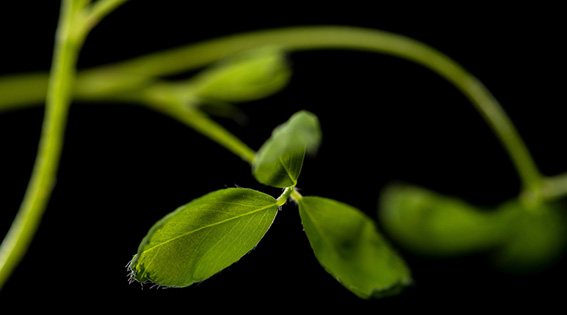 While adding salt to plant foods being cooked is generally perceived as a necessity, adding salt to food crops growing in fields is not. However, the Earth’s soil is becoming more saline, and as it does, growing crops becomes more difficult or impossible. Scientists at Brigham Young University (BYU) may have discovered a way to prevent soil salinity from ruining crops and crop yields.

Climate change, soil erosion, soil degradation, and depleting freshwater resources all contribute to a steady rise in soil salinity. Reusing the same land repeatedly to grow crops also increases the salinity of arable soil. The increasing salinity of arable soil causes billions of dollars in crop losses every year. But there are some plants that are naturally tolerant of salty soil; these include crops such as barley, rye, safflower, and sugar beets. Researchers at BYU have determined that the roots of plants that are naturally salt tolerant contain certain bacteria that play a role in salt tolerance.

After isolating two types of bacteria that foster the growth of plants in salty soils, the BYU scientists used the bacteria to inoculate alfalfa seeds, which should make alfalfa plants grown from the inoculated seeds more tolerant of salt. In laboratory and greenhouse studies, the scientists planted the inoculated alfalfa seeds in high-salt conditions, and the alfalfa grew very well. The BYU researchers concluded in a press release that it may now be possible to grow crops in soils with high salinity by inoculating the seeds with bacteria from salt-tolerant plants.

A recent study published in the Journal of Functional Foods found that caffeine consumption may help to mitigate some effects of an unhealthy diet by reducing lipid storage in fat cells and triglyceride production.

One Philly cheesesteak—hold the sodium March 12, 2020

The high sodium in a Philly cheesesteak may be a contributing factor to the alarming number of Philadelphia residents with high blood pressure. Food and culinary researchers at Drexel University recently developed a food product that helps Philadelphians continue to enjoy cheesesteaks without guilt.

Researchers at Colorado State University wondered whether supplementing weaning foods with rice bran would improve the outcomes of malnourished infants.

The U.S. Department of Agriculture (USDA), PepsiCo, food logistics company McLane Global, and the Baylor University Collaborative on Hunger and Poverty are teaming up to provide nearly a million meals a week for students in rural schools closed due to the COVID-19 outbreak.

Research firm Nielsen has identified what it describes as “six key consumer behavior threshold levels” tied into the COVID-19 outbreak.

Food industry leaders took part in a teleconference to update U.S. President Donald Trump on the situation over the weekend, and President Trump urged consumers to avoid hoarding essential food supplies in a news conference on Sunday.