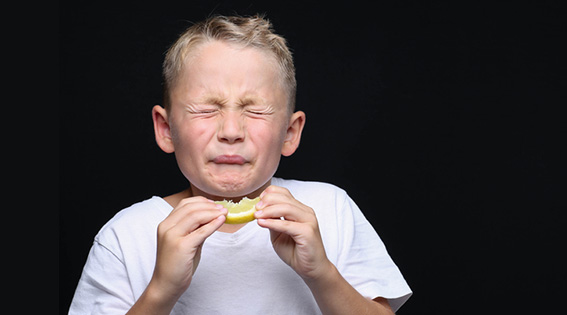 Taste buds, which are located on the tongue and palate, contain taste receptor cells. When we taste food, taste receptor cells that are specific to each of the five basic tastes (sweet, sour, salty, bitter, and umami) are activated and release signals that travel through the gustatory nerves to the brain—telling it that the chemicals in the food are perceived as one of or a mix of the five basic tastes. Foods that taste sour are high in acids (they have a low pH and a high concentration of H+ ions), and acids are detected by type III taste receptor cells (TRCs). The researchers wanted to know how the tongue actually senses the components of this low-pH environment and what molecule functions as the pH sensor.

To determine this, the researchers examined the otopetrin 1 gene (Otop 1), an ion channel (allows charged ions to move through cell membranes), and a protein that the Otop1 gene encodes. Previous research examined a number of genes that could encode a sour-taste sensor. For the current study, the researchers chose Otop1. “The proton-selective ion channel Otop1 is expressed in type III TRCs and is a candidate sour receptor,” write the researchers in the study.

They genetically deactivated Otop1 in mice to test Otop1’s contributions to taste cell and gustatory nerve responses to acids, according to the study. The results showed that the cellular and gustatory nerve response to acids was “severely diminished” in the mice that had Otop1 genetically deactivated, meaning that Otop1 operates as a sour taste receptor, according to the researchers.