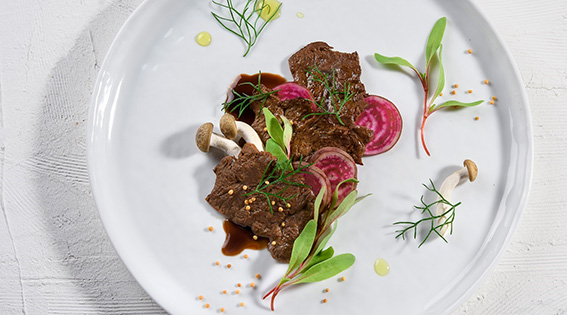 An Israeli company has produced what it says is the first lab-grown steak, cultivated from a few cells isolated from a living cow and nourished in the labs of Tel Aviv–based Aleph Farms. Several other companies have touted the development of cultured meat burgers and/or chicken-like nuggets, but experts agree that creating a product with the taste and texture of steak is even more complicated.

“Meat is a complex tissue made of several types of cells growing together into a given 3-D structure,” says Didier Toubia, co-founder and CEO of Aleph Farms. He explains that the difficulty lies in “finding the right conditions for different types of cells to grow together, the same as in their natural environment, and making them interact in order to reproduce the natural structure of meat, which is a complex muscle tissue.”

Aleph Farms is co-developing its lab-grown meat based on a “tissue-engineering” platform developed for a medical application by Shulamit Levenberg, a professor of biomedical engineering, at the Technion, a public research university in Haifa, Israel. “Professor Levenberg is a leading researcher in that field (tissue engineering) with a unique experience in growing skeletal muscle tissue in vitro for ‘fixing’ damaged muscle in a patient,” says Toubia. “This know-how is unique and grants Aleph part of its competitive advantage.”

The process combines six different technologies, which will allow the company to reduce production costs. It makes use of an animal-free growth medium to nourish the cells and bioreactor tanks in which the tissue is grown.

“The steak we introduced is intended to demonstrate our capability to achieve our goal and grow steaks,” says Toubia. “It is a prototype, which is not yet produced according to fully scalable processes and does not yet meet all commercial product requirements.” The prototype steaks are small and thin, so next steps involve increasing the dimension of the steak, Toubia says. Nonetheless, he adds, “The technology we developed marks a true breakthrough and a great leap forward in producing a cell-grown steak.”

New research presents interesting findings on how wild strains of molds evolved into the ones used in cheese production today.

The latest research published in Environmental Science & Technology showed that tiny mealworms are not only able to eat and digest various forms of chemical-laden plastic waste, but they also remain safe as a protein-rich food source for other animals.

The persistence of microplastics in water February 13, 2020

Researchers at the University of Surrey and Deakin’s Institute for Frontier Materials investigated the effects of plastic pollution in water. They determined that the freshwater that enters water and wastewater plants contains perhaps millions of tiny pieces of plastic that existing water treatment plants are not designed to detect, remove, or effectively treat.

Scientists at Washington State University have developed a process to make macaroni and cheese shelf stable for up to three years.

There’s little consensus about the definition of clean label, but its powerful implications for product development and reformulation are indisputable. Here’s a look at how companies are selecting ingredients and articulating cleanliness.

A look at emerging and trending ingredients that are allowing product developers to create products that meet the demands of today’s consumers.

Keeping food safe and fresh is a key part of the product development cycle. Various preservatives, antioxidants, antimicrobials, and extracts help reduce the growth of mold and pathogens, prevent oxidation, and stabilize flavors, colors, and aromas. These ingredients include chemical preservatives and a growing class of naturally derived or plant-based compounds.

Flavorists, chefs, and trendspotters predict the leading flavor trends that consumers will seek out in the coming year on their quest for global taste experiences and healthier foods and beverages.

Coloring Foods: It's Only Natural December 1, 2019

A look at how GNT Group sources and markets its naturally sourced coloring foods.

Nestlé Waters has announced that the entire plastic bottle range for the Swiss mineral water brand Henniez is now made of 75% recycled PET plastic (rPET).

Indoor grower BrightFarms has opened its largest greenhouse to date, which has the capacity to produce more than 2 million pounds of fresh produce annually.

The Food and Agriculture Organization (FAO) has launched the United Nations’ International Year of Plant Health (IYPH) for 2020, which aims to raise global awareness on how protecting plant health can help end hunger, reduce poverty, protect the environment, and boost economic development.

U.S. households may waste nearly a third of their food January 24, 2020

A study published in the American Journal of Agricultural Economics calculated that American households waste, on average, almost a third of the food they acquire—a value of $240 billion annually or $1,800+ per household/year.