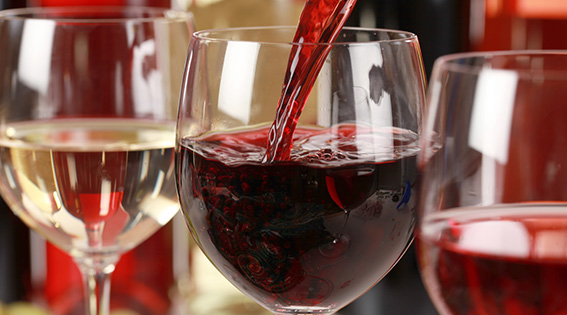 Having a diverse gut microbiota is a sign of gut health, and new research from King’s College London suggests that red wine can help provide it.

A team of researchers from the college’s Department of Twin Research & Genetic Epidemiology studied the effect of beer, cider, red wine, white wine, and spirits on the gut microbiome of a group of 916 female twins from the United Kingdom. Their study showed that the gut of red wine drinkers contained a greater number of different bacterial species compared with those who did not drink it. White wine, beer, or spirits did not produce the same effect.

“While we have long known of the unexplained benefits of red wine on heart health, this study shows that moderate red wine consumption is associated with greater diversity and healthier gut microbiota that partly explain its long debated beneficial effects on health,” says Caroline Le Roy, first author of the study. The researchers attribute the benefits to the fact that red wine is rich in beneficial polyphenols, which serve as “fuel” for the microbial population of the gut.

More good news for red wine lovers: The study findings, which appear in the journal Gastroenterology, also showed that drinking red wine was associated with lower levels of obesity and “bad” cholesterol. The effect of red wine on gut microbial diversity held true for three different study cohorts: one in the United States, another in the United Kingdom, and another in Belgium.

The scientists aren’t advocating going overboard with red wine drinking. “Although we observed an association between red wine consumption and the gut microbiota diversity, drinking red wine rarely, such as once every two weeks, seems to be enough to observe an effect,” says Le Roy. “If you must choose one alcoholic drink today, red wine is the one to pick as it seems to potentially exert a beneficial effect on you and your gut microbes, which in turn may also help weight and risk of heart disease. However, it is still advised to consume alcohol with moderation.”