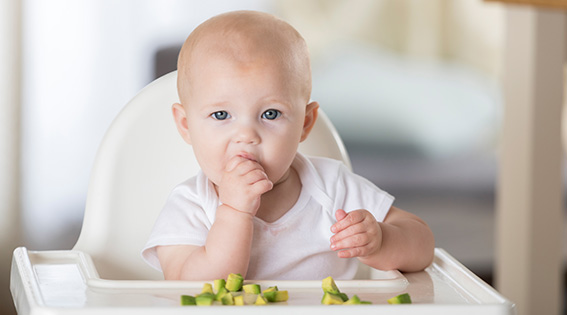 The ketogenic diet, a high-fat, low-carbohydrate, and protein-restricted diet, has been recognized as an effective treatment for intractable epilepsy. In a review of 10 years of experience with the diet, researchers at Ann & Robert H. Lurie Children’s Hospital of Chicago determined it to be an effective option for infants with intractable epilepsy.

“Overall, we observed that ketogenic diet continues to be a safe, effective, and well-tolerated treatment for patients under three years of age with drug-resistant epilepsy,” says study author John Millichap, an epilepsy specialist at Lurie Children’s and associate professor of pediatrics at Northwestern University Feinberg School of Medicine. “Based on our experience, clinicians could consider offering ketogenic diet earlier to infants diagnosed with genetic epilepsy, perhaps even before it becomes clear that the patient is not responding to anticonvulsant medication.”

The ketogenic diet helps control seizures by reducing fluctuations in blood sugar, which reduces hyper-excitability in the brain, explains Millichap. Generally, it is only in the last few years that epilepsy specialists have begun offering the diet to younger children, and most studies in infants have only included babies with infantile spasms. The current report from Lurie Children’s describes experience using the diet with a large population of young patients with various types of epilepsy that began in infancy, with the youngest patient being only three weeks old.

Out of 109 children in the study, close to 20% achieved complete seizure control after three months on the ketogenic diet, and nearly 40% had significant seizure reduction (more than 50%). In children with genetic causes of epilepsy, outcomes were even more favorable, with nearly half experiencing more than 50% seizure reduction. Millichap and his colleagues found that the age of seizure onset or the age at which the ketogenic diet was initiated were not related to the eventual seizure outcome.

“The ketogenic diet is challenging to maintain, and parents need extensive multidisciplinary support, especially during the complicated period of solid food introduction,” says Millichap. He also recommends performing genetic testing as early as possible to ensure that the most precise treatments can be provided immediately. “Large, multicenter studies are needed for us to establish which genetic epilepsy syndromes respond best to the ketogenic diet so that we can add it to our precision medicine toolkit,” he adds.

Sour is one of the five basic tastes that humans can detect, and researchers from the University of Southern California have identified a sour taste receptor that sheds light on how sour taste is sensed.

A team of 12 students from the Department of Biotechnology and Food Engineering at the Technion – Israel Institute of Technology has won a gold medal at the International Genetically Engineered Machine (iGEM) competition in Boston for its bee-free honey.

Episode 15: Beyond Clean Label: A Look at Functional Ingredients and Value-Added Nutrition November 26, 2019

This episode examines the emergence of food with a purpose and feature insights about what this means for different generational groups, upcoming trends and more.

Scientists at the University of Massachusetts–Amherst (UMass-Amherst) recently completed a study on the effects of foods fried in vegetable oil in animal models.

Surface texture of food can impact perceptions of healthiness January 10, 2020

A study published in the journal Food Quality and Preference shows that the surface texture of food products may change consumers’ perceptions of the product and promote healthy eating.

Campbell Soup has announced that, effective Feb. 1, 2020, Carlos Abrams-Rivera, president of Campbell Snacks, will leave the company to accept a role at another corporation.

Motif FoodWorks, the animal-free ingredient company, has announced a partnership with the University of Queensland (UQ) in Brisbane, Australia, to test and identify new formulations to improve the texture of plant-based meat products through in vitro processing.