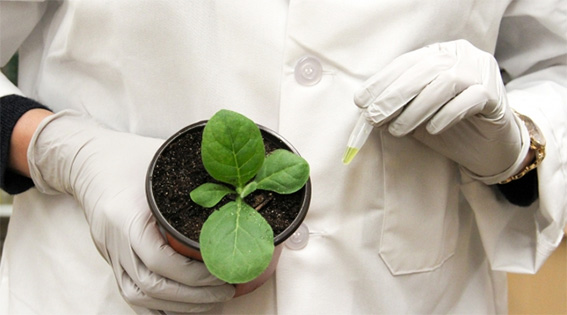 As the world’s population grows and changes, more food is needed. A group of researchers at the Massachusetts Institute of Technology (MIT) is working to increase food production by making it easier for cereal crops like wheat, corn, and rice to grow without fertilizer.

These major food crops rely on fertilizers to provide nitrogen, which is necessary for their growth and production of large amounts of food. More than 3.5 billion people depend on food that requires added fertilizers, such as manure, compost, and chemical fertilizers.

However, there are some food crops—like legumes—that do not need fertilizers because they can produce their own nitrogen. Legumes do this by harnessing bacteria that can fix nitrogen from the air and put it into the soil. Then the plant draws up the nitrogen through its roots.

The Voigt lab in MIT’s Department of Biological Engineering has been working for four years to transform cereal crops so that they can fix their own nitrogen. The research team, led by Christopher Voigt, MIT’s Daniel I.C. Wang professor of advanced biotechnology, has made progress toward this goal, and their research is detailed in Nature Microbiology.

Voigt and his team have targeted the specific genes in the nitrogen-fixing bacteria that have a symbiotic relationship with legumes. If these genes, known as the nif genes, can be successfully transferred and expressed in cereal crops, these crops would be able to obtain nitrogen on their own and would no longer need fertilizers to add the nitrogen they need.

However, transferring the nif genes to cereal crops is very challenging genetic engineering, especially because the nif pathway is extensive and involves many genes, which are controlled by a precise system of interconnected genetic parts. To be able to transfer these genes so that they can maintain their nitrogen-fixing capabilities, scientists must not only transfer the genes but also replicate the cellular components responsible for controlling the pathway, according to MIT News.

Another challenge is that the microbes that fix nitrogen in legumes are bacteria, which are prokaryotes, and plants such as wheat and corn are eukaryotes. That means “the gene expression is completely different,” Eszter Majer, a researcher in the Voigt lab, told MIT News. To get around that challenge, the Voigt lab is targeting organelles within the cell rather than the entire plant cell.

With help from international experts, the project is making progress. If the team is successful in producing cereal crops that can fix nitrogen on their own without fertilizer, it could transform global food production.