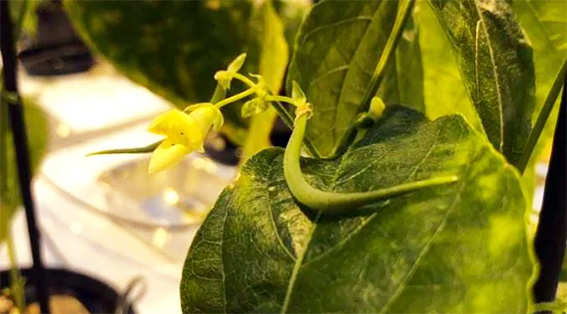 Astronauts are expected to make the first human mission to Mars sometime in the 2030s. In the eight months that it will take to get to Mars, the astronauts will be producing a lot of urine. Fortunately, the technology already exists to recycle most of the urine into potable drinking water. However, researchers are now looking at another component in urine that the astronauts may find useful once they land on the red planet—struvite. Otherwise known as NH4MgPO4 (6H2O) (ammonium magnesium phosphate hexahydrate), struvite makes an excellent fertilizer for agriculture. Researchers at Wageningen University & Research are exploring struvite’s use on crops grown in soils with similar compositions to that found on the moon and Mars.

In 2019, lead researcher Wieger Wamelink, senior ecologist at Wageningen, set up a crowdfunding page to raise money to test the use of struvite derived from human urine on a crop of beans grown in artificial lunar and Mars soil and began the experiment in late November.

“We expect that humans will return to the moon and go and live on Mars, and then we will have to feed them,” says Wamelink. “This [food] has to come from the site, because flying in food would be too costly and also, especially for Mars, too unreliable.” And because the soils from the moon and Mars are “quite different in composition and structure,” explains Wamelink, “we need to test them both.”

According to Wamelink, the lack of wind and water on the moon and the origin of the moon regolith (the layer of loose, heterogeneous superficial deposits covering solid rock), lunar soil is very sharp, which affects plant roots. On the other hand, Martian regolith is smoother because of the winds and the effect of past water streams. Martian soil is much more clay-like than lunar soil, which means it can hold more water, an attribute that lunar soil lacks.

According to a university press release, the researchers filled 60 pots with artificial lunar and Martian soils, as well as control samples of normal earth potting soil. The pots were filled with either 250 grams of potting soil or 750 grams of lunar or Martian soil and 250 grams of water. In half of the pots, they added 15 grams of struvite, which was obtained from wastewater purification installations in the Netherlands. They planted three beans in each pot, and if more than one bean sprouted, the smaller beans were removed from the pot after two weeks, leaving just one plant per pot. The plants were automatically watered daily and kept under greenhouse conditions.

The first plants started budding on December 20, followed by the first beans appearing a few days later. “We harvested beans for two weeks, after which the plants started to flower again, and at the end of the experiment, we had a second, much smaller harvest,” says Wamelink. “All together, we harvested over 2 kg of beans [fresh weight].” The crops planted in potting soil and lunar soil simulant with struvite experienced the strongest growth. While the beans planted in the Martian soil with struvite showed more promise than the lunar soil at the beginning of the experiment, their growth lagged toward the end. And the plants that had no struvite added showed the poorest growth.

“What was really surprising was that the beans in moon soil simulant with urine addition almost outperformed our Earth control (potting soil),” notes Wamelink. “In all previous experiments, that was never the case, and the harvest was almost always about half or less than the Earth control. This could be an effect of the addition of the urine, which contains a lot of phosphorous.”

Up next, Wamelink wants to study how human feces can be recycled and used to grow crops. “Further work on bacteria is also very important, especially the bacteria that mineralize dead organic matter (including the feces),” says Wamelink. “Can they survive in the soils and do their job? Can they survive on their own, or do they depend on other bacteria species?”

There’s a lot to figure out before humans can successfully travel to and live on Mars, but this research gets us one step closer to supplying one of the necessities of life—food.

An interview with Ryan Riddle.

An overview of formulating reduced-sugar products with a focus on natural sugars.

The U.S. Department of Agriculture (USDA) has released its annual Technology Transfer Report, which highlights agricultural innovations from scientists and researchers that are solving problems for America’s farmers, ranchers, foresters, and consumers; and creating opportunities for American businesses.