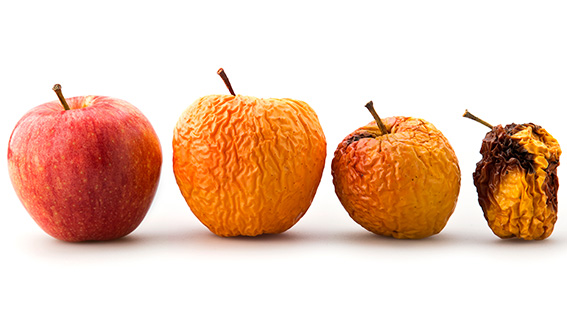 “Ethylene is a big part of how nature regulates itself,” says Timothy Swager, John D. MacArthur professor of chemistry at MIT and lead author of the study, which is published in ACS Central Science. “It causes fruit to ripen, can cause trees to lose their leaves, triggers the blooming of flowers, and can be used to prevent potatoes from sprouting. Basically, it is the most important gas for ag and food. There are no commercial sensors that can reliably detect ethylene in a distributed manner that is needed.”

The new sensor is composed of carbon nanotubes and a metal catalyst called palladium, which, upon interaction with ethylene, undergoes a process called Wacker oxidation. Through this process, palladium temporarily gains electrons that it passes to the carbon nanotubes, filling up the empty holes in the electronic structures and making them more conductive. By measuring the resulting change in current flow, the researchers can detect the presence of ethylene. And, as Swager explains, “the catalyst is reoxidized by air and also requires water, so it works well in the environments needed.”

In a real-world situation, the sensor can be used in shipping containers to make decisions about to which destination each crate should go. For instance, if the ethylene emissions in one crate of produce show that it has a shorter shelf life than others, it can be delivered to a closer destination. Grocers can also use the sensor to evaluate the materials coming into their stores, monitor produce, and revise pricing according to shelf life. And at home, an individual could have a sensor in their refrigerator that alerts them to consume produce when it begins to get too ripe.

The technology developed by MIT’s ethylene research is now licensed to C2 Sense, which is developing several sensors. “Given that there are no [working] ethylene sensors on the market, it will take some time to create the demand, which will be important to drive this phase of the development,” Swager says.

When the sensors are commercially available, they may be able to help reduce food waste at home, in stores, and throughout the food supply chain.

An overview of where fats fit in the diet with a focus on healthy fats.