Thermal processing of low-acid canned foods has become more and more scientific since it was first accomplished by Nicolas Appert in the 19th century, and thermal processes have been established for all types of foods in hermetically sealed containers.

To establish an aseptic process for multiphase food products, the Food and Drug Administration requires a processor to identify and select a sterilizing Fo value for the product; develop a conservative model that reliably predicts the total lethality of the heat process; quantitatively verify the lethality delivered by means of a bioindicator; and list the critical factors of each aseptic process and the procedures to be used for controlling them. According to Section 113.83 of the Code of Federal Regulations, acceptable scientific methods for establishing heat sterilization processes include microbial thermal death time data, process calculations based on product heat penetration data, and inoculated packs.

The National Center for Food Safety and Technology, Summit-Argo, Ill., and the Center for Aseptic Processing and Packaging Studies (now called Center for Advanced Processing and Packaging Studies, CAPPS), based at North Carolina State University, Raleigh, held a Workshop on Aseptic Processing of Multiphase Foods on November 14–15, 1995, and March 12–13, 1996, to reach a consensus on what is needed to be done to develop an aseptic multiphase food process that would meet FDA requirements. Representatives of 11 universities, 5 government agencies, 22 food companies, and the National Food Processors Association participated in the workshop. Working groups discussed particle residence time, mathematical modeling, physical property measurement procedures, biological validation, and statistical design and analysis of data. The results of the conference were published in a special section, “Workshop Targets Continuous Multiphase Aseptic Processing of Foods,” in the October 1997 issue of Food Technology.

After the workshop, Tetra Pak, Inc., Buffalo Grove, Ill., used a case study from the workshop as a guide and filed a thermal process for cream of potato soup. FDA accepted the filing in May 1997, sending the company a “no rejection” letter, meaning that the process could be used. To date, however, no company in the United States or exporting products to the U.S. has pursued aseptic processing of food products containing particulates.

In the workshops, various methods for determining the residence time distribution (RTD) and temperature of the fastest-moving/slowest-heating particle were discussed. RTD measurement is needed because of the difficulty in measuring the internal temperature of the particle during continuous flow. The group felt that any of the following methods could be used: optical methods, such as particle tracking velocimetry; magnetic methods; magnetic resonance imaging; chemical markers; thermal memory cells; ultrasonic methods, which involve Doppler scattering of ultrasound waves by the moving particles; and salt tracer, which involves electrical conductivity measurements.

Ken Ghiron, Research Assistant Professor at Illinois Institute of Technology, Chicago, has been working on magnetic thermometry for the past 2½ years, the first 1½ years at the University of Illinois at Urbana-Champaign, and the past year at NCFST. The basic problem, he said, is to measure the coldest temperature of a particulate food floating in a broth as it flows through a pipe. How heat transfer occurs during processing depends on how the particle moves within the pipe. Attaching thermocouple leads to the particle would affect how it moves and heats up, a traditional thermometer wouldn’t work very well, and infrared thermometry can’t measure internal temperatures.

His pilot-plant system consists of a 2-in-diameter pipe surrounded by three separate copper coils in three different directions. A magnetic trap catches the magnet-containing particle as it exits the pipe. The temperature is sensed as follows: First, the properties of the magnetic moment are determined. As the particle passes through a copper coil, it induces a voltage in the coil, which can be measured. He uses three copper coils, each measuring the projection of the magnetic moment along the three orthogonal axes x, y, and z. The voltages are then integrated to remove any velocity dependence. That gives a signal proportional to the magnetic moment of the particle. It depends on temperature.

Once we know the interior temperature of the particle, he said, we can determine the heat transfer coefficient, how heat is transferred to the particle. The fluid temperature is measured by a platinum resistance thermometer.

The magnetic material is a ceramic magnet, “Ceramic 8,” made of barium ferrite heat treated to give it standard magnetic properties. Ghiron embeds the magnet in a 3/8- to ½-in cube of polypropylene that simulates a food particle. The simulated food is a little more predictable and rugged than actual food, he said—it won’t break apart like a potato might, thus resulting in fewer errors. He plans to also conduct studies with actual food.

He has a patent on the concept of magnetic thermometry in aseptic processing. He will describe his system and results so far at the NFPA convention in Chicago on Oct. 26–31.

Initial financing for Ghiron’s project came from CAPPS and the State of Illinois Council for Food and Agricultural Research.The next step, he said, is to use the system to validate mathematical models so they can be used to design a process and verify it without having to put magnets into each food. If a process deviation occurs, we would have a mathematical model that would recalculate the process and tell whether the product is safe or not. It would be relatively inexpensive to file processes with FDA.

NFPA has a mathematical model for aseptic processes with particulates (low-acid and high-acid), and Ghiron plans to work with them with his system to validate their model. FMC Corp. also has a mathematical model, and he is proposing to test it, as well. Ghiron said that it would take at least 1–2 years to get the models sufficiently validated. Hopefully, a company such as Campbell would be interested enough to develop and file a process for a particular product such as mushroom soup or potato soup.

Ken Swartzel (phone 919-515-2951), William Neal Reynolds Distinguished Professor and Head of the Dept. of Food Science at North Carolina State University and Managing Director of CAPPS, said that there has been a lot of work on indirect methods of measuring the thermal history of particles. They include a thermal memory cell, alginate cubes containing spores, and chemical changes, such as enzymes, blue dye No. 2, and sucrose inversion.

He developed and patented in the early 1990s a thermal memory cell, a unit that has no power source but has a thermal memory. The cell is based on diffusion of a variety of metals through a silicon base. The different metals diffuse at different, temperature-dependent rates. The cell can be made incredibly small, he said, but it was not commercialized.

The ultimate temperature sensor, he said, would be noninvasive, perhaps something on the pipeline itself.

Swartzel and his coworker Josip Simunovic at CAPPS are also using magnets to study particle residence time distribution. Current recommendations for establishing the fastest-particle residence time, they said, require at least 299 measurements. This requires considerable expenditures of time, product, and energy when the particles are tested one at a time, because each particle must pass through the entire system before the next one can be inserted, to avoid mis-identification of the particles. They have developed a method that overcomes these problems. 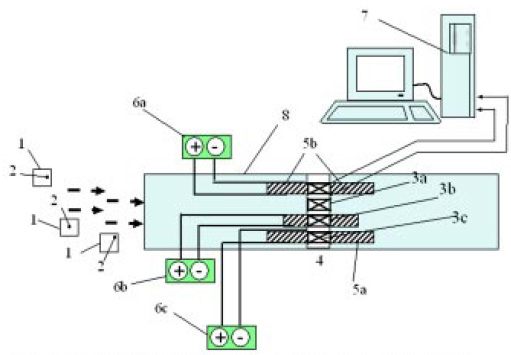 In a paper presented at the 1999 IFT Annual Meeting in July, they reported on the development of a patented flow monitoring system—the Magnetic I.D./Timed Insertion Particle (MID/TIP) system—that uses multiple magnetic identification tags to determine particle residence times. They use simulated food particles in the shape of spheres or cubes containing different configurations of magnets and passes them through a stainless-steel tube surrounded by an array of magnetoresistive sensors connected to a data acquisition system. The MID/TIP system was able to detect and identify each tested particle. 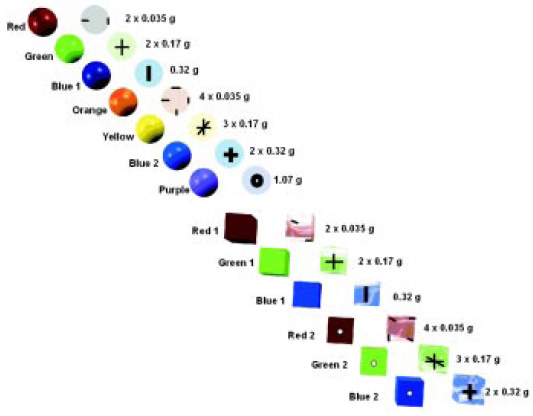 They found that by using multiple magnetic I.D. tags, they could reduce the time for validation of a process from 8 hr to about 1 hr. That starts to make it economically feasible, Swartzel said, adding that Tetra Pak, in its validation studies on the potato soup, took days for validation, using one particle at a time. The magnetically tagged particles can also accommodate thermal history recording devices, such as the thermal memory cell, and microbial loads, such as bacterial spores. This would provide process biovalidation concurrently with particle flow monitoring.

CAPPS—whose mission is to conduct industrially relevant research directed at developing methods and technologies for the safe production of marketable, high-quality aseptic and refrigerated, extended-shelf-life products—was created at NCSU in 1987 and expanded to include the University of California-Davis in 1994 and Ohio State University in 1998. Each site receives operating support from the National Science Foundation and has industrial members.

Swartzel said that one of its member companies has implemented—but is not yet ready to talk about—a complete magnetic I.D. particle flow monitoring system with a potential for integrating process validation tools into the particles.

Method for browning precooked, whole muscle meat products. U.S. patent 5,952,027, filed 5/11/1998, issued 9/14/1999 to P.S. Singh, assigned to Swift-Eckrich, Inc. Describes a method of producing a crisp surface and imparting a uniform golden-brown color to a precooked whole muscle meat product. Precooked meat is coated with a browning liquid pyrolysis product, then exposed to an energy source that selectively heats the coated surface of the product at a temperature and time sufficient to develop a golden-brown color on the exposed surface, without substantially shrinking the product, imparting an objectionable smoky flavor, or forming an oily surface. Suitable energy sources include circulating air ovens, impinging air ovens, laser light sources, medium-wavelength infrared radiation sources, and microwave radiation. The browning liquid pyrolysis product may be obtained from the pyrolysis of hardwoods or sugars.

Enzyme extraction process for tea. U.S. patent 5,952,023, filed 6/27/1997, issued 9/14/1999 to G.L. Lehmberg et al., assigned to Lipton, Div. of Conopco, Inc. Describes a process for preparation of acid-stable instant tea by enzymatic extraction of black tea leaf using an enzyme cocktail adjusted to a critical pH. Black tea is extracted with water containing tannase and one or more cell wall–digesting enzymes, such as cellulase, pectinase, hemicellulase, or Viscozyme, at a pH of 4–10. The resulting extract can then be pasteurized, polished, and made into a finished beverage or concentrated and dried in the usual manner. The resulting natural tea products have improved acid stability, good color, and good clarity.

ULTRASONIC CUTTING of food products, ranging from bakery, snack, and confectionery products to dairy products and vegetables, is accomplished by the technique called ultrasonic food processing. The technique uses high-frequency sound vibration to cut products faster and more cost effectively while eliminating many of the problems commonly associated with conventional cutting and slicing equipment. The technique is said to be particularly useful in avoiding sticking problems in the cutting of low-fat pastries, snacks, bakery, ice cream, cheeses, and other products that have fat removed from them. A high-frequency knife moving at 20,000 vibrations/sec creates a nearly frictionless surface between it and the product, resulting in a significant reduction in sticking problems. It also avoids “pinching” of products that conventional knife cutting causes. For more information, contact Dukane Ultrasonics, 2900 Dukane Dr., St. Charles, IL 60174 (phone 630-584-2300, www.dukane.com/us) —or circle 363.

ELECTROSTATIC COATING SYSTEM, the Model EDT Pilot, coats meats, cured hams, poultry, and processed meats with a combination of gelatin and a bactericide to control Listeria monocytogenes. The coating is fluidized to separate the powder into individual particles which are then pneumatically conveyed to spray nozzles, each of which houses an electrode that negatively charges the particles. The charged particles are then focused onto the food product, providing a uniform, micro-thin layer on even irregularly shaped products. There is no overspraying, eliminating waste and minimizing cleanup, and the bond created by electrostatic coating is said to be far stronger than any surface or friction attraction, so that the coatings remain a permanent part of the product. For more information, contact Kitto Coating Technologies, Inc., 8257 E. Del Cadena, Scottsdale, AZ 85258 (phone 602-607-3210, fax 602-992-8152)—or circle 365.

Updates to the Sound Images website are being made daily and direct online ordering features will be added soon.