Organic, all-natural, additive/preservative-free, and GMO-free foods—call them what you will—are all part of the growing mainstream desire for cleaner, purer, and “close-to-nature” foods. With fortified and functional foods, they’ll represent one of the strongest and most sustainable health-driven markets for decades to come.

The growth curve is likely to continue at an unprecedented pace. In the Food Marketing Institute/Prevention “Shopping for Health 2000” survey, 66% of grocery shoppers said they try to avoid products with artificial preservatives/additives. Shopper’s concerns, literally coming out of nowhere this year, jumped a whopping 56 points since 1995. One of the major beneficiaries was organic products. One in three shoppers bought organic foods to “maintain health,” and one in four actively sought out information on the benefits of organic products. Health is clearly the driving factor for organic purchases: 57% buy organic foods because they believe they offer positive “long term personal health effects,” have a higher nutritional value (54%), taste better (27%), and are fresher/or more “in season” (26%). All of these reasons rank higher or equal to organics’ environmental (including pesticides) impact (16%).

Organically grown foods are particularly important to younger and ethnic shoppers, and, unlike other health-directed markets, income does not appear to affect interest. FMI/Prevention reports that one-third of Generation Xers and Boomers believe that organic products are “very important.” Only a quarter of Caucasian shoppers (25%) place high priority on organic foods, but African-American (37%) and Hispanic (39%) shoppers show a stronger interest. Nine out of ten shoppers who bought organic foods purchased produce. One in five bought organic cereals, breads, or pasta; 13% organic meats or poultry; 10% organic eggs, soups, or sauces; and 9% organic milk. 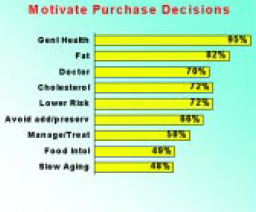 Media attention and the focus placed on GMO-free foods by chefs and culinarians are also fueling the “clean food” movement. More than likely, with only 14% of shoppers saying they have “read a lot about” GMOs and 28% having “heard or read some,” shoppers’ knowledge level remains low on this issue. According to FMI/Prevention, more than six out of ten grocery shoppers find the following uses of biotechnology acceptable: to grow foods that include substances that may help prevent disease (phytochemicals) (69%); to grow foods that taste better (66%); to lower the fat content of foods (63%); to grow foods that are resistant to insects and other pests (62%); to grow food that will stay fresh longer (62%); and to decrease the costs of growing foods (62%).

But we shouldn’t stop worrying about GMOs yet. The acceptability of genetically modified foods for all of the above applications has decreased slightly since 1995. More than half of shoppers surveyed agreed that “science doesn’t know enough yet to control this issue”; one in three expressed concern that “genetically altering foods is dangerous to the environment”; and a similar proportion felt that “the benefits of genetically engineered foods outweigh the risks.”

The concerns about GMOs and cleaner foods have driven the development of new premium markets. Heirloom vegetables, fruits, herbs, beans, nuts, grains, and spices—grown from seeds used for generations—are one category in high demand by chefs and retailers alike. High-nutrient commodities created by higher nutrient feeds, such as Gold Circle Farms’ high-DHA, omega-3, and vitamin E eggs and GoodHabits’ beef, eggs, and chicken, are another example. Mann’s Broccolini is a tasty hybrid that has created unprecedented demand among high-end chefs and restaurants.

A number of producers are benefitting from marketing campaigns that remind consumers that their livestock only drink pure water, are grass fed, or roam free in the fresh air. The California dairy association reminds us that with the beautiful weather, they have happy cows. Now, who wouldn’t think that milk tastes better from happy cows?

It’s only a sign of things to come. Passively improving health through minor purchasing changes, perceived as important, is easy to do. Consumers appear to want to purchase more ultra-natural, super-clean, additive-free, “happier and healthier” livestock and crops.