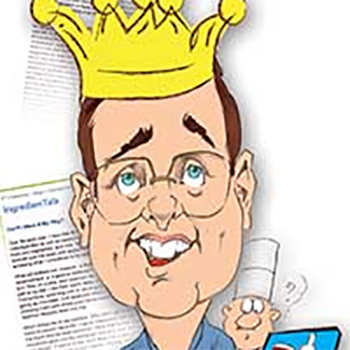 The term “hot and spicy” could easily describe Suppliers’ Night 2000, held by the IFT Chicago Section on November 8 in Rosemont, Ill. Among the ingredients highlighted at the annual event were a variety of spices and seasonings, especially the hotter types. 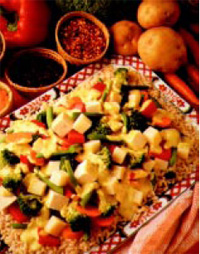 Let’s look at a few of these, after which we’ll discuss some of the emerging trends they may represent.

Masalas (“mixture of spices”), made by blending and sometimes roasting dried and ground herbs and spices, are said to be the building blocks which provide distinctive character to dishes from various regions of India. Aquaresin® Garam Masala (997158) is based on extracts of coriander, cumin, fennel, cinnamon, clove, cardamom, bay, black pepper, ginger, and mace. Aquaresin Curry Masala (997159) uses additional extracts of chili, garlic, and turmeric. Aquaresin Tandoori Masala (997265) is designed for use in the traditional Tandoori style where spices are mixed with a yogurt coating or marinade for meat, poultry, and fish.

Tikka, a mildly spiced meat dish with low pungency, is very popular in India. Tikka seasoning is mixed with yogurt and used as both a marinade for meat or poultry and as an accompanying sauce. Aquaresin Tikka Spice (967500) is said to produce an authentic Tikka spice profile. The application can also be customized by using extracts of cumin, coriander, fenugreek, mustard, and red pepper.

According to the manufacturer, the Indian seasonings and spices available have a balanced and consistent pungency which can be adjusted using capsicum extracts.

Also highlighted was a recently introduced seasoning, Smoked Chili Rub, for “south of the border” barbecue. The rub—a combination of chipotle, hacienda, ancho, and jalapeño peppers, with a hint of tomato and brown sugar—can be used on meat or fish, followed by grilling, baking, or broiling. The spice mixture forms a flavorful crust, seals in juices, and provides a warm sensation.

According to the report, compiled by McCormick flavor experts and premier American chefs, the current top spices are basil, cinnamon, cumin, dill, fennel, ginger red pepper, rosemary, and thyme. While brown spices (such as cinnamon, allspice, and nutmeg) which have been typically used by Americans in desserts are moving to the main course, savory herbs are finding their way into desserts. Chefs also say that diners often prefer to sample a variety of small dishes, rather than the traditional appetizer-and-entree combination.

Furthermore, by pairing the top flavors with an expanded variety of ingredients now available, each region has developed its own unique cuisine. For instance, the Pacific Northwest uses Thai, Cuban, and Japanese elements, and caters to vegetarian enthusiasts as well. In Florida, Hispanic and Caribbean influences have created a new cuisine called “Floribbean.” Also, a new type of Hawaiian fusion is making its way to the mainland with Asian and Pacific Rim influences. For example, “Maui-Mex” is a style of cooking that combines sweet citrus flavor and pineapple with red pepper.

In other news, McCormick recently completed the purchase of Ducros, Europe’s leading spice supplier. The company acquired the spice, herb, and dessert aid business from Eridania Beghin-Say. According to the President and CEO of McCormick, “the combination of these two companies clearly establishes us as the market leader in the European spice and herb category and provides a solid platform for future growth.”

According to the manufacturer, enrobing the flavors in fat provides a number of benefits, including reduction of production costs. The flaked shortenings are offered in a variety of new flavors, including cinnamon, garlic, garlic butter, tomato basil, and Italian Seasoning. Cinnamon LP424, for example, may be used in cinnamon rolls. Enrobing the cinnamon protects the yeast, and the spice flavor is released during the baking process. The flavored shortenings may also be customized to meet individual needs.

• Snack Seasoning. Called Vaquero DB264-14, the seasoning developed by Williams Seasonings, Inc., 13301 W. 99th St., Lenexa, KS 66215 (phone 913-888-4343) is said to have a lively Southwestern flavor. Consisting of tomatoes, green chilies, chicken stock, and a touch of cilantro, the snack seasoning has been applied to popcorn and can be modified for soup and rice applications. The manufacturer recommends a usage of 20% on a slightly salted snack base.

Among its benefits, ASTA has established standard contracts that automatically give domestic and overseas buyers and sellers a common language. To back these contracts, it has developed quality standards and test methods which have become a quality benchmark worldwide.

Chipotle peppers are becoming increasingly popular in restaurants, according to FlavorTrak™, Newly Wed’s proprietary menu trend tracking system. They may be used in a wide variety of food products, including breading systems, batters, rubs, sauces, and marinades.

In addition, the company offers a comprehensive selection of dehydrated capsicum varietals including ground chipotle, ground green jalapeño, and ground ancho peppers. These varietals are said to offer superior functionality as well as consistent color, moisture, granulation, and pungency.

Newest addition to the line is Natural Jalapeño Cheese Flavor, which offers a balance of green, meaty, pepper, and cheesy notes.

The fact that spices, defined by the American Spice Trade Assn. as “any dried plant product used primarily for seasoning purposes,” played such a major part at the show should not be too surprising. In this month’s Food Technology, a feature article entitled “2001: A Spice Odyssey” (page 36) provides an update on several popular spices, looking at their functionality, health benefits, sourcing, consumer preferences, preparation, and applications. These developments, coupled with ingredients highlighted at the Suppliers’ Night, provide a clear illustration of several recent trends related to spices.

As foods from Latin America, India, Middle East, North Africa, and the Pacific Rim are emerging into the mainstream, spices and spice combinations are finding new opportunities for rediscovery.

In these dishes—which themselves may fuse with those of other cultures or regions—new combinations of spices are being used to create products with bolder or more novel flavors. For example, red and black peppers may be used with warmer flavors such as cumin, ginger, or thyme. Or hot spices may be used with sweet ingredients such as brown sugar, maple syrup, vanilla, and fruit. Furthermore, these spices may be used in nontraditional applications, such as cinnamon to accent a meat product or thyme on a piece of fruit.

The use of spices is also changing the way some foods are prepared. Spices can help bring out the flavors of the other ingredients rather than masking them. They may be used in marinades and rubs and can be combined with such cooking techniques as smoking, roasting, and toasting to infuse bolder flavors and create novel textures.

And finally, it is my suspicion that foods are continuing to get hotter and hotter. The other day I bought a bag of roasted peanuts in the shell—one of my favorite snacks. Added to the shell were red pepper, black pepper, onion, garlic, and oregano. It was quite an experience, although I would not recommend eating the shell (which also happens to be one of my favorite parts when eating this particular snack).

NEW PATENTS ON SPICES
Spices inherently have several special functions, including appetite-promoting effect; the imparting of pleasant odors; providing a range of tastes, especially hot or hot-sweet ones; masking disagreeable smells; and adding color. Furthermore, in addition to aromas and tastes, spices can have preservative, physiological, or pharmacological effects.

Several new patent developments on spices will be discussed here. (The term “spice” is used to broadly refer to both herbs and spices.) These will include water-soluble antioxidant agents derived from spices; use of rosemary extract to prevent off-flavor in irradiated meats; seasoning incorporating plant sterols to reduce cholesterol; a vitamin-and-spice–containing swine feed leading to a better quality pork product; antibacterial protein extracts derived from marigold and parika; improved solvent extraction of spices and herbs; a ginger-containing baby food with health benefits; and the development of no-heat jalapeños.

Anti-oxidation agents which are currently in widespread use are principally oil-soluble substances. Although many substances derived from herbs are known to modulate oxidation of fats, oils, and lipids, these, too, are usually water-insoluble aromatic compounds.

This patent describes a method for obtaining water-soluble anti-oxidation agents from herbs commonly used as food seasonings. Fat-removal processing of herbs is conducted by using carbon dioxide liquid and/or an organic solvent, or carbon dioxide at subcritical or supercritical conditions. Hydrated alcohol is added to the residual oil-insoluble portion. Activated carbon is added to the resulting hydrated alcohol-containing extraction solution. After stirring, the activated carbon is removed. From the resulting solution, water and alcohol are removed, and a water-soluble anti-oxidation agent is obtained.

A method for reducing the development of radiation-induced off-flavors and aromas, delaying the onset of oxidative rancidity during storage, retarding development of meat flavor deterioration or warmed-over flavor upon cooking and reheating, and preserving the flavors of seasonings present in irradiated meat or meat products is described. The method incorporates the use of a stabilizing amount of rosemary extract or rosemary extract in combination with tocopherols, ascorbic acid, citric acid, or sodium tripolyphosphate, prior to exposing the meat to ionizing radiation, to enhance the flavor and shelf life of the product.

This patent discloses a method of treating a food seasoning food ingredient, or food composition such that upon ingestion it results in a decrease in serum cholesterol and blood pressure. The method incorporates plant sterols and/or stanols or their derivatives together with a raised level of one or more of the minerals magnesium, calcium, and potassium.

A swine feed containing spice and 50–500 ppm of vitamin E is discussed which can produce pork with improved quality. According to the patent, when swine are raised with feed, it is possible to produce pork which gives less smell, maintains freshness and quality for prolonged periods, generates less drip, and exhibits good moisture retainability. Moreover, the growth rate of the swine is excellent.

Preferred examples of spices which may be used include nutmeg, oregano, cinnamon, ginger, and sage. The amount of spices to be incorporated into the feed varies depending on species and form of spices. When natural spices are used, they are preferably incorporated in amounts of 0.1–5% by weight of feed on a dry basis, whereas when essential oils are used, they are used in amounts of 0.001–1%.

Described are protein extracts from marigold or paprika having antibacterial activity against the Gram-negative bacteria Salmonella sp. and Escherichia coli. This patent  iscloses the method of extraction and the effect of a protein extract from the seed tissue of Tagetes sp. or Capsicum sp. on the survival of these bacteria. Furthermore, the proteins and the genes that code for them could be sequenced and manipulated via genetic engineering for expression in production microorganisms via fermention.

Principal components of spice and herb plant solids are simultaneously extracted and concentrated with an edible solvent in a series of steps using a countercurrent extraction  procedure. A solution having several times the concentration of pigments and flavor, aroma, and antioxidant components of the raw material is obtained. The tissue of the residual spice or herb plant solid is ruptured in the process so as to provide  quick release of the components when utilized in a food or beverage. The degree of caramelization of the residual press solids is controlled, and the resistance to oxidative deterioration of both the extract and the residual solid is improved by control of the temperature employed.

Disclosed are baby-food compositions containing ginger which can be used in reducing gastroesophageal reflux in infants. The compositions can contain a ginger puree and one or more fruits or vegetables.