We wish to clarify Table 2, “Most Common (‘The Big Eight’) Causes of Food Allergy Worldwide,” that appeared on p. 73 of the IFT Scientific Status Summary, “Food Allergies and Other Food Sensitivities” (September, pp. 68–83). The eight foods or food groups (often referred to as the Big 8) that cause the vast majority of IgE-mediated food allergies are peanuts, cows’ milk, eggs, fish, crustacean shellfish (shrimp, crab, lobster, etc.), tree nuts (almonds, walnuts, etc.), soybeans, and wheat. The now-modified version of Table 2, shown below, reflects this list 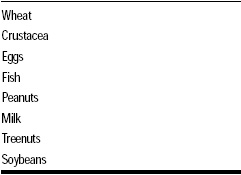 The Big 8 originated in an expert consultation conducted by the Food and Agriculture Organization of the United Nations in 1995 in Rome and was affirmed in 1999 by the Codex Alimentarius Commission. However, FAO and CAC considered all types of food allergies and other sensitivities in their deliberations. Thus, the official list of commonly allergenic foods established by CAC in 1999 includes cereals containing gluten (i.e., wheat, rye, barley, oats, spelt, or hybridized strains and products of these). Gluten-containing cereals are implicated in celiac disease, also known as celiac sprue or gluten-sensitive enteropathy. However, rye, barley, oats, and spelt are not commonly implicated in IgE-mediated allergy. Thus, the original version of Table 2 as published in the September issue may have falsely implied that rye, barley, oats, and spelt were part of the Big 8; they are not. We and others have modified the CAC list to eliminate all gluten-containing cereals except wheat and also to eliminate sulfite, a food ingredient that is involved in idiosyncratic reactions but not in IgE-mediated food allergies. Our modified version of the CAC list has become known as the Big 8 and is a listing of the 8 foods or food groups that account for perhaps 90% or more of all IgE-mediated food allergies on a worldwide basis.

We apologize for any confusion that may have been created by the original published version of Table 2; the modified version below should clarify the situation.

Reprints of the Scientific Status Summary, corrected to contain the modified version of Table 2, may be obtained by contacting IFT at [email protected] or visiting IFT’s web site at www.ift.org/publications/sss/allergens.pdf.