High-pressure processing (HPP) of foods is of interest because of its ability to inactivate foodborne microorganisms at low temperatures and without the use of chemical preservatives. This results in a higher-quality food with excellent sensory and nutritional benefits. To quantify the inactivation kinetics of microorganisms under pressure, small-size inoculated studies are frequently performed using laboratory-scale equipment (Fig. 1) to predict large-scale production behavior (Fig. 2). 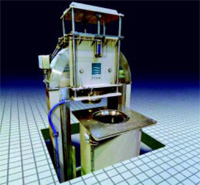 Early high-pressure laboratory equipment frequently did not include temperature sensors within the pressure chamber. As a result, the effects of compression heating and subsequent cooling under pressure were not reported. Because of the unique compression behavior of HPP, unless thermal effects are accounted for, the data generated can be difficult to reproduce, especially in larger-scale production systems.

In theory, HPP is a very predictable process. Pressure is uniformly distributed at all points within the pressure chamber. Unlike thermal diffusion–based processing, pressure is “instantaneously” transmitted to all points within the HPP chamber. Thus, regardless of the product size, the pressure exposure period is identical. Deviations from process uniformity are thus mainly due to variations in temperature that result from compression heating and subsequent heat transfer. Temperature during processing may not be uniform because of compression-heating differences between the product and the pressure media, and heat loss or heat gain between the sample, media, and the pressure vessel. 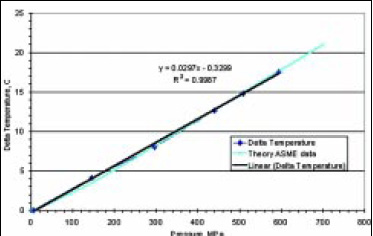 Compression Heating
Since the early work of Bridgman (1912), the adiabatic compression behavior of water has been well characterized. This adiabatic temperature change is very predictable. The change in water temperature as a result of adiabatic pressure change is shown in Fig. 3. All compressible substances change temperature during physical compression, an unavoidable thermodynamic effect. The magnitude of this change depends mainly on the compressibility of the substance and its specific heat. Gases, for example, experience tremendous compression heating, and this compression heating is the operating principle behind the diesel engine. Liquids such as water are far less compressible. As a result, the change in temperature due to compression, even at very high pressures, is relatively low. This behavior is well described by theory and can be found in software form (Harvey et al., 1996). At the pressures typically encountered during HPP (400–1,000 MPa), under adiabatic conditions near room temperature, water typically changes 3°C for every 100 MPa pressure change. Temperature increases with pressure and decreases with pressure release. 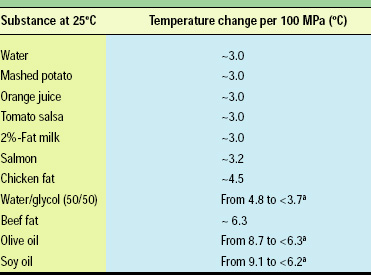 Compression-Heating Differences
Since water is a main ingredient in most foods, the compression of most foods exhibits adiabatic temperature changes very similar to that of water (Table 1). Foods that are notably different are oils and alcohol (Rasanayagam et al., 2001). Many of the early laboratory machines were not fabricated from stainless steel and necessitated the use of oils as the pressure medium. Solutions of castor oil, silicone oil, sodium benzoate, and glycol are sometimes used as pressure-transmitting fluids. If the pressure-medium fluid exhibits high compression heating, the inactivation data could include unintended thermal effects. For example, many oils have a maximum compression heating temperature three times that of water. There stands a chance that the pressure-medium fluid upon compression will heat the sample. This can lead to errors in the inactivation study (Balasubramaniam, 1999). This error can be large when a small sample size is used with a large quantity of medium fluid.

Medium heating of the sample can be avoided by the use of a medium with the same compression-heating characteristics as the sample. Thus, water frequently serves as the best medium fluid, not only from a safety and economic point of view but also from its compression-heating behavior. Since most foods are water based, the difference in compression behavior between these foods and water is relatively small. With the exception of food very high in oil content, the food and water medium can be treated as the homogeneous content of the pressure vessel.

In reality, despite the fact that the liquid and pressure vessel may have started at the same temperature, upon pressurization the compressed liquid is hotter than the metal chamber surrounding it. The metals used in pressure vessel construction are not subjected to meaningful compression heating. This deviation from the zero-heat-transfer, adiabatic assumption, makes the adiabatic temperature a maximum possible value during HPP. The difference in chamber wall temperature and content temperature results in the transfer of heat from the content into the chamber wall and a lowering of temperature during processing. If held under pressure for a sufficient time, the temperature of the pressurized liquid will eventually match the chamber wall temperature. In general, for microbiological inactivation that is benefited by higher temperatures, the longer that a sample is held at pressure under an uncontrolled temperature condition, the lower is the marginal benefit due to a decreasing temperature as a result of cooling. When this type of data is analyzed using first-order kinetics, a tailing effect can result. 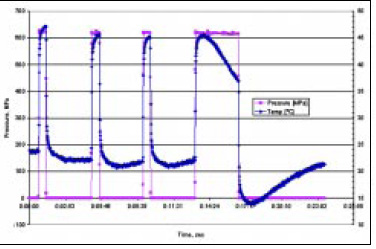 Demonstration of Effects
The effect of compression heating and decompression cooling is shown in Fig. 4. Having a small chamber volume, the test system was used to demonstrate content temperature loss during HPP. When rapidly pressurized, heat loss is insignificant and the adiabatic compression temperature can be measured. However, given some time, the compression-heated content quickly cools down, losing energy to the chamber wall. Thus, upon decompression, the temperature of the content falls below the initial starting temperature of the test. This in essence is a refrigeration cycle at work in which the refrigerant is the content of the pressure chamber. The specific values achieved in this data set are the result of the equipment setup. Adjusting the heat-transfer characteristics of the test setup can alter the measured values. 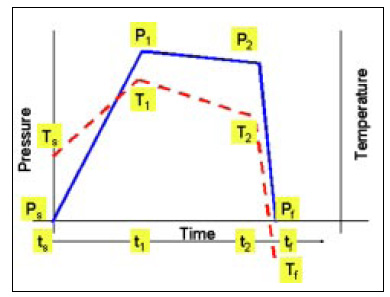 Suggestions for Reporting HPP History
It is suggested that the pressure and temperature history be reported in all HPP studies. If the actual time-based plots cannot be reproduced, then the reporting of the parameters Ps, P1, P2, Pt , Ts, T1, T2, Tt , Ts, t1, t2, tt , as illustrated in Fig. 5 can be reported. If this is not possible, then the equipment should be described to help others understand the likely conditions used in the experiments. Equipment parameters of interest would be chamber volume, pump power, chamber wall temperature, etc. It is always valuable to identify the type of pressure medium being used for testing. 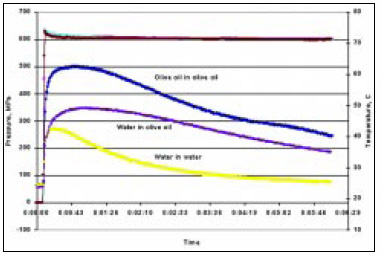 The effect of medium heating of the sample is illustrated in Fig. 6. It shows the temperature history of a water-based sample suspended in water and olive oil. As shown, the sample in oil experienced a significantly different processing history from the one in water, even though all three runs were at an identical pressure of 600 MPa. Here, the temperature history achieved reflects the experimental conditions used, and can be varied by controlling the heat-transfer characteristics of the experimental setup. It is suggested that the pressure medium used should have similar compression behavior as the sample. For most situations, the use of oil medium is not recommended for tests involving water-like samples.

The effects of changing equipment heat-transfer characteristics on the inactivation of Listeria monocytogenes Scott A inoculated in mashed Russet potato has been documented by Ting and coworkers and will be published at a later date. This and other studies illustrate that in small experimental equipment, significant microbiological inactivation differences can be accounted for by the inability of the sample to retain compression heating.

Achieving Reproducible Conditions
Research is identifying the role that temperature plays during HPP, so pressure, temperature, and time-based data should be reported to characterize the studies being performed. It needs to be noted that the effects demonstrated in this article were accomplished using exaggerated heat-loss conditions involving small samples.

Under large-scale commercial conditions, the variations in HPP temperature are likely to be less and may or may not be a critical factor in accomplishing the goal of the process. Nevertheless, knowing that these issues are important will help experimenters achieve experimental conditions that are more reproducible.

Based on a paper presented during the IFT Food Engineering Div. Symposium, “Emerging Technologies in Food Processing,” at the Annual Meeting of the Institute of Food Technologists, New Orleans, La., June 23–27, 2001. This work was funded by Flow International Corp. and a consortium of companies participating in a U.S. Army Dual Use Science and Technology Program to develop high-quality, shelf-stable low-acid foods using HPP.