Information Technology in Process Control
The same revolutions in communications and information technology that have revolutionized daily life with computers, cell phones, and smart devices have had a dramatic impact on the way factories and processes are controlled. Shawn Adams (phone 630-654-6839), Senior Systems Solutions Manager for Rockwell Automation in Burr Ridge, Ill., described this revolution with particular emphasis on the new network technologies that are available.

Traditional control systems, he said, have a variety of sensors and control devices, and controllers that connect the two. In addition, there are human machine interfaces (HMIs) that portray data and status and may permit operator actions. Typical sensors might be temperature indicators, pressure indicators, flowmeters, photocells, and proximity switches. These either generate a continuous analog signal, often conveyed as 4–20 milliamps on twisted wire pairs, or a discrete signal, such as on or off. These signals are sent to an input/output (I/O) device, often mounted in a large cabinet in a control room. Controllers interpret signals and send instructions to control devices such as valves, variable-speed drives, and on/off switches.

Early instruments and control devices used pneumatic signals with compressed air to send and receive data and instructions, and some still do. But most also generate electrical signals that can be read and understood by electronic equipment.

Driving the great revolution was the ability to put intelligence on sensors and control devices. This moved the I/O function into the field. Now a relatively inexpensive network or communications loop could be used to collect data, manipulate them, portray them on an HMI, and send control signals back to the intelligent control devices.

The challenge, Adams said, then became how to define the network so that devices could share the communications channel—what he described as the “network wars.”

Development of Networks
Instrument companies and control system vendors offered proprietary networks that were closed, in the sense that the standards, codes, and protocols were not disclosed to each other. The user was required to buy compatible instruments from the provider of the control system and could not mix and match devices from various sources.

An early proprietary protocol was created by Rosemount, a major supplier of instruments, according to Ron Helson (phone 512-794-0369), Director of the HART Communication Foundation, Austin, Tex. In 1990, Rosemount decided to make the HART technology an open protocol. The HART Foundation was later established to own, maintain and support the technology. The Foundation ensures that the technology is openly available for the benefit of the industry.

Adams described the advantages of the new networks as significant savings in initial costs due to less wiring being required. Instead of every device and sensor separately being connected back to the control point, now they are simply connected to the network loop, a much shorter distance. The network itself may be coaxial cable, twisted wire pair, optical fiber, or wireless. The choice depends on the distance involved, the signal strength, and possible noise issues. The number of connections and thus the amount of information carried obviously matters as well.

Network experts refer to various topologies or patterns of network connections. Three examples, according to Adams, are trunk and drop, which is common for conveyors; star, of which the Ethernet common to offices is an example; and ring, which is common for a large plant or campus. These topologies can be combined, and often are.

The functions of a communication network go beyond control, to include configuration of instruments and collection of additional data. Helson points out that HART communication superimposes a digital signal over the primary 4- to 20-ma signal. The digital signal can be used to confirm that the primary signal is correct, and can also report other information that the instrument may contain. Helson explained that HART communication is for continuous smart instruments, which are common in process plants. Discrete signals must be collected and handled on a different network.

The Fieldbus Foundation is another consortium supporting a different open network protocol, according to Adams. It competes with a network called Profibus, which is favored by Siemens, according to Scott Hudson (847-310- 5911), Strategic Accounts Manager, Food and Beverage, for Siemens in Schaumberg, Ill. He described Profibus as having the largest number of users and being based on Fieldbus.

He explained that Profibus originated in Europe with Siemens and Endress+Hauser, a major instrument supplier. Siemens emphasizes integration and supplies sensors, drives, programmable logic controllers (PLCs), and HMIs. In the United States, Siemens acquired the PLC business of Texas Instruments, which had been the choice of some food companies.

Hudson said that one advantage of Profibus is that it is considered reliable enough for safety functions, such as emergency stops, while some earlier networks were not so trusted.

What Is a Plant Operator to Do?
Recognizing that an existing plant has many legacy instruments and control systems, Hudson discussed some of the reasons for considering one of the available networks. First, for any new installation or retrofit, the new networks lower the costs of wiring and also the opportunities for errors, since there is less wiring to be done. Errors in installation not only create risks of incorrect information, but also incur costs when they are corrected. 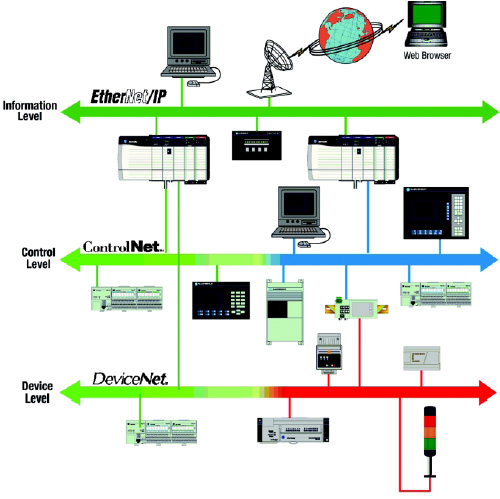 Some of the networks permit easy configuration of instruments after installation, using handheld devices. Typical instruments must be calibrated, and often this was done in the field, by hand. Many instruments are installed in remote locations, not easy to reach for calibration. Some networks go further and allow configuration and calibration from the control location.

Because of the self-diagnostics available with smart instruments and networks, it takes fewer people to maintain a system. These, however, must be somewhat better trained people, skilled in electronics in addition to the usual instrument skills.

Finally, there is more useful information available from the new smart instruments and networks. The HART Foundation in particular, is educating plant owners to the fact that they have great information resources going unused in their installed base of HART-compatible instruments. Often, the only time the HART capability is used is during installation, but Helson points out that the HART network can confirm that data are accurate, warn of potential failure before it occurs, and avoid costly downtime due to instrument failure. For example, if a level-control device is shorted, it may still send a signal, but the value is wrong. Using HART communication, the operator could discover the electrical fault and repair the instrument before the inaccurate measurement causes a problem.

The greatest value of the new systems comes with a new installation, because of the savings in installed cost. However, at the time of an expansion, it might be decided to upgrade existing control systems to make them compatible with the new facilities. Hudson conceded that among the major networks there is relatively little difference in cost. Choices therefore are made on other grounds, such as what protocols may already be in use, corporate standards, and preferences among suppliers.

Adams pointed out that several networks may coexist, and often do. For instance, many companies use Ethernet for corporate communications. Ethernet originated with Xerox and Digital Equipment Co., who basically donated it to the public domain. Rockwell Automation for the information level favors Ethernet for communication among plant computers, such as personal computers running scheduling software and collecting production data. The company uses ControlNet™ to connect PLCs and HMI at the control level, and tends to use DeviceNet™ or Foundation Fieldbus at the device level. All three broad levels can communicate with each other as well to accomplish three fundamental functions of control, configuration, and collection.

Siemens offers a slightly different hierarchy in which ASI, a somewhat simpler protocol focused on devices, is used at the device level, linked to Profibus at the intermediate level and to Ethernet at the highest level.

The networks specify a mechanical protocol, such as size and shape of connectors, an electrical protocol (which wires are ground, etc.), and a logical protocol, essentially the language used to send and receive information. Some networks also have the ability to supply power along the bus, while others deliver power separately. In hazardous environments, power may be low voltage to minimize potential sparking; this can create additional challenges to design.

As the HART Foundation points out, almost all modern instruments come with some network protocol built in, whether it is used or not. Most smart process instruments are HART-compatible. A food plant may need to integrate several protocols to accommodate the conveyor-heavy and discrete device–heavy packaging area with the more process-oriented areas of a plant. In this respect, a food plant can require a more challenging control system than much larger process plants in which the nature of information is more uniform.

The food industry has been relatively slow to adopt some of these technologies, according to those experts charged with introducing these technologies to food companies. In part, this is because there have not been  many new food plants built, but it may also be because the industry is only now beginning to appreciate the advantages offered by the various networks. As older plants are replaced or upgraded, the control systems will become smarter and more sophisticated.

Network Protocols
Fieldbus—An open-network protocol originating in the United States and supported by Fieldbus Foundation, to which many major instrument and control firms belong.

Profibus—An open-network protocol originating in Europe but now used internationally. It is supported by Siemens and other control and instrument firms.

HART Communications—An open-network protocol originating as a proprietary protocol with a large instrument firm but now supported by HART Communications Foundation. It is used specifically for continuous-signal analog devices sending signals of 4–20 ma.

DeviceNet—One of several network protocols (others include ControlNet, Data Highway, and Data Highway Plus) developed by Alan-Bradley, now part of Rockwell Automation. DeviceNet and ControlNet have become open systems.