Our sense of taste provides the final analysis of food prior to its ingestion and uptake into the body. We are attracted or repelled by visual and olfactory signals of food but once in the mouth only the gustatory sense tells us to spit or to swallow. Bitter and sour tastes induce aversive reactions, indicating toxicity or harm, whereas sweet and savory tastes usually keep their promise of calorie-and nutrient-rich foods. In addition, olfactory and gustatory inputs are integrated with visual, visceral, mechanical, and even auditory stimuli in the brain to generate complex flavor profiles. Each profile eventually is classified with hedonic values of liking or disliking. 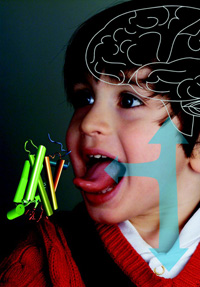 This integration of sensory inputs into long-term food preferences is the major basis of an individual’s food choice. Since food choice determines the quality of diets, it is impossible to disconnect the quality of diets and their consequences to health from the processes of taste. Taste and health are uniquely chained together.

Unfortunately, our scientific understanding of food ingestion is unable to predict the metabolic consequences of flavor and texture perception, such as caloric uptake, gut function, and nutritional status. Moreover, in the modern world, food choice often is disconnected from the need to survive and is dominated instead by the pursuit of pleasure. Despite growing public sentiment that pleasure-driven food uptake is linked to obesity, to date no scientific evidence supports this idea. On the contrary, recent investigations indicate that the sense of taste is very dynamic and responsive to changes in metabolic state.

With a number of discoveries on the molecular physiology of tasting, various questions can now be addressed experimentally: Why and how do we like what we like? By which mechanisms are appetite and the appeal of foods linked to desirable or nondesirable nutritional and health effects? New breakthroughs in the fundamental research on taste sensation are making it possible to understand how taste and metabolism connect.

Tasting Generates a Biochemical Profile
Traditionally, gustation is categorized by five modalities which have only recently been defined on the molecular level by different families of taste receptors. They are sour, salty, bitter, sweet, and umami (savory). This seemingly narrow range of strict classification might blur in the future, but it is clear that the involved sensory systems are capable of probing intricate foodborne parameters critical to the general metabolic homeostasis of our bodies.

The oral cavity is lined with taste-sensitive areas—fungiform, vallate, and foliate papillae and a region known as Geschmackstreifen. In these areas are found taste buds, small assemblies of about 100 cells arranged in a characteristic way around a taste pore that opens to the surface. The molecular entry points for all taste stimuli are specific taste receptors integral to the apical cytoplasmic membrane of taste cells in the taste bud with access to the pore.

Within the past few years, various taste receptors have been identified, and a picture is emerging of the initial molecular events in gustation. In general, all taste receptors bind specific ligands which initiate an intracellular signal transduction cascade leading to neurotransmitter release on the basolateral side of the cell. Following neurotransmitter release, the facial, glossopharyngeal, and vagal nerves transmit taste-specific information to the brain.

So far, all taste receptors are either ion-channels or G-protein-coupled receptors, GPCRs (Lindemann, 2001). Ion-channels transmit their substrate across the taste-cell membrane and directly alter the ion equilibrium across the membrane, leading to neurotransmitter release (le Coutre and Kaback, 2001). In contrast, GPCRs are switches in the membrane. They receive a signal (ligand) on the outside and transduce binding information to the inside of the cell, where a specific chemical signal transduction chain is employed to generate neurotransmitter release. The foodborne ligands generating specific taste sensations feature distinct biochemical properties. In each case, a direct metabolic consequence is linked to the information sensed by these receptors.

• Sour Taste. Unripe and/or rotten fruits and fermented biomaterials usually deliver a strong sour taste, warning the consumer of their critical condition. Likely candidates for the molecular basis of sour taste transduction are the acid-sensing ion channel (ASIC) and HCN, proton-selective pores in the apical microvilli of taste buds (Stevens et al., 2001). Chemically, it is the number of protons—i.e., the pH—which generates a sour taste, although nondissociated protons of weak acids also seem to have an impact on sour taste (Beatty and Cragg, 1935).

• Salty Taste. Our body needs salt (NaCl) for its basic and elementary function. The sodium cation plays a critical role in homeostasis of membrane-dependent ion equilibria, and it is detected as the salty-tasting component of salt. Salty taste is stimulated via the epithelial sodium channel (ENaC), a heterotetramer comprising an αβ2χ subunit stoichiometry.

• Bitter Taste. Recognition of bitter tastants is a warning mechanism to avoid ingesting toxic compounds. However, not all bitter tastants are toxic, and certain bitter qualities are often desired in food. Recently, a family of GPCRs has been discovered with about 25 members in humans in addition to a number of non-functional pseudogenes (Tas2R family) (Adler et al., 2000; Chandrashekar et al., 2000). Specific members of this family (Tas2R4, Tas2R16, Tas2R10) have been identified as receptors for bitter-tasting compounds such as cycloheximide, β-glucopyranosides, and strychnine (Bufe et al., 2002; Chandrashekar et al., 2000). Moreover, natural isoforms of Tas2R5 in mice show different sensitivities to cycloheximide, underlining that there is no strict correlation between bitterness and toxicity. Many—but not all—bitter tastants share hydrophobic molecular features, and most of the Tas2R sequences suggest an amphipathic ligand-binding site.

Chemical prerequisites for a molecule to taste sweet are not uniform. It is interesting, though, that whereas sugars activate a cyclic adenosine monophosphate (cAMP)–dependent signal transduction pathway, it seems that synthetic sweeteners activate the same receptor but that signaling of activation occurs via the inositol 1,4,5-trisphosphate (IP3) cascade.

• Umami Taste. Based on the Japanese word for “delicious,” umami taste in general is the taste of meat and in particular the savory taste of monosodium glutamate (MSG), together with its synergistic enhancer inosine monophosphate (IMP). Umami tasting is based on binding of MSG and IMP to the Tas1R1 and Tas1R3 heterodimer, a molecule that shares the Tas1R3 subunit with the sweet taste receptor (Li et al., 2002; Nelson et al., 2002).

Taken together, by sensing the five classical taste modalities, our sensory apparatus is acting like an analytical chemistry laboratory, making independent measurements of ionic composition, toxicity, and nutritional value. Subsequently, following gustatory processing of these measurements, an integrated, perceived taste profile of the ingested food is generated, leading eventually to a hedonic classification.

Taste Reactions Also Occur in the Gut
An unexpected observation has been made with the discovery of α-gustducin in gut cells (Hofer et al., 1996). Gustducin is an intracellular protein involved in GPCR-dependent gustatory signal transduction. Subsequently, Wu et al. (2002) described gut expression of a set of Tas2R taste receptors linked to sensitivity of an enteroendocrine cell line to selected bitter-tasting compounds. Whereas ion-channel taste receptors are known to be expressed in non-tasting tissues such as brain (ASIC) and kidney (ENaC), this discovery of taste GPCRs and their G-proteins in the gastrointestinal (GI) tract deserves special attention, as they are in direct contact with ingested food.

So far, the role of these taste receptors and their signal-transduction cascades in non-taste tissues has not yet been determined. However, it is clear that they do not directly communicate with the sensory nervous system. Therefore, it is likely that they play a different role in visceral stimulation via the autonomic nervous system.

A picture is emerging in which different detailed and primarily independent “measurements” of ingested food are being made by similar receptor systems, one in the mouth and others in the GI tract. Thus, whereas the oral, sensory-linked receptor system is the gatekeeper for food uptake into the digestive system, the intestinal receptor system might be involved with molecular uptake into the body and the blood.

Why do we have more than one sensing system, and how do they interact with each other? It is proposed that one receptor system primes the subsequent compartment in the GI tract for nutrients to come, and—vice versa—that downstream events in the gut have a receptor-dependent feedback on early events of digestion (e.g., gastric emptying).

Moreover, as both systems do the same chemical work, it is logical to anticipate that they are regulated on a cellular level to be coordinated into a complex metabolic web. Indeed, it has been demonstrated recently in rodents that a diet low in sodium leads to increased expression of ENaC channels on the tongue. Remarkably, in this metabolic state, the threshold for salt taste also seems to be lowered (Broillet, 2003). A molecular link between fundamental metabolic parameters such as ion equilibria, caloric value, and toxicity on one hand and taste intensity and dynamic perception of taste on the other hand provides a unique view on our alimentary habits. Ongoing experimental research will give us the opportunity to understand in molecular detail the mechanisms of liking and, more important, why we sometimes choose diets that are not optimal.

Designing Taste Systems to Satisfy Metabolic Needs
Much like Pavlov’s dogs, we classify a specific taste experience based on the context in which it was presented first. In addition, various studies show that complex flavor learning beyond aversion of bitter and liking of sweet occurs in infancy and early childhood (Johnson, 2002; Mennella et al., 2001; Schaal et al., 2000). Everybody is familiar with foods that remind us of certain childhood events and we equally all have defined taste aversions which take root in our early days. However, it is possible that these context-dependent classifications depend not only on environmental factors present during ingestion but also on direct internal and visceral effects such as gut comfort/discomfort or nutritional benefits and well-being.

In other words, if a specific food generates a malaise, it might do so in the GI tract, with the involvement of taste receptors expressed there. Via a learning event generated by the malaise, it will be taste receptors in the oral cavity which prevent this kind of malaise at future exposure to such food. Trivial as it sounds, these mechanisms could be at work not only in aversive cases but also upon ingestion of healthful foods.

Different people need different foods, and they also have different tastes. Individuality is based on a repertoire of specific genes reflected by the number, kind, and ligand specificities of taste receptors and the coupled signal transduction molecules. The set of proteins expressed comes hand-in-hand with personalized nutritional needs and dictates a pattern of liking/disliking to the perceptive centers in the brain. A proposed individualized repertoire of specific taste systems reflects the need for individualized nutrition. Moreover, highly dynamic expression patterns and regulation of taste receptors to adapt for physiological states such as hunger or satiety would provide the opportunity to design taste systems to satisfy metabolic needs.

A variety of efforts focus on enhancing specific taste parameters in food, and understanding the molecular basics of tasting plays an important role in such development. Personalized and healthy food that connects specific metabolic needs with individual taste preferences is certainly a goal for innovations to come. The near future will bring salt and umami taste enhancers and bitterness inhibitors discovered with the help of molecular biology in the framework of receptor-based assay platforms. The crucial issue is not these molecules per se but the link between the enhanced, specific taste experience and metabolically related nutritional and health benefits. With consequent investigation of the molecular foundation for tasting, liking, and health, this link can be established.

The author thanks Bruce German of the University of California at Davis for critical reading of the manuscript.