An irradiation facility capable of pasteurizing up to 60 million lb of fresh meat and poultry per year is being installed at CFC Logistics in Quakertown, Pa. Martin Stein (phone 973-398-3331), President & CEO of Gray*Star, Inc., Mt. Arlington, N.J., said that its Genesis system is a revolutionary Category III irradiation facility designed to be smaller, less expensive, and easier to install and license than the current large facilities used for medical devices and some foods. 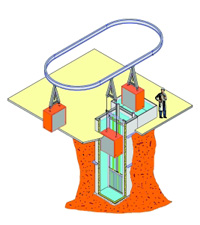 Irradiation is a long-studied and reliable technique for treating a variety of foods with various effects. At low doses, below 1 kiloGray (kGy), potatoes are inhibited from sprouting, insects in grain are kept from reproducing, fruit is delayed in ripening, and mold on fruit is destroyed. At larger doses, 1–10 kGy, pathogens on poultry or meat are destroyed. And at the highest doses allowed, 10 kGy and above, spices and dehydrated vegetables are sterilized.

Three sources of radiation are approved: cobalt-60, electron beams, and x-rays. Cesium-137 is another potential source but is currently used for research, not production. Radioactive isotopes (cobalt-60 and cesium-137) and x-rays produce energy in the form of photons, while electron beams generate a beam of electrons. X-rays are created by first generating an electron beam and then directing it at a metal target from which penetrating photons are produced. The gamma rays from isotopes and the beams from an x-ray have different energies, but function the same way.

Radiation doses are measured ultimately by sensitive calorimetry, i.e., measuring the temperature rise due to exposure for a given time. A Gray is defined as 1 Joule/kg, and 1 kGy is about 0.4 BTU/lb. At the typical doses used for food pasteurization, the temperature rise is about 1 degree. In practice, doses are measured by specially treated polymers which undergo a color change in proportion to the dose received and which trace their calibration back to calorimetry.

Early research on irradiation of foods focused on sterilization for such applications as feeding astronauts in space and the military, but sterilizing doses can cause off-flavors in some foods. The process is still used for these special applications, but the large, civilian applications are for foods that are refrigerated or frozen and are pasteurized with lower doses than are required for shelf-stability.

The categories of irradiators refer to how the isotope source is stored and shielded. Category I is for small sources used in research. Category II uses air storage and air irradiation and is not used for food. Category III uses water shielding and irradiates under water. Category IV stores a source under water but moves it into air to expose a target. Typically, when a source is in air, it must have concrete shielding to protect surroundings from the radiation.

Because of the potential hazard to workers, special training is required for using any radiation device, whether it be for medical use, as in treating cancer, irradiating medical devices, or irradiating food.

Stein says that Genesis, with its scheme of keeping the source under 20 ft of water, requires less shielding and is less complex. Products to be treated are loaded automatically into “bells” which use compressed air to displace water and are lowered through the water pool to a position next to the source. The source is also in air under the water, separated by a thin steel panel which does not reduce the amount of radiation.

The Genesis system occupies only 1,200 ft2 and can be built in about six months for about $1.25 million. Another $1.5 million is required for the initial load of cobalt-60. An owner of a Genesis unit obtains the source from firms that specialize in that business, such as MDS Nordion, a Canadian firm that specializes in technologies for nuclear medicine and irradiation, or Reviss, a British firm. A significant operating cost of isotope irradiation is replacement of the cobalt-60, which decays at the rate of about 1% per month. To compensate for the decay, some fresh sources are typically added every year. Eventually, depleted sources are returned to the supplier and new ones installed.

The shielding water in irradiators must be kept very clean to avoid any corrosion of critical components and to enhance visibility, as operations such as replacing sources must be conducted remotely through the water.

Food Technology Services, Inc., Mulberry, Fla., was the first commercial food irradiator and has been treating fruits and vegetables for a number of years, according to Richard Hunter (phone 863-425-0039), President & CEO. The firm was founded in anticipation of the loss of methyl bromide as a disinfestation agent for fruits. This still has not occurred, but the firm has kept busy irradiating fresh and frozen fruits, vegetables, and meats. A petition to allow irradiation of ready-to-eat foods is pending before the Food and Drug Administration. The company uses a cobalt-60 irradiator provided by MDS Nordion, Ottawa, Ontario, Canada.

MDS Nordion has provided equipment and isotopes for more than 50 years, according to Carolin Vandenberg, Director of Marketing, and Joseph Borsa (phone 613-592-2790), Senior Product Manager. The company has built more than 100 facilities around the world, mostly for medical sterilization applications. The cobalt-60 sources are manufactured by exposing cobalt-59 rods in a nuclear reactor, where some of the atoms acquire an extra neutron to become the radioactive element cobalt-60. The cobalt-60 is then doubly encapsulated in stainless steel.

MDS Nordion also generates other isotopes for diagnostic and treatment applications, some of which are so short-lived that they are made to order and delivered by courier. The company operates two reactors in cooperation with the Canadian government for diagnostic and treatment isotopes. Cobalt-60 is produced in power reactors, where the cobalt-59 serves to absorb neutrons while producing the valuable cobalt-60.

The company offers the Centurion irradiator, which uses Cobalt-60 and is designed for food processing, and the Palletron, which uses x-rays for full pallets of food. Vandenberg and Borsa pointed out that there are advantages and disadvantages to each source of radiation. Gamma rays are emitted in all directions and are generally limited to targets about 2 ft thick. This means that some energy can be wasted, depending on the design and the density of the targets. Typically, pallets of food in cartons are reconfigured automatically before passing through any irradiator, to assure uniform exposure without overexposure of the outer surface.

Gamma rays can penetrate any product, but are affected by product density. They penetrate farther than do electron beams and about the same as x-rays. X-rays can be focused because they are generated in a beam, so while there is some energy inefficiency, typical pallets can be treated without reconfiguration. Electron beams have low penetration depth and so can only be used for thin targets, no more than about 3.6 in thick, exposed from two sides. Typical electron-beam treatments are for single layers of packaged hamburger patties or for packaging material.

Both electron beams and x-rays have the advantage of being turned on and off by a switch, if necessary, according to Mark Stephenson (phone 858-795-6300), Vice President of Public Relations for SureBeam, Inc. of San Diego, Calif. SureBeam was spun off from Titan Corp., a diversified company, to commercialize its electron-beam and x-ray technology for food irradiation. SureBeam’s approach is to build and operate service centers treating foods for supermarket chains and processors.

Packaged ground beef is a typical application, but the company also expects to treat poultry, fruits, and vegetables later this year. Electron beams are best with regularly shaped targets, while xrays are better with thicker and irregular targets. SureBeam has service centers in Los Angeles, Chicago, and Sioux City and a research unit at Texas A&M University. An x-ray machine in Hawaii is used to treat papaya to prevent transmission of plant disease vectors to the mainland.

The suppliers of food irradiation equipment and services compete with one another, though costs of treatment are roughly equal, depending on utilization, energy costs (for those driven by electricity), and other costs. Most also cooperate through the Food Irradiation Processing Alliance (FIPA) based in Washington, D.C., to educate regulators, the public, and the industry.

All foods pasteurized by irradiation carry the radura, an international symbol alerting the consumer that the food has been treated by irradiation. There has always been concern, heightened by the positions of some activists, that the public would resist buying irradiated foods. In fact, such foods have been successful when offered in the market. Efforts to generate protests and boycotts have failed, even in the home territory of some of the organizations opposed to irradiation.

Irradiation is safe for the users and consumers and is a valuable tool in the collection of techniques used to offer safe and nutritious food to the market. All irradiators operate under their own Hazard Analysis and Critical Control Point plan, in which dose, exposure time, and temperature are controlled. Given the demonstrated hazards of emerging pathogens such as Listeria, Escherichia coli, and Salmonella and the ability of irradiation to eliminate them, it is likely that the radura will become a trusted symbol of safety on many packaged foods.