Sanitation is an important part of safe operation for a food plant. The term may refer to cleaning as well as sanitizing or disinfection. There have been some interesting developments in the area recently. 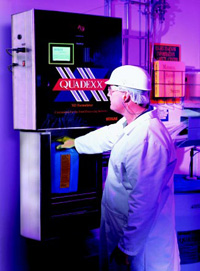 Sanitizing
Microbes on food or food contact surfaces can be reduced by removal, killed by heat, or killed by chemicals. Typical chemicals are oxidizers such as chlorine compounds, ozone, and peroxyacids. Chemical sanitizers must meet specific criteria. They must be non-toxic at the levels likely to encounter indirect food contact. In concentrated form, they are potential hazards to those mixing or handling them.

Oxidizing chemicals can react with organic materials, such as soils, reducing their effectiveness against target microorganisms. Some chemicals may contribute undesirable flavors or odors to foods, if used improperly. Cleaning and sanitizing depends on having adequate time, temperature, and complete contact. Crevices within which microbes and dirt can hide prevent complete cleaning of surfaces, such as those of cutting boards, unless special provisions are taken, such as scrubbing or immersion. Cleaning chemicals are often compounded with detergents and foaming agents to enhance spreading on surfaces and encourage retention.

A challenge to sanitation is the development of resistance by some organisms to some sanitizers, especially the quaternary ammonia compounds. Those sanitizers that kill and then rapidly disappear (oxidizers) seem to create less opportunity for resistance to develop.

Sanitation Standard Operating Procedures (SSOP)
Written Sanitation Standard Operating Procedures (SSOP) are mandated by Federal regulation wherever Hazard Analysis Critical Control Point (HACCP) plans are required. Currently, seafood, juices, and most meat and poultry plants must have HACCP plans, and soon the entire food industry will have them as well. This means that all these plants need SSOPs as well.

An SSOP documents the chemicals, concentrations, application methods and timing for every part of the plant. Enclosed vessels and piping systems may be cleaned in place (CIP) under automatic control, while other types of equipment require cleaning out of place (COP), which typically means careful washing by hand. External surfaces are typically cleaned with portable spray equipment.

Because soils, equipment design, and specific microbial flora vary from plant to plant and among industry segments, preparing a cleaning and sanitation plan, choosing chemicals, and writing SSOPs may require outside expert assistance. Ecolab Inc., St. Paul, Minn. (phone 800-392-3392) is one source for such assistance, according to Jeff Tolke, Senior Marketing Manager for the Food Processing Business Unit.

Ecolab has several proprietary chemicals based on peroxyacetic acid, including Tsunami 100, Tsunami 200, Vortexx, Inspexx 100, and Inspexx 200. Tsunami products are intended for microbial control in flumes and wash water, where fruits and vegetables are directly contacted. Vortexx is aimed at yeasts, molds and bacteria on equipment surfaces in beverage, food, meat and poultry processing. The Inspexx chemicals are intended for food surface treatment in poultry and meat processing.

The peroxyacetic acid compounds break down to acetic acid, octanoic acid, and water, and are used at such low concentrations that there is no residual vinegar flavor. The Quadexx system is a computer-controlled formulation and dispensing apparatus. The Web-based technology keeps track of amounts used, helps prevent over or under use, and can inform management that cleaning procedures are in fact being followed.

Ozone
Two companies are promoting the use of ozone as a sanitizer for food contact surfaces and direct food rinsing. DEL Industries, San Luis Obispo, Calif. (phone 800-676-1335) and Novazone, Livermore, Calif. (phone 877-668-0303) both exhibited at the 2003 IFT Food Expo and both offer ozone generators. Allen Clawson, Director of Corporate Technology for DEL, explained that ozone is a strong oxidizer but since it is applied at much lower doses than chlorine is not as aggressive as chlorine in causing corrosion. In testing of DEL surface sanitation equipment done by NSF, ozone has been found to be equivalent in antimicrobial kill rates to 200 times the concentration of Cl. DEL is emphasizing surface sanitation with its packaged, portable wash systems. Extensive testing and installed plants for produce washing applications have had very favorable results (with one possible exception being mushroom washing).

Marc Scanlon, Central Regional Account Manager for Novazone explained that the firms differ in both how they generate ozone and how it is applied. Novazone uses thermoelectric cooling in its generator rather than air or water cooling. DEL uses a built-in oxygen concentrator, while Novazone uses air or oxygen concentration. Novazone claims it generates less nitric acid, a potential by-product that can cause corrosion in the generator, by carefully tuning the frequency of its generator.

Any ozone system uses electricity to generate the feed gas and the ozone. The ozone is used as a gas or is contacted with water for application. Care must be taken to ventilate the equipment properly as released ozone can be irritating to workers. DEL’s packaged systems address this internally and do not release ozone gas. There is neither harmful residue nor contaminating flavor. Another application is to release gaseous ozone in cold storage rooms to control molds and eliminate ethylene, which stored produce releases, and which can accelerate ripening in fruits and vegetables.

Electrolyzed Water
Dan Lynch, Product Sales Manager for the ROX Water Electrolyzer, Hoshizaki America, Inc., Peachtree City, Ga. (phone 800-438-6087), is promoting application of this patented device which generates an alkaline sodium hydroxide solution and an acidic hypochlorous solution by electrolyzing salt in water and separating the solutions through a membrane. The acidic hypochlorous solution is at least 80 times more effective as a sanitizer than the same parts per million hypochlorite ion found in bleach. The concept is to generate on demand, ready-to-use, cleaning and sanitizing solutions. The Ministry of Health and Welfare Japan approved “Hypochlorous Acid Water” that is created by electrolyzed salt water, as a food additive. Electrolyzed Water continues to gain acceptance in the U.S.

CIP and Washing Equipment
SaniMatic of Madison, Wis. (phone 800-356-3300) makes many types of cleaning and sanitizing equipment, especially multi-tank CIP systems, COP systems, and tunnel washers, according to Andy Campos, Sales Director. The company offers the only full line of such equipment. About 30% of its sales are to the pharmaceutical industry, and the balance to food, especially dairy. One unique feature is an eductor-driven system for once-through chemical use, which eliminates need for a return pump and makes a good starter system for firms replacing manual cleaning with automation.

Color-Coded Equipment
One of the chronic issues in a food plant is preventing cross-contamination by the misuse of tools, such as brushes, shovels, and containers. Remco Products, of Zionsville, Ind. (phone 317-876-9856) offers a clever solution, according to Steve Hawhee, Marketing Manager. Remco makes shovels, tubs, brushes, scrapers and handles from various plastics, such as polypropylene and polyethylene, which can be ordered in any of several colors (green, blue, red, white and gold). Plants establish their own code dictating which color tool is used for which purpose. For example, some confectionery companies use red for chocolate and gold for peanut butter, trying to prevent contamination by an allergen.

In other plants, one color may be restricted to edible material while another is used for inedible waste. Normally, one color is reserved for use on floors, but not for food. The concept is simple, but powerful. Too often, tools are used without much thought to where else they have been and how they may have been contaminated.

Antimicrobial Coating for Steel
A novel approach to sanitizing surfaces is to coat them with an antimicrobial substance. Alan McCoy, Vice President Public Affairs for AK Steel, Middletown, Ohio (phone 866-571-6351), described the coating offered by subsidiary AK Coatings, which contains an inorganic antimicrobial compound called AgION, a zeolite containing silver ions. The zeolite is suspended in an epoxy coating. The coating is applied to sheet steel on a coil coating line, which can coat miles of steel at a time. The coating is cured, and then the coil is slit and cut to produce standard size steel blanks. These blanks or sheets are used by AK Coatings customers to fabricate such products as insulated panels, food service equipment, air handling systems and ductwork.

The initial applications are in hospitals and clean rooms, but there is great potential in food plants. AK Coatings has demonstrated that the compound does curb microbe growth. Ceilings are good candidates where condensation might occur, as in meat plants. Drip pans under cooling units have been notorious sources of potential microbial contamination.

The zeolite coating has the added benefit on stainless steel of reducing the impact of fingerprints.

A humble but effective application for the coated thin sheet is push plates on rest room doors, spots that often become contaminated and may not be routinely included in cleaning and sanitation.

Methods Only as Good as the Human Who Uses Them
Cleaning and sanitation may rely on some sophisticated chemistry, but they are only as good as the humans who execute the procedures. Specially coated steel takes some of the human element away, but food contact surfaces will still need to be cleaned, often by a person with a hose and a brush. Protection of the worker as well as the consumer is critical, especially with chemicals which can be toxic. An additional complication is the sad fact that sanitation is often a low-paid position relegated to the late shift, with little supervision. Tools that document usage and control formulas help compensate for what may be low skill levels.