Ozone (O3) is a relatively unstable and very reactive compound formed by the action of electricity on oxygen. It is familiar as the source of the distinctive odor associated with thunderstorms, where it is formed by lightning strikes. It is also formed in the atmosphere by the action of chemical pollutants impacted by ultraviolet radiation from the sun. Because it is toxic, it is used as an indicator of air quality. Higher up in the atmosphere, it helps to shield life on earth from excessive ultraviolet radiation by absorbing much of the radiation before it can do damage to us. 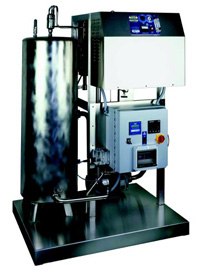 Ozone is approved as a sanitizer for contact with food and food equipment because it is effective against many microbes and leaves no residue after it reacts and decomposes. Unlike another strong oxidizer, chlorine, ozone does not react with organic materials to produce undesirable compounds and does not leave an unpleasant taste. Thus, ozone has begun to replace chlorine in treating drinking water, processing water for reuse, and wastewater (after treatment) before discharge. Most bottled water is treated with ozone, again because it is effective while not affecting taste.

A number of researchers continue to explore applications of ozone in treating foods. While it often is effective, it is not suited to every potential application.

Larry Beuchat, Professor of Food Science at the University of Georgia, Griffin (phone 770-412-4740), has tested ozone in a number of applications, including treating seeds before sprouting and treating the surface of cured meat. With meat, he found that too much ozone caused the meat to turn pale in color. Against Listeria, ozone was not much more effective than other sanitizers. In treating seeds, it takes high concentrations of sanitizers to eliminate pathogens because the organisms appear to gain protection from the relatively porous seed coat.

Michael Doyle (phone 770-228-7284), Beuchat’s colleague at the university tried to prevent the spread of Escherichia coli O157:H7 among cattle by treating their drinking water with various sanitizers, including ozone. Unfortunately, the high concentration of organic material in the water, due to undigested feed from the somewhat sloppy animals, consumed the oxidizers before they could affect the microbes.

This illustrates a common problem with oxidizing sanitizers such as ozone— they are indiscriminate in their attack and so can be consumed by extraneous organic material.

Efficient Ozone Generation
Brian Johnson, President of Pacific Ozone Technology, Benicia, Calif. (phone 707-747-9600), discussed the many applications for his firm’s ozone generators and contactors. Ozone is used in aquaculture to disinfect water and assist in filtration; in cooling-tower water to reduce fouling; in bottled water, as mentioned above; and in many areas of food processing.

In poultry processing, for example, as Johnson points out, ozone is used to purify the drinking water for chickens, to reduce airborne disease in chicken houses, to disinfect the chill water in a slaughter plant, and to disinfect the slicing equipment.

Often, it is necessary to combine other treatments, such as cleaning, with ozone to remove competing organic material.

Pacific Ozone Technology tailors its equipment to the application. Thus, the company offers units that concentrate oxygen from air using pressure swing absorption (PSA), some that use air directly, and others that feed pure oxygen from another source. The most common is PSA, because the feed gas must be dried anyway (to prevent formation of undesirable by-products in the electrochemical reaction forming ozone) and the drying process is essentially the same as the concentration process. In aquaculture, where densities of fish or shrimp may be very high, pure oxygen may be available anyway, because it is used to keep the fish or shrimp alive, and so can be used to generate ozone. Finally, in salt water aquaria, it is desirable to preserve clarity by minimizing formation of small bubbles, so making ozone from air is preferred.

Pacific Ozone Technology supplies equipment to BOC Gases, Murray Hill, N.J., which makes contacting systems in which ozone is dissolved in water for subsequent use as a sanitizing agent. Mike DiMaggio, Business Manager, Food Safety Markets at BOC (phone 908-771-1674), says that its system generates 4 ppm of ozone in 10 gal/min of water and often is used in a recirculating system, where the ozonated water is available at multiple stations.

Pretreatment of Potatoes
O3Co., a small firm in Aberdeen, Idaho, has studied the use of ozone to deactivate pathogens on potatoes. Currently, potatoes are not usually treated before storage and so may suffer deterioration due to pink rot, soft rot, and silver scurf.

According to Lynn Johnson, President (phone 208-397-3033), O3Co. has shown that high concentrations of gaseous ozone applied as the potatoes are conveyed to storage can reduce the incidence of the pathogens. The ozone is applied in a covered conveyor.

The Idaho National Engineering and Environmental Laboratory (INEEL), Idaho Falls, and O3Co. have broadened the target to include microbes that might be used as bioterrorism agents, infecting food to cause harm to humans, according to Alan Snyder, Senior Advisory Engineer at INEEL (phone 208-526-1725). Relatively little is known about ozone in such applications. After the anthrax attacks of 2001, office buildings and postal equipment were disinfected using high doses of chlorine dioxide, which caused extensive damage. The hope is that ozone might be less damaging in such recovery events.

Eggs and Apple Juice
Ahmed Yousef, Professor of Food Science at Ohio State University (phone 614-292-7814), has helped develop an interesting process to reduce Salmonella in shell eggs, but he expresses alarm over misuse of ozone to treat fruit juices. Shell eggs can be pasteurized by a mild heat treatment (58oC for 40 min). The eggs are not cooked, but do show turbidity in the whites. When heated at a ower temperature for about half the time and then exposed to gaseous ozone under pressure, the eggs show more than 6 log reduction in inoculated Salmonella with less turbidity. It is believed that the heat treatment improves the permeability of the shell to ozone and that the ozone then reacts with the microbes. It may be that the lethal action of ozone is from free radicals made by interaction with other materials or with the microbes themselves, as well as the reactive oxygen radical released by ozone as it decomposes.

Yousef is concerned that some producers of apple juice are bubbling ozone through the juice as a substitute for heat pasteurization. He feels that the quality of the juice is impaired and that pathogens are not reduced sufficiently because the ozone reacts with the juice rather than with the pathogens. Because of some incidents of E. coli O157:H7 transmitted by fresh fruit juices, the Food and Drug Administration requires that juices be treated to have a 5-log reduction in target pathogens. The most common treatment is to use heat, but since this affects the flavor, there is great interest in other options. High hydrostatic pressure, pulsed electric fields, irradiation, and, in the case of citrus, careful surface cleaning of tree-picked fruit are candidate treatments. FDA has not yet said whether it approves of ozonation for this purpose.

A key lesson from Yousef ’s work and that of others is that ozone reacts differently with various materials. For example, phenolics and flavor compounds in juice concentrates are very reactive, which means that ozone may not be very effective in pasteurizing such materials. On the other hand, egg albumin and high-fructose corn syrup (HFCS) are less reactive, which helps explain why the egg process works.

Ozone Information Available
The International Ozone Association–Pan American Group, based in Phoenix, Ariz., is a nonprofit organization which serves as the “authoritative source of information about ozone production, measurement, application, and control and its respective advantages and synergies with other oxidation and disinfection technologies.” It publishes a bimonthly newsletter, a bimonthy scientific journal, and other information that members might find useful. The Chair of the association is Paul Overbeck (phone 623-587-8858).