Controlling crystallization is one of the most critical objectives of most confectionery processes. It is an interesting and baffling phenomenon, influenced by many factors which are not well understood. Confections, of course, are immensely varied and popular foods, usually based on one or more sweeteners and often incorporating chocolate or cocoa as well. The processes and equipment used have evolved over the years, mostly in an empirical fashion.

Richard Hartel, Professor of Food Science at the University of Wisconsin, Madison (phone 608-263-1965) received the Institute of Food Technologists’ 2004 Research & Development Award for his career-long contributions to understanding both sugar-based and chocolate confectionery processes. Part of his research has focused on prediction of whether crystallization will occur in a specific system and, if so, at what rate. To understand these issues, it is helpful to review briefly how some familiar candies are made.

Candy Making in Brief
Sugar-based candies are classified as high boiled or low boiled, depending on the amount of residual moisture. Hard candies are glasses—amorphous, noncrystalline—while softer candies may have fine crystals. It should be noted that while sucrose is the most common sweetener, other carbohydrates such as sugar alcohols and various oligosaccharides may be substituted to reduce certain properties of sucrose. Substitute sweeteners may have fewer calories, be less cariogenic (cavity inducing in teeth), or be less glycemic (harmful to diabetics) than sucrose. These substitutes often are more expensive than sucrose, may require modifications to processes to achieve the same or similar final results, and do not always taste the same as sucrose. For example, some sugar alcohols have a cooling effect in the mouth, while other substitutes have a warming sensation. The combination of two sweeteners may more closely approximate the taste of sucrose than either alone.

When sucrose is used, it generally is combined with glucose or dextrose from corn syrup. The glucose helps inhibit crystallization of sucrose. In addition, flavors and acids are often added to candies. The acids may catalyze inversion of sucrose to its constituents, glucose and fructose. Invert sugar can be more sticky than sucrose and glucose in the glasses that are hard candies.

After the desired amounts of sucrose, glucose, and water are measured, the mixture is cooked to dissolve the solids and evaporate some of the water. At low moisture contents, it is challenging to measure solids concentration accurately, so boiling point is used as an indication of concentration. Thus, many processes require that a mixture be cooked to a given temperature. High temperatures accelerate inversion and color formation, so some candies are cooked under vacuum or quickly discharged from atmospheric cookers into a vacuum chamber for cooling.

For some products, such as toffee and caramel, color formation is desired, so milk proteins are often added to react with reducing sugars, such as glucose, to form new flavors and dark colors. Fats may be added to help make a cooled candy soft and to contribute to flavor and mouthfeel.

Because some added flavors are volatile, they may be added after a molten candy mass has cooled somewhat. This can become a challenging mixing problem, because the candy mass is very viscous. If the mass has the correct moisture content and is deliberately agitated and aerated by pulling, many very small crystals can form, resulting in an opaque and chewy taffy. With lower moisture content and very rapid cooling, the result is a clear glass. While it is warm, the glass can be folded to incorporate flavors, acids, and colors and then formed into pieces by stamping in molds or cutting from a correctly sized rope.

Crystallization
Part of Hartel’s research has been directed at understanding the complex phase behavior of these systems. He has found that the ratio of sugar to water and the ratio of sucrose to inhibitor (glucose) help to define three regions of crystallization: one where there is never any crystallization, one where crystallization is immediate, and one where crystallization may be slow or fast. He and his students are struggling with the best way to portray this complex behavior, but their insights already have helped in troubleshooting by candy manufacturers. They use a state-diagram approach where possible (in hard candy and fondant), but they have not yet been able to adequately define the phase boundaries for the more-complex candies such as jellies and caramels.

Among the defects in candies is crystallization when it is not desired. For example, if all the sucrose crystals are not dissolved in a candy glass, they can serve to nucleate crystal formation, weakening the candy piece structure. If the surface of a glass gets wet, the lower viscosity may make surface crystallization possible. Hartel’s group is studying moisture migration through one-dimensional sugar glasses under a microscope, using a very small near-infrared (NIR) probe to follow the moisture wave (Fig.1). 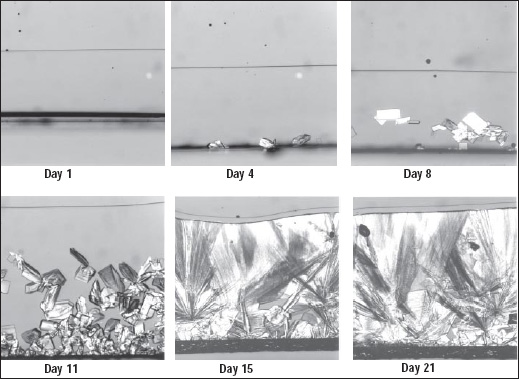 Chocolate Processing
Chocolate is made from cocoa beans, which are grown in several tropical countries. After harvesting, the beans are fermented by allowing them to lie in the sun while a surface mucilage dries. There are many process variations among manufacturers, including roasting before or after removal of shells, alkali treatment or not, and other choices. The degree of roasting can also vary. In general, the dry beans have their shells removed, after which the nibs (the soft inner contents) are roasted, ground, and then filtered.

Grinding is very important to the mouthfeel of the eventual chocolate and is often done on multi-roll refiners. The fine grinding makes subsequent filtration difficult, so the filtration is done with high-pressure presses. The resulting liquid is cocoa butter, and the solids are cocoa powder. The slurry before filtration is chocolate liquor.

Cocoa butter is unique among fats because it has a relatively sharp melting point, quite close to normal human body temperature. However, it also has a complex polymorphism, meaning that its solid form can take several crystal forms, only one of which is stable. To ensure that products containing cocoa butter maintain a stable state after cooling, the molten mass must be kept within a precise temperature range, neither too warm nor too cool.

Chocolate confections are made by combining cocoa butter, cocoa powder, sweeteners, milk powder, and inclusions such as nuts. To meet chocolate standards of identity (set by government regulation) takes more cocoa butter and less cocoa powder than the natural proportions of the cocoa bean, so cocoa powder is a major by-product of chocolate manufacture. Cocoa powder comes in a wide variety of colors, particle sizes, and flavors and is widely used in baking and the manufacture of compound coatings.

Compound coatings are made from cocoa powder, sweeteners, milk powders, and a fat other than cocoa butter. Because the properties of the substitute fat can be manipulated, the resulting mixture may be easier to handle in manufacturing and also less expensive than chocolate.

Enrobed coatings for many baked goods are compound coatings rather than chocolate. The substitute fats may be other relatively hard fats, such as palm oil or coconut, may be fractionated from animal or vegetable fats, or may be hydrogenated vegetable oils. Hydrogenated oils can have high trans-fatty acid contents, which are now considered potentially harmful to people, so their use is likely to be reduced in the future.

One of the defects of chocolate and compound coatings is bloom, a discoloration of the surface. Hartel distinguishes between sugar bloom and fat bloom. Sugar bloom occurs when moisture on the surface of chocolate extracts some sugar and then evaporates, leaving a white deposit. Having the temperature too low on the outlet of a cooling tunnel can cause condensation on the exiting candy, leading to this effect.

Fat bloom was thought to be caused by a polymorphic transition in cocoa butter, but Hartel now believes that such a transition is a result, not the cause. Fat bloom can occur in well-tempered chocolate that has been stored too long (Fig. 2). His group uses a color meter to quantify bloom under different circumstances. Other research groups have used an atomic force microscope (AFM) to quantify the roughening of the surface caused by bloom. 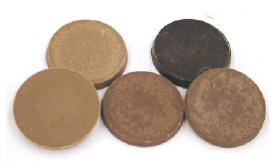 Hartel and his group have recently identified a third form of bloom. When chocolate is solidified without tempering, as might happen when a chocolate bar melts in the car and then resolidifies, the bloom that appears is different from either sugar bloom or fat bloom. They used a differential scanning calorimeter (DSC) to prove that the bloom scraped from the surface of one of these bars is highly concentrated in cocoa solids and sugar crystals, and is almost devoid of fat (Fig.3).

Most people have considered this type of bloom to be identical to fat bloom caused by temperature cycling during storage and nut oil migration, but it’s clearly a different mechanism (and composition). Storage bloom is all fat, but this bloom on untempered chocolate has essentially no fat. They think it is still related to the polymorphic transition of cocoa butter, but in this case the transition leads to a separation of the particulate matter as the cocoa butter contracts during polymorphic transition.

While Hartel’s group normally follow bloom formation with the Hunter colorimeter, they are working on a new method. They make a well on a microscope slide and pour the tempered chocolate (or a model fat system with a bit of cocoa powder to provide contrast) into the well. One edge is cut flat and left exposed to the air to promote bloom (using a temperature-cycling chamber). An optical microscope looking down along the flat surface allows them to follow the development of fat crystals emanating from the surface. This same technique is used in the cosmetics industry.

Trends in Confectionery Processing
Michael Allured, publisher of The Manufacturing Confectioner, Princeton, Wis. (phone 920-295-6969) identified several trends. One is the effort to maximize health benefits from chocolate by increasing desirable flavonoids using lower-temperature roasting. Another is to use aerated chocolate to lower density without affecting appearance or texture. He also observed that technologies originally developed for pharmaceutical delivery were being applied to confections, such as oral strips—rapidly dissolving pieces of polymeric gums that carry intense flavors—and breath fresheners.

Bob Boutin, Executive Vice President, Knechtel Labs, Skokie, Ill. (phone 847-673-4477) observed the general trend toward greater automation in confectionery manufacturing. Where many processes were traditionally batch, such as cooking and pan coating, now they are more likely to be continuous, primarily to reduce labor. For example, a belt coater can handle 1,000 lb, whereas it would take five conventional pans to process the same amount. Moguls, starch-depositing machines on which are made such products as jelly beans and candy corn, are now 40 inches wide instead of 30. The drying rooms in which starch-deposited candies are cured now have better control of temperature and humidity, increasing uniformity and reducing the time before the candy can be further processed by coating or packaged.