Glucosamine is safe and effective
In their Food, Medicine, & Health column in the August issue of Food Technology, Clemens and Pressman (2004) questioned the safety of glucosamine. We have recently reviewed the safety and efficacy of glucosamine (Anderson et al., 2004) and will briefly summarize some of the safety information here.

As noted by Clemens and Pressman, the major safety concern regarding glucosamine is a theoretical one related to its effects on glucose metabolism. In very high concentrations glucosamine has in-vitro effects on glucose metabolism and insulin action. The in-vitro tests and studies in animals have used doses of glucosamine that achieved blood and tissue levels 100–2,000 times higher than with human usual oral doses (Anderson et al., 2004). To achieve these tissue levels, an adult would need to ingest from 1/3 to 6 lb of glucosamine/day!

Studies in rats, mice, dogs, rabbits, and horses have repeatedly documented the safety of oral glucosamine administration. Oral administration in animals of 200-fold more than the typical human dose of glucosamine was not associated with observed toxicity in these animals. These studies in rats, mice, and dogs have detected no histopathology in liver, pancreas, or other examined tissues and have not revealed any evidence to support the theoretical concern that glucosamine use might be associated with steatosis or nonalcoholic fatty liver disease. After numerous animal and human studies, there is no evidence that orally administered glucosamine is hepatotoxic. Thus, while some adverse effects have been observed when animals were injected with extremely high doses of glucosamine, no adverse effects were noted when large amounts of glucosamine were fed through the diet.

The efficacy of oral glucosamine for osteoarthritis and side effects have been assessed by three meta-analyses (McAlindon et al., 2000; Bruyere et al., 2003; Towheed et al., 2004) and our detailed review (Anderson et al., 2004). We reviewed 32 human clinical trials of 3,073 subjects. Side effects were significantly less common (20–24% lower) with oral glucosamine than with placebo administration. Oral glucosamine significantly decreased symptoms of osteoarthritis without increasing the risk of adverse effects. NSAIDs can have serious side effects, and four trials have compared the effects of glucosamine (231 subjects) to ibuprofen (231 subjects) and noted side effects to be about three-fold higher with ibuprofen. No gastrointestinal bleeding has been reported for 3,073 subjects treated for a total of 979 patient-years with glucosamine, in sharp contrast to effects of ibuprofen and other NSAIDs (Wolfe et al., 1999). Because of the proven efficacy and safety of glucosamine, it should be considered as the initial agent of choice for persons with symptomatic osteoarthritis.

Clemens and Pressman reply
We appreciate the comments by James Anderson, an expert in diabetes and obesity management. We raise the issue that glucosamine may be diabetogenic based on numerous in-vitro studies that demonstrated that this amino monosaccharide can modulate pancreatic cell insulin response to glucose challenges and may contribute to insulin resistance or impaired insulin secretion. Our concern is escalated by the increased prevalence of arthralgia among our obese patients, who frequently seek alternatives to resolve joint pain. In our clinical experience, these pre-diabetic and insulin-resistant individuals are the very patients who often receive our blessings for initiating glucosamine therapy. Thus, we voice caution about introducing a potential risk factor in an apparently increasing number of patients who may already be metabolically compromised.

The April 2004 Institute of Medicine/National Research Council safety monograph on glucosamine (NRC. 2004. Prototype monograph on glucosamine. In “Dietary Supplements: A Framework for Evaluating Safety.” National Academies, Inst. of Medicine, Natl. Res. Council, Washington, D.C.) notes that the impact of long-term glucosamine, especially among pregnant and lactating women, those presenting hepatitis, and children is unknown and that the impact of glucosamine on insulin secretion needs further study at doses relevant to human oral intake. Until these sobering questions are definitively resolved, we would continue to advocate caution in the judicious use of this intriguing agent.

Many foods contain starch, either naturally or due to being added. Among the first-order transitions mentioned in the article, starch gelatinization affects both food quality and, in fluid foods, thermal processing of canned foods. The latter, known as brokenheating phenomenon, slows heating rate of a starch-containing food so that it requires additional heating time. A differential scanning calorimeter detects the gelatinization temperature range. However, starch granules absorb water and swell after gelatinization, resulting in increase in viscosity of a starch dispersion.

Given that starch is used extensively in foods, several research groups, including mine, are studying its gelatinization and its consequences.

Phase transitions article throroughly researched
I enjoyed Dean Duxbury’s review article on phase transitions (August, pp. 78-80). I remember when Louise Slade and Harry Levine first started postulating their theories when we all worked for General Foods in the 1980s. It is remarkable how far-flung have been the application of these ideas since then.

What particularly struck me about his review was how thoroughly he had researched the subject. Many review articles these days are rather sparse on references; it was refreshing to see the depth to which he evidently went in preparing the article. 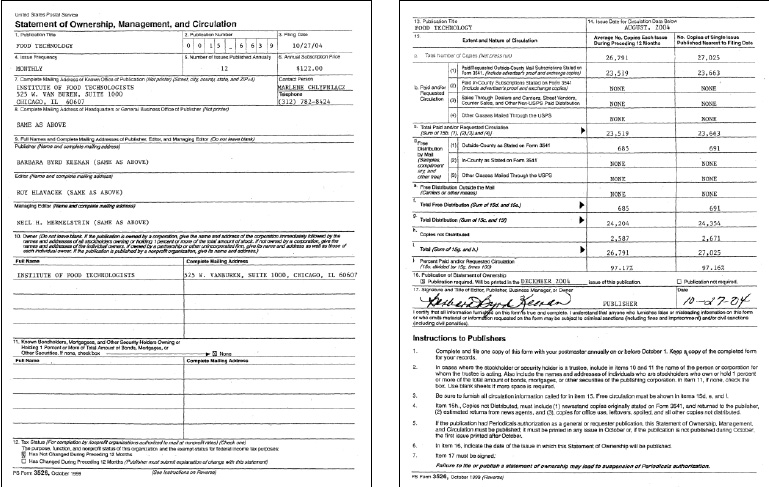 Anderson, J.W., Nicolosi, R.J., and Borzelleca, J. 2004. Glucosamine effects in humans: A review of the effects on glucose metabolism, side effects, safety considerations, and efficacy. Food Chem. Toxicol. Unpublished manuscript. U. of Kentucky, U. of Massachusetts-Lowell, and Virginia Commonwealth University.