Mixing of solids is a widespread and important unit operation in food processing. Some mixes are products themselves, while others are preliminary steps in more complex processes. 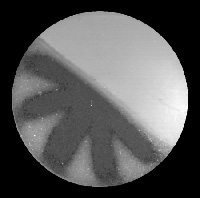 Historically, mixing of solids has been studied empirically because there seemed to be little fundamental understanding. However, this has changed relatively recently, as physicists and engineering researchers have recognized the importance of solids behavior and the intellectual challenge and satisfaction of solving problems in this area. Some time spent reading research papers from these areas can provide significant insight.

In contrast to liquids and gases, granular solids or powders can segregate or become unmixed under a variety of influences. If particles differ in size or density (they often differ in both), almost any motion will cause some difference in individual velocities in the assembly. The result is segregation, having the practical consequence of varying composition, when a uniform mixture is usually desired.

Examples are numerous of food processes where mixtures of powders are important and where non-uniform composition can be a serious defect. For instance, cake mixes contain flour, sugar, cocoa, baking powder, and minor quantities perhaps of salt, shortening, powdered egg, and other materials. Batches may be mixed that weigh thousands of pounds but be packaged in 1-lb units. Consumers expect such a mixture to perform reliably from purchase to purchase.

It is common to mix such materials in ribbon blenders—half-cylinder vessels with a horizontal shaft around which is wound one or two helical bands or ribbons. Sometimes the agitator consists of paddles on short arms attached to the horizontal shaft. In either case, the objective is to cause convective mixing by moving portions of the mixture around the vessel.

It is not always appreciated that many samples must be taken to get a reliable estimate of standard deviation, commonly at least ten. Furthermore, in a multicomponent mixture, one must select which ingredient to use as a tracer and then realize that as its concentration changes, so do all others. For that reason, a minor ingredient is often selected. Salt is useful because it is relatively easy and fast to analyze and is found in many food mixes.

Once a process study has been performed, it is important to control mix times because excessive mixing can promote segregation. Furthermore, unless all subsequent steps are carefully designed, a uniform mix can become segregated just by falling through chutes or filling bins.

Research on Mixing and Segregation
Julio M. Ottino, Professor of Chemical Engineering and Mechanical Engineering at Northwestern University, Evanston, Ill. (phone 847-491-3558) and his colleague Richard M. Lueptow, Professor of Mechanical Engineering at Northwestern, have published extensively on the fundamentals of mixing and segregation of solids. They have provided explanations for peculiar patterns that are observed in some idealized situations. For simplicity, most research in this area is performed with binary mixtures that differ in size or density, but rarely both. For example, identical grains of sand may be dyed two colors. Or same-size spheres of steel and glass may be used.

A common mechanism is a rotating cylinder, which resembles the equipment often used for coating particles or making cement. Sometimes the cylinder is very thin, so it is considered two-dimensional, which permits visualization of the patterns. Ottino has also studied long cylinders in which puzzling alternating stripes of segregated particles can appear. The most common explanation is that the angle of repose of different particles can differ, causing differential velocities along the axis of the tube. However, this is still considered an open issue, as particles with very different angles of repose may not segregate under some conditions. (The angle of repose is the angle that a poured heap of particles forms with a horizontal plane and is a characteristic of a particle.) Under the right conditions, small particles accumulate in the core and then “break through” to the surface, forming bands.

If this were to occur in a process, the output of the rotating cylinder would vary in composition. Ottino and his students, and others publishing in the field, have used theory and experiment to identify some practical consequences. For instance, a non-cylindrical shape, such as an equilateral triangle, may be a better mixer than a cylinder. The degree of fill is a significant variable, with relatively low values performing better. This means that an operator who tries to force larger quantities through a given piece of equipment may be promoting poor mixing.

Rotation speed also matters and usually has an optimum value. At too low a speed, there is inadequate agitation; but at low speeds, avalanching flow can occur, which is efficient in mixing. At too high a speed, centrifugal force sends all the particles to the perimeter. The Froude number is the relevant scaling parameter: Fr = N2D/g where N is rotation speed, D is radius of cylinder (or another characteristic dimension of the equipment), and g is acceleration of gravity, all in consistent units. Fr = 1 defines the beginning of centrifuging, so values considerably less than 1 are needed for mixing (e.g., 0.03).

Another useful finding concerning rotating cylinders is that symmetric baffling makes little difference. Such baffling is common in coating drums. It is better to have just one baffle.

Real mixing situations often involve multiple components, which may differ in size and density. Some may be fragile and subject to breakage. Coatings or other components may be liquids, such as fat or water. Liquids can dramatically change the behavior of solids by forming liquid bridges among particles and changing their cohesiveness. If particles are close in density, reducing size and making all particles similar in size normally improves mixing. However, density and size have opposite effects, so where density may differ, size differences may help to compensate for what otherwise might be a segregating situation.

Cohesiveness refers to the ability of powders to stick together. It can be experienced qualitatively by pressing a small sample between one’s fingers. It can be measured in a shear cell, where a sample is compressed and the force needed to slide the two halves of the cell apart is measured.

Cohesive powders can experience flow problems, because it is easy for them to form bridges, but they are less inclined toward segregation than non-cohesive powders. Thus, in any specific mixing situation, the geometry, the composition of the mixture, and the potential effect of additives must all be considered.

In general, Ottino and Lueptow observe, properties of solids are not studied in industry to the same extent that properties of liquids are. They suggest that relatively simple studies, such as measuring angle of repose, or “mixablility” in a standard device, could be useful to industrial practitioners. One such device they have used is a rotating sphere whose axis can also be oscillated. Depending on the frequency and amplitude of oscillation, segregation may or may not occur in binary mixtures. The thought is that this or another simple system might be used as a standard instrument to study powder mixtures, much as a capillary tube is used to measure viscosity of liquids.

Specific Mixers
Littleford Day of Florence, Ky., offers a variety of mechanical mixers designed to offer vigorous agitation to incorporate high ratios of fats or other hard-to-disperse materials, such as lecithin, according to Bill Barker, Marketing Manager (phone 859-525-7600). The best-known machine is an enclosed cylinder which has plows attached to a horizontal shaft. The plows clear material from the side of the cylinder and circulate it back to the center. In addition, choppers—four-bladed agitators inserted between the plow paths, each with its own drive—disperse clumps that may form from liquid addition.

Littleford mixers are used for encapsulation, adding lecithin to dispersible drink mixes, coating particles, granulation(where particles are deliberately grown in size, usually to make material for tableting), and many other purposes, including evaporation and drying.

The company also offers the Nauta mixer, a much-lower-shear machine in which an auger extends along the edge of a conical vessel and rotates about its own axis while it orbits the vessel. The effect is to gently lift material without causing damage to fragile particles. These machines can be used as mixers or as holding vessels, to reduce or counteract segregation. Ribbon blenders are less expensive than vertical cone screw blenders, of which the Nauta is an example. Ribbon blenders also use less headroom but have a bigger footprint. The vertical cone screw blender uses less power than a ribbon blender and empties more completely.

Charles Ross & Son Co., Hauppauge, N.Y., also offers a variety of mixers, including ribbon blenders, according to Bogard Lagman, Executive Vice President (phone 800-243-7677). However, they are especially known for change-can mixers, in which very viscous materials are mixed with rotating agitators. The mixtures are held in a removable cylindrical vessel which can then be transported to filling or further processing. Examples of materials made in such equipment include cosmetics, thick sauces, and high-solids concentrates.

Mixing has long been considered an art, but thanks to such research as that by Ottino, Lueptow, and others, some of the fundamental mechanisms are becoming better understood. These insights help one to operate available mixing equipment more effectively and, perhaps, to suggest novel designs for the future.