With plastics rapidly assuming a major role over other materials in food packaging, enhancements of polymer technologies will inevitably generate greater influence over the protection of foods and beverages from maker to consumer—and beyond.

Emerging from an initially surprising geographic confluence of Auburn, Ala., and Cambridge, Mass., three-component plastic has quietly caused a true revolution in pharmaceutical and diagnostics packaging. Diabetics are familiar with their daily routine of opening multi-portion packages of blood-glucose test strips to evaluate their blood sugar levels. With the new multi-phase polymer technology from CSP Technologies Auburn, Ala. (phone 334-887-8300, www.csptechnologies.com), a multiplicity of naked hygroscopic blood-glucose test strips may be packaged together in a single container, permitting the patient to open the package, remove one strip, and reclose the package. Within less than one minute, dry conditions are restored to protect the efficacy of the strips. By uniquely blending desiccants into plastic structures, water vapor that might have entered during the transient package opening is removed, and the arid conditions of the original packaging operations are restored.

Consider how such a technology might benefit the product quality retention in packages of low-moisture foods such as instant coffee; beverage, soup and sauce mixes; long-shelf-life confections; cookies; salty snacks; and a host of what food and food packaging technologists and marketers might conjure up in their aggressive imaginations. Or carrying the concept further, placement of active packaging components such as oxygen scavengers, antimicrobial emitters, or odor absorbers in three-phase geometry could achieve what to date has eluded food packaging technologists: the active packaging in the package plastic rather than in an independent entity such as a sachet.

CSP Technologies’ Billy Abrams, VP of Business Development, is located in Auburn, but his scientific support professionals are good old New Englanders: Ihab Hekal, a renowned plastics innovator and inventor of the technology; Alex Klibanov of the Dept. of Chemistry at Massachusetts Institute of Technology; and Robert Langer of MIT’s Dept. of Chemical Engineering. Langer was declared by Time in 2002 as one of “America’s Best: Science and Medicine” for, among other advances, his work on biomedical-compound release from implantable “pharmacy-on-a-chip” responsive to, for example, signals from the patient’s blood chemistry. It is interesting that these singular—and rather extensively patented—mechanisms to deliver active packaging activity to internal package environments have not received the high visibility accorded so many less-technically sound offerings.

How the Three-Phase Technology Works
One key rationale for the new system is that active packaging agents generally cannot be effectively attached to the surfaces of plastics with the expectation that they will self-remove and combine with the contained product. Furthermore, the amount of active packaging agent that might in theory be attached to a flat or curved package surface would be too low to exert any meaningful effect.

If the active agent is blended with the base plastic, it is beneath the plastic surface; i.e., a “barrier” is erected between the active component and the contained product. In such a situation, migration would be required through the plastic—which leads to a time delay in activity and uncontrolled concentration levels. In some instances, of course, controlled migration over time can be beneficial, but in most situations, immediate response to a change in product environment is required to retain quality. Engineering the plastic with the active agent to initiate its function instantly—and subsequently have it continue in a controlled mode—is the objective.

By combining a channeling agent and an active material with the bulk or base polymer, the transport properties of the plastic may be modified. The channeling agent alters the physical characteristics of the base polymer to transmit gases to the active packaging agent, which, for CSP Technologies, began with desiccants and the transmission of moisture.

The three-component channeling plastic consists of a majority polymer, a minor polymer that is immiscible in the major polymer, and a particle (of active compound) that resides in or on the minor polymer. A channel structure opens pathways throughout the plastic that allow the controlled movement of gases into and out of the plastic. The particles or active agents can absorb water vapor, gases, odors, etc.; release aromas, gases, nutrients, etc.; or transmit gases or vapors by modifying the transport properties of the plastic.

Among the typical three-phase formulations employed by CSP Technologies are polyethylene (PE) plus polyethylene oxide (PEO) plus active particles such as silica gel or molecular sieve desiccants. It is believed that the PEO phase wets the active particles, forming a PEO/particle network in a surrounding matrix of PE. Another three-phase structure includes a polypropylene base polymer and a polyethylene glycol channeling agent to create a two-phase network leading from the surface to the entrained (third-phase) particles residing within the channels and thus creating a three-phase network. Two discrete phases containing open passageways alter the transmission characteristics of the overall plastic structure.

Functions of the three-phase system in a packaging context include absorption, adsorption, controlled release, and alteration of transmission characteristics.

• Absorption. Absorption (or adsorption) can include active components entrained in the polymer to create materials with predictable absorption channels. Among the compounds that could be absorbed are water vapor; oxygen; odors, such as sulfur- or amine-based odors or aldehydes from lipid oxidation; carbon dioxide; and ethylene—all of which are involved in contained food or beverage deterioration.

• Controlled Release. The release objective is achieved by utilizing the channel structure. Channels within the polymer matrix permit controlled diffusion of gases or vapors into the matrix; these gases may react with the active component that triggers a release as required. Active components within the polymer matrix may release a desired agent which then diffuses (rather than permeates) through the pathways and into the surrounding environment.

Morphology
The microscopic three-dimensional pattern of the regions of two polymers “blended” with each other is designated the combination’s morphology. The properties of the final product are influenced by whether one is dispersed in the other as microscopic droplets, rods, platelets, or other geometries. The stability of the morphology when the combination is remelted for extrusion or injection and solidified is also crucial. For example, remelting can lead to total change in morphology from rods to spheres.

In the CSP three-phase technology, a web-like morphology of one polymer (e.g., PEO) within the other (e.g., PE) is created. The web forms a channel structure which generates continuous pathways from one region of the PEO polymer to other regions of PEO within the matrix (Fig. 1). The combination can be remelted and processed and still exhibit the channels in the final plastic piece. The active particulate resides on the surface of the channels after the melt solidifies.

• Water Removal. When the channels are selected for moisture transmission, as with the PEO or polyethylene glycol, moisture diffuses through the channels into the plastic matrix. If the incorporated agent is a desiccant particle, it will absorb the water so that moisture is continually wicked up the channel to the particle. The plastic matrix then is an active, controlled-transport desiccant.

• Gas Absorption. By selecting the active agent, gases other than water vapor may be absorbed: adverse odors emitted from low-level biochemical deteriorations such as lipid-oxidation aldehydes and ketones; ethylene from fresh fruit respiration to extend shelf life; and excess carbon dioxide, also from respiring produce to prevent untoward reactions. Active agents may include ferrous-based oxygen scavengers to remove residual oxygen and thus retard adverse oxidative reactions so common in foods and beverages. Obviously, the employment of active agents requires that the basic barrier properties of the plastic package structure are present. No amount of desiccant can overcome a package that is not a moisture barrier.

• Release of Aroma and Other Volatiles. Antimicrobials such as chlorine dioxide or alcohol can be released and volatilize from the active agents through the channels and into the environment surrounding the product contents. Aromas encapsulated in particulates might be released and/or volatilized to transit down the channels to permeate and thus enhance the product.

Package Structures
All materials employed in the constructions are apparently Generally Recognized As Safe (GRAS) under Food and Drug Administration regulations. The actual applications include packages for many medical diagnostic products as well as food contact applications like vials for effervescent tablets containing vitamins and minerals:
• Flip-Top “Leakproof ” Vials. To envision this package, think of vials of M&M’s Minis® milk chocolate candies in children-friendly semi-rigid plastic tubes, but with an additional plastic sleeve inside surrounding the interior periphery. The vial (Fig. 2) is injection-molded polyolefin, but the desiccant sleeve is three-phase plastic composition with channeling from PEG and moisture absorption via the desiccant particulates within the channel matrix. 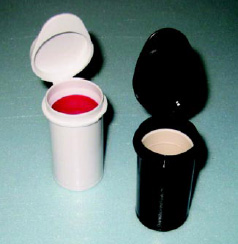 CSP uses a 2-shot molding process to fuse the desiccant plastic sleeve to the inside of the PP vial wall. Using this structure, the moisture environment within a vial of glucose test strips may be maintained at a specified level. When the package is opened and a glucose test strip is removed, the vial may be snap-cap reclosed tightly. The desiccant will then remove any moisture that has entered by exposure to the external atmosphere and, within one minute, return the internal package environment to a relative humidity condition to retain activity of the test strips (Fig. 3). CSP Technologies’ trade name for this package is Activ-Vial™.

• Dispensing Systems. These include tablet and edible film dispensers that retain a moisture-tight seal during use life

• Aluminum Foil Packaging. This would incorporate the three-phase system into the package interior.

• Films and Labels. These would absorb moisture, oxygen, or odors; examples could include DNA test strips, Serex diagnostic strips, and transdermal patches. 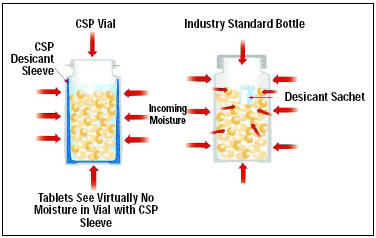 Taking Food Protection to a New Level
MIT’s Langer said, “CSP’s interconnecting channel technology is a breakthrough in materials science which allows controlled transport of a wide variety of small molecules through polymers, thus enabling a myriad of applications for absorbing and releasing chemically active molecules for use in pharmaceutical, agricultural and other sectors. . . .” We can add “food packaging” to this list.

This medium for application of active packaging compounds represents a probable major paradigm in food packaging—carrying active packaging to a new dimension in applicability by removing the barriers and exposing the interactivity between package and product. This set of technologies harbors the potential to alter the entire universe of protection of food from its natural environment through packaging.