Size reduction can be a critical operation in food processing. For example, cereal milling relies on size reduction by crushing or fracture to yield a variety of particles which can be sorted by screening to give fractions that are higher in fiber, protein, or starch. Milling works because cereal grains are relatively hard and break under stress. Proper control of moisture is important to control the physical properties and thus give the desired particles without excessive dust on the one hand and without flaking on the other hand. (Of course, under different circumstances, flaking is the desired result, using very similar equipment.) 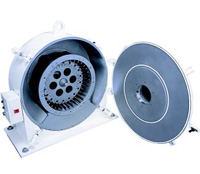 Grinding of meat is a size-reduction operation which is essential to the production of sausage, hamburger, lunch meats, and other processed meats. Rather than with moisture, the physical properties are controlled by temperature. Meats are typically ground at near-freezing temperatures, where the meat is firm and can still be cut. If the temperature is too low, the meat fractures into undesirable fragments, and if the temperature is too warm, the meat smears and does not produce the distinct pieces that are generally desired. For some processed meats, a fine emulsion is sought, so warmer temperatures may be accepted, even preferred.

Random or Uniform
Size-reduction processes may be divided into those that produce random particles or pieces and those that produce pieces that are more uniform. A random process produces a size distribution. In some cases, the extremes—the smallest or the largest—may be undesirable, while in others the mix can be used completely. If only one portion of the size distribution is sought, there must be a separation or fractionation process. If smaller particles are desired, the larger ones may be screened out and recycled. Very fine particles are often discarded as waste but in some cases may be treated to create larger particles. An example of this situation is sugar grinding followed by granulation to create a size distribution suitable for tableting or compacting. Many familiar confections are made from crystalline sugar and liquid sweeteners this way.

A versatile machine for creating particle-size distributions is a hammer mill, such as those made by Prater, Inc., Cicero, Ill. Regional Sales Manager Joe Skafar (phone 708-656-8500) explained that his firm offers hammer mills, fine grinders, and classifier mills. Hammer mills have a rotor inside a perforated cage or screen. The rotor has blades attached in any of several patterns. The blades swivel at the attachment point and can be reversed as they wear to extend their life before being replaced. A fine grinder (shown above) has fixed blades and closer clearances between the blade tip and the screen. The classifier mill incorporates a separation step to retain oversize particles for continued grinding, and is commonly used for sugar.

Mills are routinely used on cereals, though roller mills give a more narrow size distribution. They are also used to make bread crumbs, recycle breakfast cereals, and finish dry mixes, especially those in which fat may be incorporated.

One way to avoid excessive fines is to stage milling with intermediate screening. The desired size range of particles is removed after each step, and the overs are ground again. This creates a more complex process but may result in higher yield.

Dust is frequently an issue in hammer milling, so hammer mills are often enclosed in blast-proof rooms and must have explosion-proof electrical controls. Because typical applications are for dry materials, they may be constructed of carbon steel, but they can also be built of stainless steel if required.

Another variation on random milling is attrition milling, in which particle-to-particle contact in a high-velocity air stream causes particle disintegration. Lighter and smaller particles may be carried off by the air stream, or the entire stream may be separated by screens or sifting. Sugar is often ground this way. Particles must be hard and brittle to perform properly.

Uniform Cutting
Where a mill might be compared to using a hammer, coffee grinder, or mortar and pestle, cutting is more like using a knife. If one wants a slice, strip, or dice, one can use a knife to make one, two, or three cuts of a food. Chefs know how to do this very fast and accurately without losing a digit.

Urschel Laboratories Inc., Valparaiso, Ind., specializes in making machines that slice, cut, and dice many different foods. Physical properties, size, and capacity dictate which machine is appropriate. The most complex machines make three cuts to give dice, cubes, or other shaped pieces with quite regular dimensions. Tim O’Brien, Vice President, Sales (phone 214-464-4811), described how Urschel makes all of its own parts, including fasteners. The plant in Valparaiso has three foundries, for stainless steel and bronze. Each of the many varieties of machines is built to order, one at a time, by a team. Every part is kept in stock and shipped all over the world as needed.

Replacement parts are a significant portion of Urschel’s sales because the knives and cutters eventually wear out. Some can be resharpened using another machine made by Urschel, but most are replaced. Familiar foods probably cut on Urschel machines include potato chips, pickles, mushrooms, and celery. There are few foods they cannot cut, but they are most dominant in fruits and vegetables. 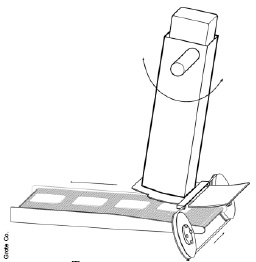 Deville Technologies Inc., Montreal, Quebec, Canada, has focused its cutting and shredding machines on cheese and related products, and also makes machines to cut and shred meats, fruits, and vegetables, according to Anthony del Viscio, Business Development Manager (phone 514-366-4545). Deville was originally part of a firm that built cheese plants and developed shredding technology that was spun off to form Deville. The machines can accept larger blocks of cheese, up to 40 lb, and shred at rates of 10–20,000 lb/hr. The same machine can dice meat at similar rates. One Deville machine replaces 3 or 4 competing devices. An important part of its sanitary design is a drive separate from the cutting area. This reduces the opportunity for contamination by lubricants.

A unique form of uniform cutting is offered by Grote Co., Columbus, Ohio, according to Bob Grote, Sales Director (phone 614-868-8414), whose uncle founded the firm. Originally, the Grote Accuband slicer was devised to cut and place pepperoni on pizzas. It still is in wide use on such commercial lines, but that market is no longer Grote’s primary target.

The slicer has a series of tubes sized to take the specific product, such as pepperoni, bacon, or fruit. The tubes rock back and forth over a moving band-saw blade, cutting a slice with each pass and dropping it precisely under the tube. Thus, as originally conceived, a bundle of tubes could cover a pizza crust with meat all at once. As the feed piece is depleted, it is replaced with another by the operator.

A current high-volume application is slicing and placing bacon for pre-cooking One machine can place pieces across a wide belt feeding an oven, whereas several conventional slicers would otherwise be needed.

Another interesting application is pre-made sandwiches, where meat and cheese can be sliced and placed on pieces of bread directly, without the labor of hand placement. Pre-sliced vegetables for salads and slices of fruit for drying are two other applications.

In general, Grote focuses on the “slice and place” market. Like Urschel and Deville, Grote builds its own machines. Grote has also cooperated with Urschel to integrate machines for special situations.

Often Requires Other Steps
Size reduction is a common unit operation in food processing. Unlike in other industries, there often is a requirement for precise shapes made from irregular raw materials. There is the usual concern for sanitation and the hazard of metal contamination. Cutting agricultural raw materials introduces the risk of stones or other objects that could damage equipment, so pre-screening, inspection, and cleaning are important. Metal detection almost always follows cutting or slicing.

Random size distributions are often produced by chopping, hammer milling, and roller milling, depending on the physical properties. Additional separation steps can improve yield at the cost of greater process complexity. Finding a use for fines, including agglomeration to make larger particles, is often necessary.