Listeria monocytogenes began to emerge 20 years ago as a problem in processed meats and poultry products, with a foodborne illness outbreak from hot dogs and delicatessen luncheon meats that resulted in 101 illnesses, 15 adult deaths, and 6 stillbirths or miscarriages associated with the outbreak. 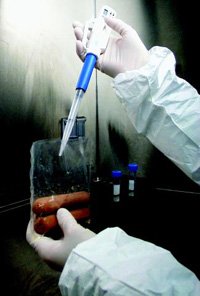 According to the Centers for Disease Control and Prevention, the occurrence of cases of listeriosis decreased between 1996 and 2002, but there still are an estimated 2,493 cases of listeriosis and 499 deaths annually. A high case-fatality rate of 20 deaths per 100 cases of illness is predominately found among newborns and the elderly.

A “Bad Bug”
The word Listeria did not come up in food safety circles 50 years ago. Everyone processing foods was still too worried about how to protect foods from “botulism,” and after that problem was solved with appropriate heating temperatures, new “bugs” like Salmonella and then Escherichia coli learned how to threaten the food supply and microbiologists’ careers. These problems are still an occasional cause of food illness, but the Listeria bug won’t go away.

L. monocytogenes is listed in the Food and Drug Administration’s “Bad Bug Book” (formally titled Foodborne Pathogenic Microorganisms and Natural Toxins Handbook) as a Gram-positive bacterium which is motile by means of flagella. It is found in soil and water. Vegetables can become contaminated from the soil or from manure used as fertilizer. Animals can carry the bacterium without appearing ill and can contaminate foods of animal origin, such as meats and dairy products. It is found in a variety of raw foods, such as uncooked meats and vegetables, as well as in processed foods that become contaminated after processing, such as soft cheeses and cold cuts from the deli counter. Unpasteurized raw milk or foods made from this milk may contain the bacterium.

Listeria can be killed by pasteurization and cooking, but the challenge is with ready-to-eat (RTE) meat products which may become contaminated after cooking and before packaging. Listeriosis, a serious infection caused by eating food contaminated with L. monocytogenes, has recently been recognized as an important public health problem in the United States.

Listeriosis symptoms are fever, muscle aches, and sometimes gastrointestinal symptoms such as nausea or diarrhea. If the infection spreads to the nervous system, other symptoms such as headaches, stiff neck, confusion, loss of balance, or convulsions can occur. Pregnant women are about 20 times more likely to get listeriosis than other healthy adults. Healthy adults and children occasionally get infected with Listeria but seldom become seriously ill.

General recommendations for consumers to reduce the risk of contracting listeriosis include thoroughly cooking raw food from animal sources, such as beef, pork, or poultry; washing raw vegetables before eating; keeping uncooked meats separate from vegetables and from cooked foods and RTE foods; avoiding unpasteurized milk or foods made with unpasteurized milk; washing hands, knives, and cutting boards after handling uncooked foods; and consuming perishable and RTE foods as soon as possible.

Persons at a high risk (pregnant women and people with weakened immune systems) should not eat hot dogs, luncheon meats, or deli meats unless reheated until steaming hot; let fluids from hot dog packages (drip) onto other foods or utensils; eat soft cheeses unless the label clearly states they are made from pasteurized milk; eat refrigerated pates or meat spreads; and eat refrigerated smoked seafood unless in a cooked casserole (canned or shelf-stable smoked seafoods may be eaten).

All processors of RTE products that are exposed to the environment after lethal treatments will be required to develop written programs describing HACCP programs or Sanitation SOPs designed to control any contamination by Listeria. They must also verify the effectiveness of their programs through testing and share the results with FSIS. Processors are encouraged to make food safety enhancement claims on the RTE product labels to inform consumers who may be more susceptible to listeriosis.

Numerous scientists at universities and at industry plant facilities continue to study the presence of Listeria in various food processing facilities and on food processing equipment, as well as the location and resistance of the pathogens to treatment. The efforts of scientists at the Center for Food Safety, University of Georgia, Griffin, were recently highlighted at a meeting of the Chicago Section of the Institute of Food Technologists by the director of the Center, Michael P. Doyle. He suggested that the solution lies in putting Listeria in perspective.

Although some food industry solutions to Listeria control have effectively reduced Listeria contamination in processing facilities and on foods, he said, some processing areas continue to be problematic. An example is floor drains in processing plants. Efforts to use competitive exclusion bacteria that grow as biofilms in presence of Listeria have indicated some success. Doyle also suggested that new strategies may be necessary to further reduce the incidence of listeriosis.

Listeriosis is principally an “isolated” public health problem which is being predominantly associated with specific high-risk groups, Doyle said. He suggested that eliminating Listeria or preventing its growth should be emphasized by placing greater scrutiny and restrictions on high-risk foods (food industry responsibility), placing fewer resources on low-risk products (regulatory agency responsibility), and educating high-risk populations about foods they should avoid and how to apply better food-handling practices (public health agencies responsibility).

Doyle suggested that the ultimate realistic long-term public health goal should be to reduce listeriosis to as low a level as practically possible but to recognize that it is not a foodborne illness that can be eliminated.

• Implement an environmental sampling program in areas where RTE foods are exposed.

• Respond rapidly and effectively to each positive product contact sample.

• Verify by followup sampling until the source of Listeria has been detected and corrected.

• Conduct a short-term assessment (last 4–8 samplings) to facilitate detection of problems and trends.

• Conduct a long-term assessment (quarterly, annually) to detect widely scattered positive sites on a packaging line and to measure progress toward continuous improvement.

“With improvements in plant and equipment design, and other factors,” Tompkin summarized, “the level of control can be significantly improved and the likelihood of product contamination can be exceedingly low.”

The public health concern for foodborne listeriosis reduction has also interested scientists worldwide. A meeting of the ILSI Risk Science Institute’s Steering Committee and Expert Panel on Listeria monocytogenes in Foods was held in France in March 2004. The topic of discussion was “Achieving Continuous Improvement in Reductions in Foodborne Listeriosis—A Risk Based Approach.” Doyle served as chair and Tompkin as a member of the committee.

The committee said that the key risk factors for listeriosis were high-risk consumers and consumption of high-risk food and that recommendations for reduction should focus on prevention of contamination and growth of high numbers in foods in the manufacturing plant and at retail (both supermarket and foodservice) and education of the susceptible populations at home.

A summary of the committee report was provided by ILSI to the Codex Commission on Food Hygiene. More information from this report is available from Isabel Walls at the ILSI Risk Science Institute at [email protected] or in the Journal of Food Protection.

It appears that all interests are heading in a unified direction to reduce the public health problems of controlling Listeria and preventing listeriosis. However, the problem may never completely go away, and only a lax processing control procedure will become a negative front-page headline.

Testing for Listeria
To determine the status of and advances in rapid methods of testing for Listeria in foods, I contacted two experts in that area: Purnendu C. Vasavada, Professor in the Animal and Food Science Dept. at the University of Wisconsin-River Falls, and Daniel Y.C. Fung, Professor of Food Science in the Dept. of Animal Sciences & Industry and Director of the International Workshop on Rapid Methods and Automation at Kansas State University, Manhattan.

Vasavada said that rapid methods for Listeria detection are needed for the following reasons:
1. The rapid detection of L. monocytogenes and other pathogens is necessary because pathogenic contamination of foods, particularly RTE foods, can be critical for ensuring the safety of consumers. This is particularly true for high-risk groups, including cancer patients, individuals taking drugs that affect the body’s immune system, alcoholics, persons with low stomach acidity, individuals with AIDS, and pregnant women. Severe listeriosis can cause meningitis, abortions, septicemia, and a number of other maladies, some of which may lead to death.

3. Listeria are often found in the food processing plant environment before they are detected in the product. Rapid methods for detecting Listeria in the plant environment can allow proactive management of potential pathogen problems by implementing a HACCP system.

Vasavada said that several “improved” culture methods are available for detection of Listeria, but they require overnight incubation and are not necessarily “rapid.” The enzyme-linked immunosorbent assay (ELISA) is one of the most prevalent formats used for Listeria detection in foods. Tests involving immunomagnetic separation (IMS) or immunoprecipitation technology are also popular. Several DNA-based assay formats employing specific probes and the polymerase chain reaction (PCR) techniques have been developed commercially for detecting Listeria. Finally, techniques employing biosensors or DNA chips are being developed, with potential for near real-time and on-line monitoring of Listeria and other pathogens in foods.

Regarding the future of Listeria testing, Vasavada said that as a rapid method is used more frequently, its benefits and limitations will become more apparent. Some tests may be more suitable than others in distinct testing situations or for testing certain types of food. Careful consideration must be given to the type of food, complexity of method, specificity and selectivity, regulatory acceptance, and other factors before selecting a particular method.

While interest in molecular methods may be increasing, he concluded, other rapid methods, including immunological methods, will provide excellent alternatives to conventional culture methods for rapid detection of Listeria.

Fung summarized his outlook on rapid methods in the near and far future for Listeria monocytogenes (and other foodborne pathogens) as follows:

Advances must be made in the area of sampling and concentration technologies to capture and present target cells, cell components, and metabolites in a large enough number and in a suitable form by filtration (membrane, ultrafiltration, reverse osmosis, fiber filters, etc.), centrifugation, flocculation, immunocapture (solid support or immunomagnetic separation), DNA/RNA hybridization, or other methods, so subsequent effective analysis can be made.

Enumeration of live, injured, and dead target pathogens will still be needed in food microbiology. This can be achieved by direct microscopic observation using differential staining techniques to enumerate live vs dead cells in less than an hour or by sophisticated CCD scanning devices. There is still a serious concern about the inability of microbiologists to rapidly detect injured target cells in processed foods.

Many advancements have recently been achieved in the field of molecular biology, including sequencing of DNA and RNA, PCR, real-time PCR, pulsed field gel electrophoresis, ribotyping, nucleic acid sequence based amplification (NASBA), and others. Target microbes and molecules can be separated and detected by microfluidic, proteomic, genomic, microarray, and biochip technologies, biosensors, infrared sensors, electronic nose, and mass spectrometer techniques.

Fung concluded by saying that we have come a long way from shortening the detection time of foodborne pathogens from seven days to about half a day at present. Many systems are approaching a detection time of “one shift” (6–8 hr). It is almost certain that in the near future a 4-hr test—from the time of sampling of a food to the time of detection of L. monocytogenes—will be developed.

A list of approved Listeria test methods is available from AOAC International at www.aoac.org/testkits/microbiologykits.htm.