My husband’s grandfather is still an active leader within his church, travels the globe, and makes daily treks to downtown Seoul, Korea, to play the stock market . . . all at the age of 92. When asked what his secret to healthy longevity was, he simply answered, “I drink green tea every morning.” He just may be the poster child for the benefits of tea. 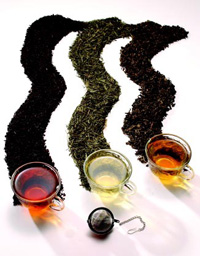 In addition to soy, green tea is another staple of the Asian diet that consumers are increasingly clamoring for because of its health benefits. Research focusing on tea’s polyphenols, which include epigallocatechin gallate (EGCG) and theaflavin, has boosted tea’s image as a health-promoting beverage. Here is a look at some of the areas in which tea has been shown to play beneficial roles.

Cardiovascular Health
Recent studies focusing on tea offer some evidence that it may play a role in promoting heart health. Green tea has been linked to the prevention of plaque formation in the arteries and lowering of cholesterol.

• Artery Health. Using an animal study, researchers at Cedars-Sinai Medical Center in Los Angeles found that EGCG could help prevent the formation of plaques that can block blood flow in the arteries (Chyu et al., 2004). The polyphenol, however, had no effect on the fatty deposits once they had formed. EGCG, provided by Lipton Tea, was injected into mice that were genetically predisposed to rapid development of plaque and whose arteries had been injured to spur that development. Other mice of the same strain with similar damage did not get the antioxidant.

Examination of the arteries after three and six weeks showed that the formation of new plaque in mice that got EGCG was reduced significantly, while plaques continued to form in the mice that did not get the antioxidant. The treatment had no effect on plaque that existed when the injections began.

“It appears that antioxidant therapy would have therapeutic benefits only if initiated during a critical window very early in the formation of plaque,” said study author Kuang-Yuh Chyu. It was noted, however, that while antioxidants have worked in laboratory tests and animal studies, results in human trials have been disappointing. Most animal studies “are started when the animals are young, while randomized clinical trials typically enroll adult patients with varying stages of plaques,” Chyu noted.

In another study, a team of researchers at the U.S. Dept. of Agriculture’s Human Nutrition Research Center in Beltsville, Md., showed that five servings of black tea (fermented green tea) per day reduced LDL cholesterol by 11.1% and total cholesterol by 6.5% in mildly hyper-cholesterolemic adult study participants (Blumberg, 2003). The team investigated tea’s benefits by comparing the effect of five 6-oz servings per day of either black tea, a caffeine-free placebo, or caffeinated placebo beverage in 15 mildly hyper-cholesterolemic adults for three weeks.

Cancer
The polyphenols present in tea may also play a role in the prevention or treatment of various types of cancer.

• Smoking Damage. At the Arizona College of Public Health, University of Arizona, and Arizona Cancer Center in Tucson, scientists studied 143 heavy smokers and the effect of consuming four 8-oz servings per day of either decaffeinated green tea, decaffeinated black tea, or water for four months (Blumberg, 2003). The results showed that the levels of 8-OHdG, an indicator of oxidative DNA damage, dropped by a significant 31% after four months in the green tea group, but not in the other two groups. Oxidative DNA damage is implicated as a contributor to cancer development as well as cardiovascular disease.

“Tea polyphenols are not only powerful antioxidants but also inducers of phase-2 detoxification enzymes, resulting in the body’s ability to quench more oxidative DNA damage, reducing cancer risk,” said Iman A. Hakim, Division Director of Health Promotional Sciences at the Arizona Cancer Center and Research Associate Professor at the College of Public Health, University of Arizona.

At the University of Rochester’s Environmental Health Science Center, researchers found that EGCG and epigallocatechin (EGC), present in green tea, shut down the aryl hydrocarbon (AH) receptor, one of the key molecules that tobacco relies on to cause cancer (Palermo et al., 2003).

The polyphenols shut down the AH receptor in cancerous mouse cells, and early results indicated that the same is true in human cells as well. In the laboratory, the AH-inhibiting effects of green tea became evident when EGCG and EGC reached levels typical of those found in a cup of green tea. But the scientists said that how green tea is metabolized by the body is crucial to its effectiveness, and that results in the laboratory don’t necessarily translate directly to the dinner table.

• Leukemia. At the Mayo Clinic, researchers found that EGCG interrupts the communication signals needed by cancer cells to survive, prompting them to die in 8 of 10 patient samples tested in the laboratory (Lee et al., 2004). The cells came from patients with B-cell chronic lymphocytic leukemia (CLL), most often diagnosed in patients in their mid-to-late 60s and currently without a cure. While chemotherapy is administered in the most-severe cases, doctors have tended to stall use of this treatment in early-stage patients, some of whom may live with it for decades and not require treatment. Green tea could, however, offer a less harmful but effective alternative for this category of patients.

“We’re continuing to look for therapeutic agents that are nontoxic to the patient but kill cancer cells, and this finding with EGCG is an excellent start,” said Neil Kay of the Mayo Clinic. “Understanding this mechanism and getting these positive early results gives us a lot to work with in terms of offering patients with this disease more effective, easily tolerated therapies earlier.”

• Prostate Cancer. Research at the University of California at Los Angeles suggested that green and black tea polyphenols could slow the growth of prostate cancer cells (Strax, 2004). The polyphenols appeared to be quickly absorbed in human prostate tissue, and they were detectable in prostate tissue after a very limited consumption of tea.

More important, the scientists found that prostate cancer cells grew more slowly when placed in a medium containing blood serum of men who had consumed either green or black tea for five days, compared to serum collected before the men began their tea-drinking regimen. Serum from men who drank comparable amounts of diet or regular soda showed no such slowing in cancer cell proliferation.

Both black and green tea are therefore promising natural dietary supplements for chemoprevention of prostate cancer, according to Susanne Henning, researcher at the UCLA Center for Human Nutrition. She plans to investigate whether consuming larger amounts of tea polyphenols in the form of green tea extract supplement capsules can enhance this effect.

• Bladder Cancer. Researchers at the Medical College of Ohio in Toledo found that EGCG blocked the growth of bladder tumors in rats (Kemberling et al., 2003). They identified a dose that could kill all cancer cells after 2 hr of incubation. They then tested EGCG on rats with tumor cells implanted in their bladders. Thirty minutes after tumor cells were injected, they treated half the rats with EGCG; the others were not treated. When examined three weeks later, 64% of the animals treated with EGCG were free of tumors, while all of the untreated animals showed tumor growth.

Sleeping Easy with Tea
Aside from the polyphenols, an amino acid present in green tea has been shown to possibly aid in healthier slumber. L-theanine, offered as Suntheanine by Taiyo Kagaku Japan, improved the sleep of young men in Japan.

The research was conducted at the National Center of Neurology and Psychiatry at the National Institute of Mental Health (NIMH) in Tokyo. The blind crossover study included 22 young men (12 daytime workers with an average age of 28 years, and 10 students with an average age of 26 years). After a three-day acclimatization period, the men were given 200 mg of L-theanine or a placebo 1 hr before bedtime for six days. They were then crossed over to the other treatment group. Sleep quality was assessed by interviews on waking up, self-reported questionnaires, and a wrist actigraph to record bodily movements during sleep.

The researchers reported that all subjects reported a significant absence of feeling exhausted and a reduced need for sleep when administered with the L-theanine, compared to the placebo.

Seven of the 10 students had improved sleep efficiency and reported a superior mental state prior to sleep and a decreased occurrence of nightmares. Total sleeping time did not alter between the two groups.

“Our clinical study strongly suggests that Suntheanine supplementation of young men can improve both the quality of sleep and the mental state of being refreshed on waking up,” said the study’s author, Shuichiro Shirakawa, a professor at NIMH.

Blumberg, J. 2003. Introduction to the proceedings of the Third International Scientific Symposium on Tea and Human Health. J. Nutr. 133: 3244S-3246S.