The Food and Agriculture Organization estimates that at least 5–10% of the world food supply is lost annually to fungi and mycotoxins—poisonous chemicals produced by molds during their growth on foods, feeds, and various agricultural commodities such as cereal grains, oilseeds, and nuts (Bullerman, 2004). In the United States, the estimated annual cost of fungal and mycotoxin contamination of food and feed is $418 million to $1.66 billion.

According to Lloyd B. Bullerman, Professor of Food Microbiology, Mycology & Mycotoxins in the Dept. of Food Science at the University of Nebraska-Lincoln, the molds that produce mycotoxins are members of the kingdom Fungi and are considered to be microfungi, as opposed to macrofungi such as the toxic mushrooms. Mushroom toxins, he said, are not considered mycotoxins because they are an inherent part of the mushroom or fungus; thus, the toxic mushrooms are inherently poisonous. Mycotoxins, on the other hand, are excreted and are not an inherent part of the mold.

Mycotoxins cause toxicity by acting at the cellular level through diverse mechanisms related to their particular chemical structures, he said. The effects of mycotoxins on humans and animals are dose-related and include acute and chronic effects and, in the case of some mycotoxins, carcinogenicity and suppression of the immune system.

Mycotoxins were first recognized as potential disease agents for humans and animals in 1960, when more than 100,000 young turkeys and other young farm animals in England died from poisoning by feed containing contaminated peanut meal imported from Brazil (Bullerman, 2004). It was eventually shown that the peanut meal was contaminated with a mycotoxin that ultimately became known as aflatoxin, named for the mold that produced the toxin, Aspergillus flavus. Ultimately the term mycotoxin came to designate a family of compounds.

Talking to the Experts
I asked Bullerman whether mycotoxins are a continuing or growing problem today, and he offered the opinion that the most serious problems with mycotoxins tend to be found in tropical and semi-tropical regions where storage conditions are poor. The problem is less serious in the U.S., although sporadic outbreaks occur and certain commodities such as wheat and barley have had a perennial problem with Fusarium, Head Blight, or “scab,” which varies considerably in seriousness depending on the weather, particularly cool wet conditions during flowering. Corn may be contaminated with fumonisins and sporadically with deoxynivalenol (DON, or vomitoxin) and aflatoxin.

A thorough study of selected reports of potentially toxic mold isolated from various foods or agricultural commodities was summarized by Bullerman and Gourama (2001). They said that molds add beneficial characteristics to many consumable and popular foods, are used to synthesize antibiotics, and produce foods such as cheeses, soy sauce, miso, tempeh, and other delicacies but that toxigenic molds have caused food safety problems for as long as foods have been harvested and stored. The molds that produce the mycotoxins of greatest concern are found in the genera Aspergillus, Penicillium, Fusarium, Alternaria, and Claviceps.

Of the 20 or more naturally occurring mycotoxins, they said, the aflatoxins, ochratoxin, zearalenone, deoxynivalenol (or nivalenol in some regions), and fumonisins are of greatest concern. T-2 toxin is also of concern, but is thought to occur with much lower frequency than these five mycotoxins.

Analytical methods for detection and quantitation of mycotoxins, they said, are influenced by many factors. No single method can readily be used for all of the mycotoxins, though some multi-toxin detection methods have been published. Obtaining a true representative sample is critical to achieving accurate analytical results. Once a representative sample is obtained, the mycotoxin must be extracted from the food or commodity. Extraction solvents for many mycotoxins are either organic solvents or combinations of organic solvents and water; water alone may suffice for a few mycotoxins. Frequently, mycotoxins must be purified to remove substances, such as lipids and pigments from the substrate, that will interfere with analytical techniques.

Another widely recognized researcher on mycotoxins is James J. Pestka, Professor, Dept. of Food Science and Nutrition, Michigan State University, East Lansing. When I asked him the status of mycotoxins as a problem and methodology for their detection, he indicated that it was an ever-recurring problem that is dependent on weather, region of the country, and type of commodity. In the Midwestern U.S., he said, there is a recurring problem with Fusarium head blight or scab in wheat and barley; in the Midwest and Northeast, wheat, barley, and corn can become contaminated with vomitoxin, requiring regulation by the Food and Drug Administration for detected levels; and in the Southeast and Southwest, aflatoxin is a problem with corn, cottonseed, peanuts, and when passed into milk.

Pestka suggests that it is the role of the food microbiologist to be knowledgeable of the tools and techniques used in this field. “Immunological methods used include attaching fluorescent probes to antibodies and quantitative estimation using ELISA techniques,” he said. “Nucleic acid probes can be used to detect the presence of rare pathogens, and hybridization assays can be used to ‘fingerprint’ the molecules present. This fingerprint can then be used to match microbes to a common source.”

Assays today can be run in five minutes, he said, but more time is consumed in proper sampling. Other confirmatory tests to compliment screening might include HPLC and GC-MS. Although Pestka coordinated early joint research by the university with commercial laboratory suppliers, “most R&D in further refinement of these techniques today is being conducted by the laboratory suppliers,” he said.

What Lab Suppliers Are Doing
When I asked several suppliers of mycotoxin testing equipment and kits to describe their opinions of the problem and any current research, there was only a slight indication that any urgent research was required.

“There is no such serious problems with mycotoxin testing. Sporadic outbreaks of such mycotoxins as DON, aflatoxin, and fumonisin continue to be a problem to grain growers and processors. The modern grain transportation system can make what used to be a localized, relatively minor outbreak a nearly national concern as the grain moves hundreds, and even thousands, of miles from where it was grown” and when contaminated grain gets mixed with good grain.

“Screening tests for mycotoxins are now available in extremely simple immunochromatic lateral flow tests in formats very similar to home pregnancy tests. ‘Traditional’ rapid screening and quantitative tests for mycotoxins are typically ELISAs that use disposable plastic microwells and a color change to indicate the presence of mycotoxins. Other testing methods used include immunoaffinity columns, GC, and the exacting laboratory HPLC methods.

“We are constantly investigating a wide array of techniques to meet the market’s constant demand for better, faster, and less costly tests. In the short term, our goal is to expand and enhance our extremely simple lateral flow strip tests for mycotoxins.”

R. Biopharm, Inc., Marshall, Mich., worldwide distributor of enzyme immunoassays for screening mycotoxins, explained first the status of mycologic food poisonings. “Approximately 200 mold types (pathogens, well as toxinogenic species and storage fungi) are known, and they form different types and quantities of mycotoxins. Illnesses caused through yeasts and molds usually do not develop as rapidly as bacterial food poisonings. Mycoses are illnesses where the disease is an infection caused by spores or cells of a fungus. Mycotoxicoses are illnesses that are caused by exposure to a mycotoxin. Most mycotoxins are secondary metabolic products which are thermostable, low-molecular-weight substances that are not antigenic. Toxin production takes place toward the end of the exponential growth phase and is influenced by many different factors, such as water activity values and temperature. The growth of fungi can also be dependent on pH, atmosphere, consistency of the substrate, nutrient available, and influence of sugars, salts, and preservatives.” 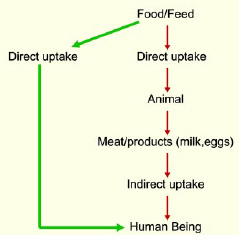 Aflatoxins, the company said, are an example of a genotoxic carcinogen (recognized as early as 1994), for which it is generally believed that there is no threshold dose below which no tumor-forming would occur. In other words, only a zero level of exposure will result in no risk. Ochratoxin, on the other hand, is produced by Aspergillus and Penicillium species and are typical “storage fungi.” They occur in a multiplicity of foods of animal and vegetable origin, but are not always in grain or cereal crops during the growing season. They grow in the mill and/or in the storage process. In Germany, even ochratoxin A has regulatory limits in coffees and selected dried fruits.

According to the company, three new European standard analytical methods for HPLC mycotoxin analysis have recently been approved. An Aflatoxin Total Screen Test has also now been approved by the U.S. Dept. of Agriculture for cereals and animal feeds. These enzyme immunoassay tests are ideal screening methods because they are low in cost and personnel demand, easy, and fast, and yield a quantitative evaluation with very high sensitivity.