Fermentation of foods can be considered spoilage that does some good. It has been said that if cheese were invented today, it might not be approved. As it is, some of our favorite and nutritious foods are created by fermentation. 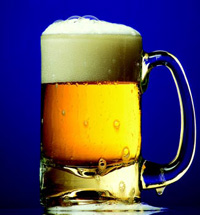 Fermented Foods
A wide variety of foods and beverages are produced through fermentation.

• Beverages. Wine and beer are ancient products, but mead was probably the first fermented beverage. It is made by diluting honey with water or fruit juice and allowing yeast to convert sugars (fructose and glucose) to alcohol and carbon dioxide. Since honey can be found naturally and could easily be diluted with water and since wild yeasts abound, it is likely that this combination occurred and the resulting intoxicant beverage became popular. Mead is notorious for giving memorable hangovers when used in excess, so the benefits and consequences of fermentation were probably discovered at the same time.

Fermentation of fruits and grains is a more complex process, requiring extraction of juice from grapes, apples, or other fruits and malting of grains. While barley is favored for fermentation because it has high concentrations of diastase enzymes that convert starch to sugar, wheat, rye, corn, and rice are also used. The beverages that result from fermenting each of these grains include beer, sake, and whiskies. Whiskies are made by distilling mashes from grains to concentrate the alcohol and flavors. Brandies are distilled from fruit wines.

Alcohol fermentation uses yeast under anaerobic conditions, that is excluding air. When yeasts ferment in the presence of air—aerobic fermentation—little alcohol is produced. There are many useful strains of yeast, and pure cultures are normally used in controlled fermentations, with many breweries and wineries maintaining proprietary strains. A special mold, Botrytis cinerea, sometimes grows on grapes and contributes a unique flavor to certain wines. The mold helps moisture to evaporate, concentrating the sugars and leading to a sweet wine.

The residue from fermentation of fruits is called lees, and it may be distilled to produce alcohol for fortification of wines such as port and sherry. After distillation, the material is difficult to dispose of because it has had most of its readily biodegradable content removed. Often, it is spread on fields as a soil amendment.

Spent grains from beer and whiskey production are high in protein and are used for animal feed. If necessary, they are dried, but that expense can be avoided if a farmer will take them wet.

• Vegetables. Sauerkraut and pickles are examples of foods preserved by fermentation. Sauerkraut undergoes 3–5 stages of bacterial conversion in which sugars are converted to organic acids. Salt, which is required to inhibit the growth of spoilage and pathogenic microorganisms, is added to shredded cabbage, and the mixture is stored in large vats, with air excluded by flexible covers.

Normally, the desired organisms are inoculated, though the natural flora may also be used. Some gas may be produced. Natural juice extracted by the added salt creates a brine. Cooler temperatures are preferred to help control the rate of conversion, which can take weeks, but very low temperatures can prevent bacterial growth altogether.

Special cucumbers, bred to respond well to the conversion process, are converted to pickles in much the same way—storage in large vats with added salt and other flavors, such as garlic. Elucidating the exact mechanisms of conversion and improving process control are still subjects of research, even for such familiar old products.

• Bread. Early breads were probably simple grilled wafers like tortillas and chapatis made from ground seed grains and water. It was observed that if dough were left alone, it grew and changed texture when baked. Before the malting process was understood, the Egyptians actually used a baking process with barley to make their beer.

Yeast-raised cereal products, such as bread and doughnuts, rely on the unique ability of wheat to hold a foam structure. Wheat contains gluten, a protein hydrocolloid, which forms a strong network when hydrated by water. As yeast converts sugar and starch to carbon dioxide and some alcohol, the gas is trapped in the gluten-and-starch matrix. Heating helps to further expand the dough, and the removal of water solidifies the foam into the familiar bread structure.

Heating in a steam atmosphere leads to a chewier and tougher crust, characteristic of many artisanal breads. San Francisco sourdough bread, made by returning a portion of the previous fermentation to the next, relies on a symbiotic combination of unique bacteria and an unusual yeast to create its distinct flavor. The bacteria have an absolute requirement for maltose, which was a previously unknown feature of any known strain of bacteria. Thus it had not previously been isolated because no isolation medium was routinely used with only maltose as an energy source. The yeast does not metabolize maltose. This meant that the yeast and bacterium were uniquely suited to live together. The bacteria produce organic acids which inhibit other strains of yeast from growing, which meant there was little competition for the special yeast.

Once this combination was identified and isolated at the U.S. Dept. of Agriculture’s Western Regional Research Center in Berkeley, Calif., in the late 1960s, it became possible to make authentic San Francisco sourdough bread anywhere, whereas previously all such efforts had failed.

• Meats. To make a good sandwich on sourdough bread, one needs tasty Italian salami. The best salami is made by an extended fermentation and drying process, in which salt and starter culture are added to ground pork before it is stuffed into a slightly porous cellulose casing. The green salamis are hung in a temperature- and humidity-controlled room for about 30 days. They can lose about 30% of their weight by drying, but before that occurs, lactic acid bacteria convert sugars to organic acids. Often a white mold grows on the outside of the casing, but it does not contribute significantly to the flavor and is perfectly safe to eat.

The low water activity achieved by drying and addition of salt in combination with the acid produced by the bacteria makes the product safe and almost shelf stable. Most such products are sold and kept refrigerated, but probably do not need to be.

• Dairy Products. Legend has it that yogurt and cheese may have been discovered by Mongol horsemen carrying mare’s milk in animal skins. Milk, of course, is nutritious but very perishable. Some forms of naturally occurring spoilage were found to give more-stable and good-tasting products. The variety of cheeses available is astounding—there are hundreds of types of cheeses found in most European countries. The varieties are distinguished by the milk source (cattle, sheep, and goats are most common), the way in which milk solids are concentrated (usually by precipitation with rennet or acid), and how the concentrated milk solids are fermented. Blue cheese, for example, involves both bacterial and mold fermentations.

Aging, salting, and packaging also help distinguish cheese varieties. Reactions include acid formation, gas formation, hydrolysis of fat, and hydrolysis of protein. Preservation is by a combination of low water activity, high acidity, and the antimicrobial action of chemicals synthesized by the bacteria and molds.

New Directions for Food Fermentations
Richard Mateles, proprietor of Candida Corp., in Chicago, Ill. (phone 312-431-1601), says the newer uses of fermentation for food additives such as enzymes, amino acids, vitamins, gums, and acids often involve specially developed microorganisms. He raised the interesting issue of using genetically modified organisms (GMOs) in the form of modified bacteria, for example, to produce food ingredients such as lysine. A food or feed containing added lysine produced this way would not contain any GMO, but one wonders if people anxious about GMOs would then be concerned.

Mateles also mentioned that yeasts have been modified to reduce diacetyl in beer (a flavor defect) and to make better use of sugars in bread fermentation but that these developments had not been commercialized, possibly because of concerns about GMO labeling and regulation.

Frank Verhoff, President of Ustech in Cincinnati, Ohio (phone 513-245-0969), also said that producing enzymes was a developing trend for fermentation. As examples, he cited pectinase (used to clarify fruit juices), phytase (used in animal feed to make available the phosphorus in phytate found in corn and otherwise is not digestible), and glucose oxidase and beta-gluconase (used in baking to retard staling).

He also discussed the increasing interest in omega-3 fatty acids for use in baby foods. The fatty acids can be extracted from some fish oils, but they are also produced by fermentation of algae and fungi. In baby foods, the fatty acids help mimic the composition of mother’s milk. There is also some assertion of benefits to adults, though whether the specific fatty acids are any more helpful than other unsaturated fatty acids is not clear.

Martin Okos, Professor of Food Engineering at Purdue University in West Lafayette, Ind. (phone 765-494-1211), uses fermentation to increase the value of food by-products. One example is conversion of lactose found in cheese whey, the dilute liquid left after precipitation of milk solids, to alcohol, acetone, butanol, and lactic acid. Lactic acid, in turn, can be polymerized into a “green” plastic, i.e., one made from renewable resources. Okos said that a joint venture of Dow and Cargill, called Cargill Dow LLC, Blair, Neb., is commercializing that process using lactic acid fermented from glucose.

A Continuing Challenge
Understanding some of the complex but empirical processes described above is a continuing challenge to food scientists and engineers. It is common for several microbes to operate symbiotically or sequentially, modifying their environment to favor some organisms and exclude others. Complex flavors are created by conversion of sugars, proteins, and fats. Textures are modified by gas generation, liquefaction of solids, and creation of chemicals.

Differentiation and classification of Chinese Luzhou‐flavor liquors with different geographical origins based on fingerprint and chemometric analysis April 6, 2021

Characterization and quantification of bioactive compounds from Ilex paraguariensis residue by HPLC‐ESI‐QTOF‐MS from plants cultivated under different cultivation systems April 6, 2021