The new labeling requirements for trans fatty acids, which are believed to contribute to heart disease, are requiring that fats and oils processors find new ways to deliver the functional properties provided by oils containing trans fatty acids. Several approaches are being taken. To put the new approaches in context, it is helpful to first briefly review oil processing. 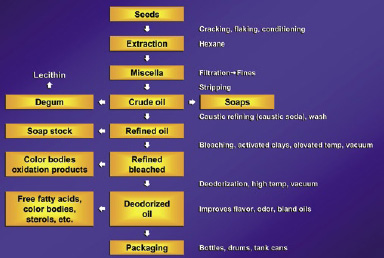 Vegetable Oil Processing
Vegetable oils are obtained from a variety of fruits, seeds, and nuts. Almost two-thirds of the world’s vegetable oil is provided by soy and palm. Soy is a legume, and oil palm produces a fruit and a kernel. Other sources include peanut, coconut, corn, canola (formerly called rape), cottonseed, cocoa (used almost exclusively in chocolate), olive, and other nuts and seeds (e.g., walnut, tomato, and grape). Fats are generally of animal origin and are distinguished from oils by usually being solid at room temperature, while oils are usually liquid. Fats are obtained by edible rendering, cooking scraps from butchering of cattle, pork, or other meats at relatively low temperatures. Tallow is the product from beef, and lard comes from pork. Animal fats are especially valued in baking and for the flavor they can contribute in frying.

Oil-containing seeds are stable after harvest if stored at the proper temperature and relative humidity, while fruits begin to deteriorate almost immediately after harvest. Lipases (fat-splitting enzymes) begin to act and cause loss of the valuable oil. Thus, oil-containing fruits are generally processed near the point of harvest, while seeds and nuts can be transported to larger central mills. This affects the scale and sophistication of the oil-recovery technology.

Each raw material has specific characteristics that affect how the oil is recovered. A cooking step is common for many materials. Cooking inactivates enzymes and denatures other proteins, releasing the oil and improving the processing properties of the matrix or meal. The residue that remains after oil is removed has its own value, usually as animal feed, but some can be converted to human food if handled carefully. If produced under unsanitary conditions, the meal may only be useful as fertilizer or fuel.

Some seeds and nuts may have shells or skins that are removed before processing, while others are retained because they help in oil recovery. Almost always, oil is first removed by pressing, originally in batches but now more commonly in continuous expellers. An expeller uses a screw on a shaft in a conical shell made of metal rods closely spaced. The screw compresses the cooked and ground meal, forcing oil through the slots in the shell. The shell is conical to create back pressure and to account for the loss in volume as the oil is removed. The friction and shear of compression and transport raise the temperature of the meal. It is important to avoid too high a temperature, lest the meal and oil be damaged and discolored.

Meal leaving the expeller still has residual oil, which is usually removed by solvent extraction. The most common solvent is hexane, and the process is normally countercurrent. Meal is contained in baskets, and fresh solvent contacts first the most exhausted meal, while solvent that has contacted meal and become loaded with oil contacts the freshest meal. The machines to accomplish this can be complex, moving either the baskets or the solvent path to achieve the countercurrent flow. The residual solvent in the meal is removed by drying and then recovered by condensation from the vent gases. After extraction, the oil is recovered by evaporation of the solvent. Since hexane is flammable and explosive, all equipment must be spark-proof.

To facilitate pressing, some fruits are slurried in water, and the oil is recovered by centrifugation. The water phase can present a waste disposal challenge, as it contains organic solubles and some residual oil. If water is used, the press cake must be dried before solvent extraction.

Crude oils are further treated to remove free fatty acids, color, and suspended particles of meal. Free fatty acids are neutralized with caustic, forming water-soluble soaps which are then washed with water. Color may be removed by contact with solid adsorbents, such as clay or carbon. Particles are removed by filtration. Each of these steps can result in oil losses. Depending on the end use, some refining steps may not be applied. For example, palm oil is naturally red from carotenoids found in the fruit. These have nutritional value as vitamins and are often left in the oil when it is sold in Asia, while oil for use in the West is refined to remove the color. Palm kernel oil does not have the color bodies. The meal from pressing palm oil is not normally extracted with solvents.

Oils consist of triglycerides, esters of fatty acids with glycerol. The fatty acids may be saturated, monounsaturated, or polyunsaturated, meaning they have none, one, or several double bonds, respectively. The double bonds are chemically reactive and so can be attacked by oxygen, producing peroxides and other products that contribute to rancidity. On the other hand, saturated fats have been associated with high cholesterol in the blood. Saturated fats also have higher melting points. Depending on the intended application, a given oil may need more saturation than it naturally has. This is achieved by hydrogenation, using a nickel catalyst.

Partially hydrogenated vegetable oil is then used in margarine, salad dressing, and baking. In the course of the chemical reaction, some double bonds are isomerized, meaning that the hydrogen atoms that were naturally in the cis form (on the same side of the double bond) are converted to the trans form (one on each side of the bond). There are some naturally occurring trans fatty acids, primarily in animal fats, such as butter, but at low levels. It is the artificially formed trans fatty acids that are the primary target of new labeling legislation, though all must be measured. Since the trans fatty acids contribute useful functionality to the partially hydrogenated oils, the challenge is to achieve the same functions some other way.

Producing Low-Trans Oils
One approach, taken by palm oil producers, to produce oils with low trans fatty acid content is to fractionate naturally hard components and blend them with other oils to produce the desired properties. Gerald McNeill, Technical Director of Loders Croklaan, Channanon, Ill. (phone 815-730-533), described the process that his company uses. Most palm oil, he said, is produced in Malaysia. The crude oil is produced in mills near the plantations and refined in factories at the coast. Fractionation is achieved by batch cooling of the refined oil followed by batch filtration. The hard fractions crystallize and consist mostly of stearin, a saturated fatty acid. The liquid fraction is olein and is stable enough for frying. Blends of the stearin with olein can achieve desired melting points. 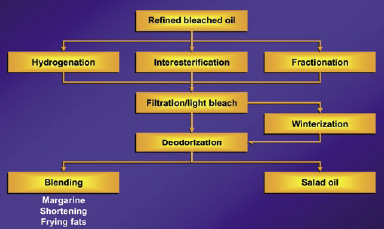 Another approach taken by many producers is interesterification, which, according to Gary List, Lead Scientist at the U.S. Dept. of Agriculture’s National Center for Agricultural Utilization Research in Peoria, Ill. (phone 309-681-6388), addresses the possibility that simple blending may not succeed because of solubility problems. List—who authored the article, "Decreasing Trans and Saturated Fatty Acid Content in Food Oils," in Food Technology (January 2004, pp. 23–31)—said that in interesterification fatty acids are transferred from one triglyceride to another, creating new molecules. One common approach uses sodium methoxide as catalyst. This is an organic base that can also cause hydrolysis of the triglycerides, leading to free fatty acids and loss of oil. The product of chemical interesterification must be washed with water to remove the catalyst and free fatty acids and then refined to remove color.

A new approach, List said, uses immobilized lipase enzyme in fixed-bed reactors. The lipase selectively rearranges fatty acids, leading to triglycerides with the desired melting points and other functional properties without loss of oil or formation of color. The catalyst is also reused. A typical arrangement has several reactors, with the oldest catalyst being the first to contact the oil and the freshest catalyst being the last. The catalyst does deteriorate with age, but this approach is more selective than the chemical approach.

Combining Steps in Pressing
Clextral Group, Tampa, Fla., has modified its twin-screw extruder to combine several steps in oilseed processing, according to Lionel Danos, Process Manager. A twin-screw extruder is often used in snack foods, cereals, and pet foods to cook, mix, and form powders into shapes. In the new process, oilseeds are cooked, ground, and pressed. Some of the oil leaves through a filtering barrel, then the meal is further pressed in parallel, pseudo-single-screw barrels. There are two shafts with intermeshing screws first, followed by the separate single screws. The barrel encloses the twin-screw segment and then is separated into two barrels for the pseudo-single-screw sections.

The main advantage over the conventional, multistep process is better temperature control and the convenience of a single machine. Electric heating controls the barrel temperature. Clextral believes that because of the short residence time and good temperature control, the new process can produce oils and meals with improved flavor and other properties. The company also believes that the ability to inject liquids, chemicals, or gases into the extruder could lead to some interesting new materials. The process has been demonstrated on soy, canola, flax, mustard, and sunflower.