Packaging technologies for use with nonthermally and minimally processed foods are a growing area of endeavor. Presentations at the 2005 IFT Annual Meeting + FOOD EXPO® provided pragmatic insights into the individual technologies and the present and potential connections among them. 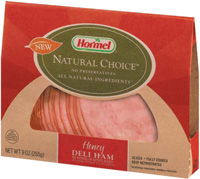 • Ionizing Radiation. Sealed Air Cryovac's Charles Barmore, the country's leading expert on packaging for ionizing radiation processing, asserted that United States regulatory authorities have not accepted any new package material for use in radiation of food for many years, one drawback to the advance of the 60-year-old technology. Only three facilities in the U.S. are operating to radiation-pasteurize ground beef, one of the key targets for nonthermal intervention. Especially at risk is the "high-oxygen" packaging of case-ready red meat, subject to adverse ozone generation when exposed to gamma or electron-beam radiation.

Mitec's singular technology (www.mitecinc.com), already commercial, might be a viable means to obviate many of the technical and regulatory challenges related to ground beef. Beef is ground and, as in many conventional operations, placed in oxygen-barrier expanded-polystyrene trays without closing the top. Open trays are conveyed through a nitrogen-flushed (reduced-oxygen) tunnel while being exposed to e-beam or X-ray irradiation to reduce the total and potentially pathogenic microbiological load. Immediately, under very clean environmental conditions, trays are hermetically heat sealed under 80% oxygen/20% carbon dioxide to produce oxymyoglobin red color plus modified atmosphere for extended chilled shelf life.

• Microwave Sterilization. Perhaps inspired by Alfa Laval's technically remarkable Multitherm and Classica microwave sterilization technologies of the 1980s and five years ago, respectively, is a derivative development sponsored by the U.S. Army Soldier Systems in Natick, Mass. A consortium of industry, government, and universities (www.microwaveheating.wsu.edu) is developing a technology to sterilize using microwave energy to heat prepackaged food in a pressurized environment, achieving times as low as 2.5 min. Note that this technology is really minimum heat rather than nonthermal processing, delivering very-high-quality ambient-temperature shelf-stable sterile food. The food, however, is still sensitive to oxidative biochemical deteriorations attributable to residual and entering oxygen, even in barrier packaging.

• Pulsed Electric Fields. In this technology, fluid food product is subjected to a rapidly cycling voltage differential that leads to microbiological cell wall rupture in the food, according to Howard Zhang, formerly with Ohio State University, now with the U.S. Dept. of Agriculture. Sterile product is transferred aseptically or by clean fill into barrier primary packaging.

• Ultra-High-Pressure Processing. Illinois Institute of Technology's George Sadler hinted that packaging for retort pouches might be translated for ultra-high-pressure processing (HPP) packaging. Subsequent laboratory analyses indicated that both temperature and pressure effects during HPP of packaged foods often lead to blistering and delamination of multilayer package structures. This effect may be due to minute lamination residual air cells that compress and decompress in a diesel-like ignition or flashing to generate the blisters. The differential of compressibility of plastic and metal in laminations may alter gas permeability. On the other hand, migration or permeation and heat-seal strength do not appear to be adversely affected. These early data represent research in progress, subject to change as new data are generated.

Not yet acted on by U.S. regulatory authorities, HPP has been demonstrated to be an effective method of food pasteurization and control of pathogens such as Listeria. Developments are underway to increase the pressure to 800 MPa and combine with low or high temperature to possibly achieve ambient-temperature microbiological shelf stability.

Several food products processed by HPP are now in the commercial market. Fresherized Foods (formerly AvoMex) offers the No. 1 guacamole in the country and is a leader among salsas. The company also offers smoothies in polyester bottles, fruit juices, and now some chilled entrees and meats. Menu Fresh is offering six HPP-pasteurized products, including precooked fajita meats and chicken steak. Hormel has introduced Natural Choice™ deli meats preserved by HPP, such as sliced ham. The recent successes suggest that, despite the questions about capital costs, packaging and process cycle times, HPP appears to have sufficient merit to warrant optimism.

• Active Packaging. Linking nonthermal processing and active packaging is a challenge for all involved because of an apparent momentary paucity of meaningful information marrying the two. Active packaging senses environmental change and alters the package to accommodate to the change. Most of today's active packaging centers around moisture control, oxygen scavenging, odor removal, and the potential for incorporation of antimicrobials into package structures. Related intelligent packaging senses and signals such variables as temperature, location (think RFID), and value, with the expectation that eventually a signal can be converted into control of an activity. However promising any or all nonthermal technologies might be now, much more effort must be applied to produce the effects envisioned.

Other Technologies Also Addressed
Other packaging technologies were also discussed:
• Antimicrobial Effects. A mass of data on edible packaging and their possible connection with active, and especially antimicrobial, components has been summarized by University of California’s John Krochta ([email protected]) Among the antimicrobials evaluated by Krochta and his colleagues are nisin, natamycin, EDTA, PABA, lysozyme, benzoates, and lauric, sorbic, lactic, and acetic acids. Application methods include coating and incorporation into the body of the structure. Results to date indicate that antimicrobial activity is demonstrable and that the compounds diffuse from the films into the foods. Obviously, much moredata are required before any definitive implications may be made.

• Surface Activation. Cornell University’s Joe Hotchkiss presented means to alter polymer surfaces to enhance activity in proximity with the food. His thesis is to activate the surface to facilitate covalent attachment of active agents for controlled release. One example was the release of methyl cyclopropylene to block ethylene in fresh fruits and thus prolong shelf life. A proposition was advanced to perform processing within the package (refer to BioMAP above) rather than as an engineering unit operation prior to packaging; e.g., incorporate enzymes into the structure to react with contents and alter their properties.

• Aseptic Packaging. Soon to be unveiled commercially as a package-material sterilant is an adaptation of peracetic acid and hydrogen peroxide reported to effect a kill on microbiological spores. Anand Mohan of Pennsylvania State University and Charles Sizer of International Process Development Associates have demonstrated inactivation of Bacillus subtilis spores with surface-active peroxyacids. Peracetic acid at the 2% level combined with octanoic acid increases spore kill dramatically at 50–70ºC in 10 sec, making the combination potentially quite effective for package material sterilization. The researchers attribute the kill to a synergy of OH–, hydroperoxyl, and superoxide.

• Radiofrequency Identification. Bruce Welt of the University of Florida offered a penetrating overview of RFID technology as applied to food distribution today. RFID is a means to collect data through a network of transmitters and readers to replace or at least supplement the bar code system that has been in widespread use for 30 years. One fundamental difference is that RFID assigns a specific identification code to every single package. The rationales are to save labor, reduce losses, and be able to reduce spoilage by knowing exactly where each item is at all times.

Passive RFID devices operate on electrical resonance with no power on the transmitter; i.e., they receive, harvest, and reflect power through an antenna and chip from the incident radiation from the receiver. Active RFID has its own battery power source. Challenges today include interference due to background radio frequency from electric motors, communications, etc.; water content of the packages; and metal, which acts as a shield or reflector.

Abbott Laboratories' entry into the field was initially to monitor narcotic drugs and later to track both drugs and foods. At present, RFID tags for Abbott are applied by the company's corrugated fiberboard case converter. To date, Abbott's case-read rates have grown to nearly 100%, largely in its own distribution channels and in movement from mostly drug store retail backrooms to shelves. Benefits include reduction of out-of-stock and shrink, proof of delivery, obviation of counterfeiting (a serious issue with ethical pharmaceuticals), and ability to track products.

Connecterra, a Cambridge, Mass.–based high-tech company specializing in infrastructure software for RFID, uses RFID to read the electronic product code (EPC), the unique identity for each package, at a distance, with no line-of-sight requirements, and rapidly, so that entire lots may be read virtually simultaneously. RFID information can be integrated into daily operations in plants and in distribution, e.g., for seller and buyer to instantly exchange data to facilitate movement.

The U.S. military is requiring containers to bear active or at least semi-passive RFID to track its myriad of materials. It has conducted successful 2004 trials to track the goods from "vendor to foxhole" using RFID technology. In the future, the military hopes to employ the technology for shelf-life modeling, tamper evidence, and biodetection.

Wal-Mart is the major driving force behind commercialization of RFID for distribution. Of the company's 18 distribution centers and 1,800 super centers, 3 distribution centers, 104 Wal-Mart stores, and 36 Sam's Club stores have installed about 14,000 pieces of RFID hardware. More than 100 suppliers are in the system, reading 3 million tags about 34 million times. Each Wal-Mart store may receive 30 truckloads a day to stock nearly 100,000 SKUs, suggesting the challenges of maintaining inventories where and when needed. In fresh produce alone, Wal-Mart has 190 suppliers who are charged to automatically replenish and ensure that the shelves are stocked properly. The eventual application of RFID in produce alone will reduce out-of-stock, spoilage, and labor, and facilitate rapid payments, appropriate returns for the investment.