Mixing two liquids together seems deceptively simple at fi rst glance. Even mixing solids into liquids appears easy, until one tries to do it on a scale of hundreds or thousands of gallons.

Mixing plays a major role in food processing. Fruit juice concentrates are routinely diluted with water and added sweetener to make beverages. Milk and sweeteners have emulsifi ers and fl avors added to make ice cream. Soft drinks are made by mixing sweetener, fl avor, and water with carbon dioxide. Salad dressings are made by mixing oil, vinegar, and fl avors. Sauces and soups are made by mixing tomato paste, vegetables, spices, and water. The list of examples could go on at great length. What are some of the operating principles and equipment choices? 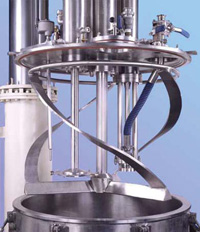 Operating Principles
All mixing involving liquids uses some form of energy to promote convection, the bulk movement of fl uid, and to reduce droplet size in the cases involving otherwise immiscible fl uids such as oil and water. The natural process of diffusion uses differences in concentration to drive a non-uniform mixture toward a more-uniform composition, but diffusion is very slow. Most people have witnessed the example of pouring cream into coffee or tea. If done carefully, it is possible to fl oat cream on top of the beverage. Just a few stirs with a spoon produces a uniform tan-colored drink. This is convection in action on a very small scale with thin liquids.

Mixing can be in batches or continuous. For many purposes, batches are preferred so that the composition can be checked before the next operation. On the other hand, batch operation may require multiple units so that supply of a mixture to subsequent operations is continuous. Batch operations also can be labor intensive, and if tests are indeed made on each batch, productivity can be low.

Nonetheless, batches are common in the food industry, where formulas change often and multiple fl avors may be processed and packaged on the same line.

Many Equipment Choices
Batch tanks are usually cylindrical vessels with dished bottoms, but they may also have fl at or conical bottoms.

Propellers, which have smooth blades twisted to move at an angle through the fl uid, are relatively energy effi cient and appropriate for low-viscosity fl uids. The shaft should be mounted at an angle to the center line of the tank to promote good circulation. Propellers can generate a vortex, which may incorporate air into the fl uid. This is not always desirable.

Propellers can also be mounted through the side of a tank or through the bottom. The advantage in these cases is a shorter shaft which may have less tendency to defl ect, which puts additional strain on the bearings supporting the agitator. However, passing a moving shaft through a tank wall or bottom requires a mechanical seal to prevent leakage. Such seals then require maintenance and may be diffi cult to clean.

Paddle agitators typically have two, four, or more vertical blades, often mounted on a horizontal disk rotated by a vertical shaft. Several paddles can be mounted on the same shaft in large tanks. Paddles do not promote vertical circulation in a tank unless there also are baffl es along the sides.

Turbine agitators have a rotating impeller inside a stationary cage. The clearance between the impeller and the cage can be quite small, leading to very high shear rates. High shear means imposition of considerable energy in a relatively small volume, which is good for breaking up droplets and aggregates of solids, such as starches and gums.

Charles Ross & Son Co., Hauppauge, N.Y. (www.mixers.com), uses the turbine principle in its Solids/Liquid Injection Manifold (SLIM), according to Ken Langhorn, Product Manager, High-Shear Mixers (phone 631-234-0500). In Ross's unit, the rotating impeller creates a low-pressure zone which pulls a powder from a hopper or through a wand into a fl owing liquid stream. The mixer in this case is usually arranged external to a tank through which fl uid is recirculated as a powder (e.g., a gum or starch) is added. Ross makes a wide variety of mixer confi gurations to accommodate different viscosities and provide different levels of shear.

In food applications, it is common to use several mixing devices, such as a slow scraper along the sides and bottom of a shallow tank with a higher-speed agitator elsewhere in the tank to disperse solids. Food mixing tanks may be jacketed for heating and cooling, and the agitation may be primarily intended to promote heat transfer rather than intense mixing.

Food mixers are almost always fabricated from stainless steel to resist corrosion and make cleaning and sanitation easier. Drives are usually electric motors, but for light applications, drives can be pneumatic motors, driven by compressed air. These are especially convenient if fl ammable liquids are present, as is often true for fl avors and essential oils.

Scaling Up
Practical batch sizes for liquid mixing depend on viscosity. An old rule of thumb is 5,000 gal for viscosity of 200,000 cP and 20,000 gal for 100 cP. Emulsifi cation and dispersion occur at a fi nite rate, which may need to be determined experimentally.

Mix time is best expressed as blend number Nt, where N is speed of the agitator and t is time in consistent units. Thus, if speed is in revolutions/min, time is in minutes and the result is dimensionless. This value often correlates with the Reynolds number, ND2ρ/μ, where N again is speed, D is size of the agitator, ρ is fl uid density, and μ is viscosity, all in consistent units.

Experiments in mixing must preserve geometric similarity between scales for correlations to be useful. Often, agitators have a relation to vessel diameter, such as 50%. For good mixing, vessels should be about the same height as their diameter, though other proportions are used. Many foods are non-Newtonian, meaning that their viscosity changes with shear rate. Often, foods are pseudoplastic, which means that their viscosity decreases as shear rate increases. Shear rate roughly correlates with agitator speed. Blending tends to improve with increasing Reynolds number, which also increases with speed.

A particularly useful scale-up parameter is power per unit volume, often expressed as horsepower per gallon (or per 100 gal, to avoid using fractions). Representative values are 2–5 hp/100 gal to disperse solids or make emulsions. Lower values are adequate for dispersing light fl uids or dissolving solids. Higher values, up to 7.5–10 hp/100 gal, are encountered with more-complex mixtures, even up to 100 hp/100 gal for thick pastes and doughs. In continuous mixing systems, the corresponding parameter is horsepower per unit fl ow, such as gallons per minute.

The critical issue in continuous mixing is not usually the mixing but accurate feeding of all the components. This is one reason why a unit like Ross's SLIM is often used in a batch mode—feeding is then less critical and the quality of the batch can be confi rmed. In continuous blending of fl uids, especially for beverages, an in-line refractometer may be used to control one or more fl ows as the mix goes through an in-line agitator or static mixer. (Static mixers have no moving parts. Rather, they contain precise fl ow-diversion elements within a pipe.) Refractometers, however, are notorious for occasional drift in their accuracy as the optical windows get dirty. One of the great needs for continuous fl uid blending is reliable instrumentation.

Mixing of fl uids may be one of the most common unit operations in food processing. Constraints and challenges abound—sanitation, scale-up, consistency, effi ciency, productivity, and maintaining quality, whether that be related to particle identity, fl avor, or mouthfeel. There are many useful technologies—low-cost or expensive, low-shear or high-shear, simple or complex. In the end, a process developer needs a good selection of options in the lab and pilot plant and enough understanding to properly apply them.