Polymerase chain reaction (PCR) represents the state-of-the-art technology in detecting the presence of genetically modified organisms (GMOs) in foods and ingredients. However, "One of the major challenges, when detecting the presence of biotechnology-derived events in grains and oilseeds, is that different labs do not always obtain comparable results when testing identical sample material," says Ron Jenkins, Proficiency Program Manager for the Technical Services Div. of the U.S. Dept. of Agriculture’s Grain Inspection, Packers and Stockyards Administration (www.gipsa.usda.gov). 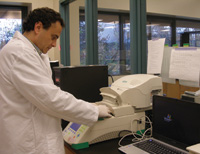 A proficiency testing program was established by GIPSA in February 2002 to improve the overall performance of testing for biotechnology-derived grains and oil seeds. The purpose of this Kansas City, Mo.–based offering is to provide laboratories with a means of assessing their capabilities and improving their overall performance, reproducibility, and reliability. "We want all labs that test for GMOs to get similar quantitative results," Jenkins says.

According to Jenkins, tparticipation in a proficiency testing program allows laboratories to meet ISO 17025 standards, a required criterion to become ISO certified.

"Proficiency testing relative to the detection of GMOs in food source materials such as corn and soy flour is a relatively new analytical endeavor," Jenkins points out. "Deliberations are still ongoing to harmonize methods for sample preparation and extraction, detection, and the use of internationally recognized certified reference materials."

That’s because testing laboratories are using a plethora of DNA extraction procedures, detection chemistries, and reference materials when analyzing for transgenic events in grains. "The lack of standardized methods probably contributes significantly toward the large variation in performance scores in the GIPSA proficiency program," he says.

In light of these variations, Jenkins emphasizes, development of certified reference materials, validating methods for detection of biotechnology-derived events, and participation in a proficiency program all play a crucial role in sustaining globally accurate and reliable testing methods.

Reference Materials & Thresholds
The creation of a GMO variety, also known as a transgenic event, involves the insertion of new genetic information into the host organism, such as corn or soy. The new DNA reprograms the cells of the plant to produce novel proteins that are not normally expressed by the plant. These novel proteins then confer herbicide tolerance or pesticidal properties to the plant. Testing laboratories that do not have reference material cannot test for that particular transgenic event.

"If labs fall dramatically short of proficiency standards, they can reassess their testing methods and make adjustments," Jenkins says. Adjustments might include selecting a different reference material. The Institute for Reference Materials and Measurement (IRMM) develops certified reference materials for transgenic events in grains and oilseeds.

To minimize variation and drifting of the PCR measuring system, homogeneity and stability of the reference materials are crucial.

For approved GM varieties, certain thresholds must be maintained to meet European Union requirements. These thresholds, enforced since April 2004, mandate traceability through documentation and implementation of identity preservation systems and procedures for the entire supply chain. Japan, Korea, China, Australia, New Zealand, and Australia also have mandatory GM labeling requirements. In contrast, the United States currently has no traceability or labeling requirements for GMOs, since they are considered substantially equivalent to the non-transgenic varieties.

For varieties that are unapproved (the list varies from country to country), GMO testing methods (by any established laboratory technique) are needed that are robust, sensitive, accurate, reproducible, reliable and cost effective, Jenkins asserts.

"The EU-specified thresholds for approved events in their marketplace drive the testing," Jenkins says. "If a product tests greater than or equal to 0.9% GMO, it requires labeling. Products testing less than 0.9% GMO are classified as having an adventitious presence and need no label."

Simply stated, a 1% threshold means that there is one GMO kernel in 99 non-GMO kernels. But complications can create murky threshold waters for PCR technology. There can be stacked events, e.g., two different GM events in a single kernel. So does that imply a threshold of 1% or 2%?

Moreover, if there are two piles of corn, with 100 kernels each, one pile can contain one kernel with two different GM events, while the second pile contains two kernels manifesting GM events different from those of the other pile.

"With current technology, PCR cannot distinguish the differences," Jenkins says. "Those types of issues have yet to be resolved."

Complicating matters is that some studies report a 30% or greater variability at the 0.9% threshold level. "Results of such analyses have a direct and influential effect on the global marketing of these food source materials," Jenkins says. "One explanation for this large discrepancy is that small differences in amplification efficiencies between samples become significant differences in results when they are amplified using quantitative (real-time) PCR."

Plugging into Proficiency Testing
Upon request from a testing lab, Jenkins sends a sample of a product containing a known concentration of a particular GMO. The testing lab conducts a blind analysis of the sample and forwards the results to Jenkins. He then provides a copy of the key to the lab so that personnel can compare their results to USDA’s proficiency standard.

"Participation in our program has increased dramatically," Jenkins reports. "When we started four years ago, about 22 labs worldwide participated. Now approximately 120 labs worldwide, both private and government, take advantage of the program." Most labs typically conduct proficiency tests twice a year, Jenkins adds.

"GIPSA will continue to assist independent laboratories that use protein- and DNA-based technologies with impartial verification of their methods, qualitative and quantitative detection of transgenic events in biotechnology-derived crops," Jenkins promises. "Our primary focus will be to identify, develop, evaluate, validate, and improve analytical laboratory methods and rapid instrumental methods for grain quality assessment. Our agency is currently developing validated real-time PCR methods for detecting transgenic events in grains and oilseeds."

Sample testing will increase in the years ahead due to development and approval of more GMOs and implementation of more GMO regulations, predicts Bernd Schoel, Director of Research and Development and Technical Manager of Genetic ID NA, Inc. (www.genetic-id.com). A participant in the GIPSA Proficiency Testing Program, the Fairfield, Iowa–based, ISO 17025–accredited lab tests thousands of samples for GMOs annually.

"Corn flour, corn grain, soybean flakes, and soybean seed constitute the majority of those samples," Schoel says, "but our customers also send a wide variety of products, including whole cheesecakes, baked goods, and even compost."

Several factors affect the ability to detect GMOs, Schoel points out. "With processed foods, like corn chips, the DNA becomes degraded, making it harder to detect, and in the case of a product like a chocolate cake that has multiple ingredients and refined ingredients, the presence of inhibitors can obscure the detection of GMOs. Efficient DNA extraction methods are critical for successful PCR analysis."

To ensure a consistent and reliable report, Genetic ID frequently runs a combination PCR test that examines for the presence of a GMO, the species in which the GMO is contained, and the absence of inhibitions.

Client Education Is Key
"From our standpoint, the specific requirements of our clients and their end users are the drivers for GMO testing," says Dan Wetsch, Operations Supervisor at the GMO Testing Center of Cedar Rapids, Iowa–based Silliker, Inc. (www.silliker.com), another ISO 17025–accredited lab that participates in the GIPSA program.

"We participate because we feel that a third-party verification of our testing program is a vital aspect of our overall quality control system," Wetsch says.

Silliker acquires about 20–25 new clients each year, and Wetsch is responsible for getting all of them up to speed on details like special reporting requests, sample result distribution, technical aspects of PCR, costs, turnaround time, and benefits.

Educating clients is one of the greatest challenges associated with GMO testing, Wetsch says. "Our customers are getting more savvy about the technology, but it’s our responsibility to let them know as much as we can about GMOs and PCR, and help them understand the data that we generate regarding their samples, so they can make sound decisions relative to their testing needs."

PCR Improvements
"PCR will meet industry needs for GMO testing for the foreseeable future," Wetsch says. "However, I expect to see improvements in PCR equipment, including increased throughput and capabilities to run more samples at the same time."

Real-time (quantitative) PCR is the technology that is evolving most rapidly for GMO testing, says Nicolas Roelofs, Group Operations Officer for the Life Science Group of Bio-Rad, a Hercules, Calif.–based company that manufactures PCR equipment and test kits (www.bio-rad.com).

"Laboratory customers’ needs are the driving force behind real-time PCR improvements, including decreased testing time—as little as 30 min—and capabilities to run multiple tests at once on the same product sample," Roelofs says.

Previously, if one wanted to analyze a corn sample for four possible genetic modifications, it was necessary to run four different tests, he points out. "With new instrument developments, it’s now possible to run five different tests at once."

Remarkably, these five tests can include five different GMOs in one species (e.g., corn) or four different GMOs in one species plus a reference test. Five tests can also be run simultaneously for GMOs in multiple species. "Bread can be tested for the presence of GMOs from both corn and soybeans," Roelofs explains. Bio-Rad’s five-test offering in the marketplace is its iQ5 Real-Time PCR Detection System.

According to GIPSA’s Jenkins, the capability to run five tests at once does not resolve the aforementioned threshold issues that have yet to be addressed.

"Once a sample has been ground into a flour and the test sample collected, if you have stacked traits expressed by one kernel, or two individual traits from two kernels, you cannot distinguish whether different transgenic events were derived from one kernel or from individual kernels," Jenkins explains. The only way to identify stacked traits, in a lot, would be to test individual kernels from the lot.

Despite these limitations, real-time PCR is becoming more and more popular for GMO testing, Jenkins observes.

"Real-time PCR should become the dominant technique for GMO testing in the next few years," Roelofs says. "The increased speed of detection, continued evolution of the technology, and decreasing cost of instruments and reagent will drive these changes."

How PCR Works
Simply stated, the universally accepted polymerase chain reaction technique looks for the actual bioengineered sequences that have been inserted into the plant’s naturally occurring DNA.

Specifically, PCR selectively generates copies of an original DNA molecule that serves as a template. A naturally occurring enzyme, polymerase, catalyses the formation and repair of both DNA and RNA. The clever polymerase allows the targeted DNA to be reproduced from small numbers in a given product sample up to detectable levels.

There are two PCR methods, including real-time (quantitative) and conventional, which is qualitative and followed by agarose gel electrophoresis. In a qualitative system, the PCR is performed for a sufficient number of cycles (typically 35–50, the preferred number varying from lab to lab) to obtain maximum formation of replicated molecules. Quantification determines the ratio of target GM DNA to the total of the species DNA.

"While ELISA’s protein detection is sensitive and reliable, it is easier to identify DNA modifications with PCR," notes Bio-Rad’s Nicholas Roelofs. "It’s very difficult to conceive that another technique will replace PCR for GMO testing."

To analyze a food product by PCR either qualitatively or quantitatively, it’s necessary to first procure a solution of the DNA present in the sample. Next, the DNA must be extracted from the solution, then purified to make it suitable to serve as the aforementioned template. After replication, the DNA can be sequenced, which facilitates comparison to the original DNA’s sequence to determine a difference. Using PCR, it typically takes about 2 hr to test a sample for GMOs.

by Linda L. Leake, currently enrolled in the Professional Master of Science in Food Safety Program at Michigan State University, is a freelance journalist based in Wilmington, N.C. ([email protected])