There are billions and billions of incredibly diverse microorganisms within and around us. Putting numbers into perspective, the world’s human population is around 6 billion, and we can probably find the same number of bacteria in just one teaspoon of soil! It should therefore not be surprising that microbial populations influence almost every aspect of human and animal life. They influence the health of humans and animals, the foods we eat, and the deterioration of materials.

Microorganisms never exist as single cells. No matter the location—whether a rock surface, the spaces between the teeth, or a hamburger patty—there is an incredible diversity of bacterial species. To function effectively within these diverse environments, bacterial communities have developed very sophisticated means of sensing their local environment and adapting to changing conditions.

Bacterial populations coordinate their gene expression by producing and responding to a variety of intra- and intercellular signals termed “autoinducers” or AI molecules. This process of coordinating gene expression via the production, release, and sensing of AI molecules by bacteria is known as “quorum sensing.” Over the past decade, new information about the different quorum-sensing systems, the types of AI molecules, the genes influenced by quorum sensing, and their role in food spoilage and safety has been obtained (Waters and Bassler, 2005; Walters and Sperandio, 2006; Lu et al., 2004; Rasch et al., 2005). This article provides a general overview of bacterial quorum sensing and its relevance to food microbiology.

Quorum Sensing
Quorum sensing was first observed and described in the bioluminescent marine bacteria Vibrio fischeri and Vibrio harveyi (Nealson and Hastings, 1979). V. fischeri colonize the light organ of the Hawaiian squid Euprymna scolopes. There they grow to high cell density, produce the AI acyl-homoserine lactone, and induce the expression of genes required for bioluminescence. The squid is able to use the light to avoid predation, while the bacteria are able to proliferate to high numbers within the light organ.

Studies show that microbial processes such as growth, sporulation, toxin production, virulence, antibiotic synthesis, and motility in bacterial cells are coordinated at the gene-expression level by the AI molecules. A variety of diffusible, low-molecular-weight molecules produced during bacterial growth were originally considered “waste” or the products of detoxification. Studies over the past several years have, however, revealed that at least some of these molecules can serve as “signal molecules” or AIs when their concentrations reach a critical level.

Four broad categories of signaling molecules have been reported so far: (1) the fatty acid derivatives of N-acylhomoserine lactones (AHLs) used by Gram-negative bacteria for intraspecies communication (termed AI-1); (2) a furanosyl borate diester molecule (AI-2) and a non-boronated diester molecule (vAI-2) used by Gram-positive and Gram-negative bacteria for intra- and interspecies communication; (3) an AI of currently unknown structure (AI-3), which is involved in cross-talk between Escherichia coli O157:H7 and the host epinephrine cell-signaling system; and (4) peptides and short-chain amino acids used by Gram-positive bacteria such as Bacillus subtilis (Sperandio et al., 2003; Lazazzera, 2001) (Figures 1A, B, and C).

The AHL molecules differ with respect to the length of their side chains (C4 to C16) and with various degrees of substitution and saturation. Short-chain AHLs are freely diffusible over the cell membranes, whereas long-chain AHLs require efflux pumps. The AHLs bind to their receptor proteins to induce gene expression. In some instances, the presence of AHLs can also cause the de-repression of the target gene expression.

Gram-positive bacteria utilize modified oligopeptides as signal molecules. Sporulation in B. subtilis is controlled by three pentapeptides, and short peptides control the production of bacteriocins in lactic acid bacteria. 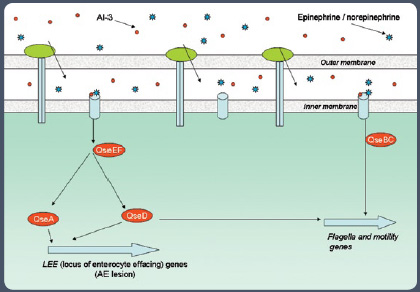 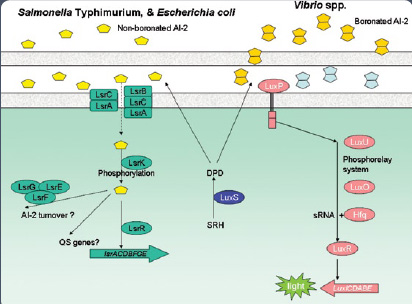 In Gram-negative bacteria such as Pseudomonas aeruginosa, E. coli, and Salmonella, a variety of autoinducers such as AI-1, AI-2, and AI-3 are reported to be involved in controlling gene expression (see Figures 2 and 3 in sidebar). The gene coding for AI-2 is widely distributed among bacteria, and AI-2 has been shown to function across bacterial species and influence the expression of a wide variety of genes. For these reasons, AI-2 is considered to function as a universal signal molecule. 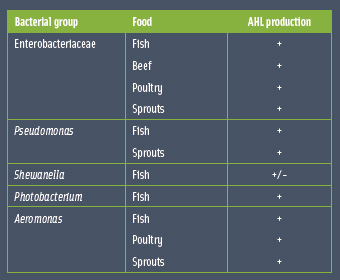 AIs have been found to reduce the lag phase and increase the exponential growth rate of milk-spoilage organisms as well (Dunstall et al., 2005). Although a number of studies highlight the possible role of AHLs in microbial spoilage, very little is known about the temperature stability of these compounds and whether food processing and storage conditions could influence the types, amounts, and bioavailability of AHLs in foods.

• Biofilm Formation. Bacterial biofilms are of concern to human health, since they are responsible for chronic bacterial infections such as cystic fibrosis and dental plaque. They are also of importance to food safety, since they have been observed on vegetable produce and food processing equipment. Biofilms are resistant to antimicrobial agents and disinfectants such as chlorine, making them extremely significant in terms of human health and food safety.

Studies have shown that quorum sensing involving a variety of AI molecules are involved in biofilm formation. Pseudomonas aeruginosa is a prolific biofilm former, and the formation of Pseudomonas biofilms has been shown to be regulated by AHLs. Quorum sensing has been implicated in the formation of biofilms by Burkholderia cepacia, a key pathogen in patients with cystic fibrosis (Riedel et al., 2001). Several bacterial genera that are associated with dental plaque, such as Prevotella intermedia, Fusobacterium nucleatum, and Porphyromonas gingivalis, have been shown to produce AI-2-like activity. Our studies show that AI-2-like activity found on the surface of tomatoes has the potential to enhance the production of bacterial biofilms (Lu et al., 2005).

• Foodborne Pathogens. Since E. coli and Salmonella are exposed to a very diverse microbial environment in the gastrointestinal tract, it is not surprising that they have developed multiple approaches, including quorum sensing, to respond to their environment.

A non-AI-2-based airborne signal has also been reported in E. coli (Heal and Parsons, 2002). Sperandio et al. (2003) suggest that activation by enterohemorrhagic E. coli O157:H7 of genes responsible for intestinal colonization is mediated through two classes of signals: a bacterial aromatic AI (AI-3) produced by the normal GI flora and the epinephrine/norepinephrine produced by the human host.

Although we now know about the various sensing systems of enteric bacterial pathogens in the human host, very little is still known about how these pathogens respond to the signals that may be generated by the food matrix. Cloak et al. (2002) showed that AI-2-like activity is produced by Campylobacter coli, Campylobacter jejuni, S. Typhimurium, and E. coli O157:H7 in milk and chicken broth. Brandl et al. (2005) showed that AI-2 contributes to the “niche-specific benefit” of Salmonella Thompson in chickens but not on cilantro leaf surfaces. Lu et al. (2005) showed that AI-2-like molecules extracted from the surface of tomatoes can induce in-vitro formation of E. coli O157: H7 biofilms.

Laboratory Detection of Autoinducers
The presence of AI activity in bacterial culture filtrates, foods, and other samples is detected by bioassays using specific bacterial strains. Given the diversity of AI molecules, there is an on-going debate as to what the “ideal bioassay” should be for detecting the different classes of AI molecules. Bioassays do not confirm the presence of a particular AI molecule. Rather, they indicate the presence of an AI-like activity.

The different AHL molecules are currently being detected using Agrobacterium tumefaciens NT1 (pZLR4) strain and the Chromobacterium violaceum CV026 strain. The former is used to detect AHLs with medium-to-long acyl side chains and the latter to detect AHLs with short-to-medium acyl side chains. The assay using these strains is based on the formation of a colored zone (blue with the Agrobacterium strain and purple with the Chromobacterium strain) around the colony as an end-point. 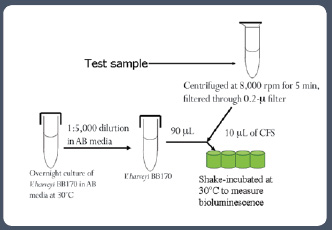 The non-boronated form of AI-2 is detected using S. Typhimurium strain MET844, which possesses a-galactosidase activity as the endpoint detection of the variant form of AI-2.

Quorum-Sensing Inhibitors
Given the concerns surrounding antimicrobials, targeting quorum sensing might be an effective approach against bacterial proliferation and virulence. Compounds that inhibit quorum sensing constitute a new generation of antimicrobial agents with applications in many fields, including human medicine, veterinary medicine, agriculture, food safety, and food spoilage.

Quorum-sensing inhibitors can be developed that are targeted toward inhibiting the synthesis of the AI molecules, inhibiting their dissemination, or inhibiting the sensing of the AI signals. The red alga Delisea pulchra produces several halogenated furanone compounds capable of interfering with AHL-mediated signaling in bacteria by preventing the binding of AHL to its receptor. Halogenated furanones protect black tiger prawns from the pathogen V. harveyi, while synthetic furanones reduce P. aeruginosa infections in clinical studies. Bacterial genera such as Bacillus, Pseudomonas, Klebsiella, and Comamonas possess enzymes capable of AHL destruction. 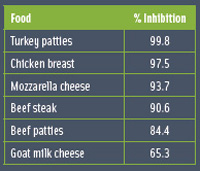 Since quorum sensing is significant as it relates to food-associated organisms, there is an intense search for compounds that could block AI signaling. Rasmussen et al. (2005) screened a number of plant and herb extracts for their quorum-sensing inhibitory activity. Studies in our laboratory suggest that autoinducer-inhibiting compounds can be found in meat products (Table 2).

Compounds, especially those that target AHLs, can influence microbial colonization of meat surfaces, toxin formation, and bacterial proliferation and can find applications as food preservatives. Detailed studies are, however, still needed to completely elucidate the influence of additives, such as preservatives, flavor agents, and colors, on the quorum-sensing mechanisms of spoilage and pathogenic bacteria in foods. Based on the current understanding, it is conceivable that vegetables, fruits, natural and processed foods, and food ingredients can influence microbial gene expression by modulating the concentration and availability of AI molecules.

Future Research Directions
The bacterial quorum-sensing concept is revolutionary because it questions the fundamental view that microbial cells live as single entities and that their response to the environment is driven by primarily chemical and physical stimuli. The previously held view that microbial cells respond as single entities is overly simplistic. Bacterial cells can communicate with each other through autoinducer molecules which function as signaling molecules. Thus, it is logical that if we are to control the proliferation and survival of bacterial communities, we should be developing strategies to interrupt or modulate these communication signals.

Our knowledge about how different foods and their ingredients influence the different spoilage organisms and bacterial pathogens is still very limited from a microbial cell–signaling point of view. Even though there is a growing body of literature on AIs and their inhibitors, significantly more detailed information is needed, especially as it relates to food microbiology.

We need to know whether processed and natural foods contain AIs, AI-like “mimic” compounds, or quorum-sensing inhibitory molecules. We need to have a clear understanding of how these foods and food components influence microbial cell signaling.

Our understanding of autoinducers and quorum sensing is in its infancy, and we predict that in the next 5–10 years we will identify a much larger repertoire of cell-signaling compounds. Some of these compounds may hold the key to preservation of foods and preventing the growth and persistence of pathogens in foods.

Understanding the relationships that exist between the food ingredients, food processing, handling, and food consumption methods, and the cell-signaling-based microbial activity of pathogens and spoilage bacteria is critical. We must attempt to understand these relationships because such understanding can be important in formulating the next generation of foods that are microbiologically safe and have extended shelf life.