It’s been called the "crimson harvest." And you would know why if you ever saw a flooded cranberry bog—the water bright red with the color of berries that have risen to the surface. Set this against a backdrop of autumn foliage and blue sky and you have a work of art showcasing one of North America’s native foods. 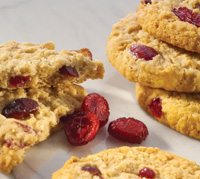 Scenes such as this were viewed during Ocean Spray Cranberries’ 2006 International Harvest Media Event, held in the Cape Cod area of Massachusetts, October 16–19, 2006. Attending the occasion were food writers representing newspapers and magazines from 12 countries, including Food Technology.

The annual tour provides an education on all aspects of cranberry production. Our host, Ocean Spray Cranberries, Inc., Lakeville-Middleboro, Mass. (phone 508-946-1000; www.oceansprayitg.com), is an agricultural cooperative owned by more than 800 cranberry growers from Massachusetts, Wisconsin, New Jersey, Oregon, Washington, British Columbia, and Quebec, as well as 126 Florida grapefruit growers. Founded in 1930, the group satisfies 70% of the global demand for cranberries. In a crop year, it can handle more than 480 million lb of fruit, and that number is expected to increase.

The North American cranberry (Vaccinium macrocarpon) is recognized for its bright red appearance, tangy taste, versatility, and association with a growing number of potential health benefits. It is a cousin to the blueberry, also native to North America. Named after the crane shape of its blossoms, cranberries are a perennial crop, growing on low, woody vines that thrive in acidic soils, not in water, as is popularly believed. The berry contains a combination of acids with little water or sugar.

Now, put on your "waders" and follow me into the bog.

Harvesting
After cranberries bloom in the late spring, the fruit turns from green to white (yellowish) to bright red throughout the growing season. White cranberries, which are fully mature but have a lighter taste than the red berries, are harvested in the second week of August before cool nights can bring out their red color. The red cranberries are harvested from mid-September to early November.

Today’s growers employ two methods of harvesting:
In dry harvesting, berries are "combed" off the vines by lawn mower-like machines and sent to a sorting facility where they are subjected to a "bounce" test. Berries that bounce down a series of wooden boards are considered ripe and firm and are marketed as fresh, to be sold in produce sections and used for cooking and baking. Bad bouncers find application in processed foods. About 5% of the cranberries grown in Massachusetts are dry harvested.

In wet harvesting, the field is flooded with up to 18 inches of water, and water reels or "egg beaters" are used to loosen the berries from the vines. The freed berries float to the surface where they are corralled and pumped through a suction hose into waiting trucks. They are then taken to central receiving stations for sorting and inspection, and used as ingredients. In Massachusetts, 95% of the berries are wet harvested.

Processing
Cranberries are processed into many different forms, including frozen, concentrates, powders, purees, and sweetened dried cranberries. Cranberry ingredients are highly versatile, easily blended with other fruits, and extremely stable during and after processing.

Ocean Spray has 11 manufacturing facilities in the United States. After taking off our waders and drying off a bit from the harvest, we toured the Middleboro manufacturing facility, capable of producing 74 million lb of sweetened dried cranberries (SDC) per year. There, we had the opportunity to see how this particular product is made using a special patented process developed by Ocean Spray.

Our tour guide, Harold Mantius, Senior Principal Process Engineer, worked on developing the process. Frozen cranberries are sliced into very thin strips, which make it easier to extract the juice. The fruit next goes to the counter-current extractor (CCE), an inclined screw which, with the help of a stream of water, takes the juice out of the hull. (The juices will then be further processed through filtration and reverse osmosis and prepared for beverage products.) After the juice is removed, the hulls are conveyed to the counter current infusion system, an inclined screw which infuses them with a syrup made of sugar, water, concentrate, and other ingredients. The syrup is necessary to make the tart product palatable. The infused hulls go through multiple stages of drying and sunflower oil is applied to help process them. A dicing operation takes the finished product and cuts it into various sizes and shapes. The resulting product may be used by food processors in such applications as cereals or bars, or it may be packaged for the retail market under the name Craisins®.

By 2007, it is estimated that Ocean Spray’s manufacturing facilities will be capable of producing a total of 74 million lb of SDC and by 2009, that number is expected to increase to more than 100 million lb.

Ingredient Developments
Ocean Spray has two divisions: one for its juices, sauces, and foods, and the other for the development of its ingredients. This second division, the Ingredient Technology Group, is a product development resource for companies and organizations, working as a strategic partner with customers to create specific recipes and increase market share through the application of technology.

The group’s patented technologies have been used to create a large portfolio of fruit ingredients, which are available year-round for the bakery, confectionery, dairy, cereal, snack, and nutritional industries. We met with the division—represented by Marion Burton, Associate Marketing Manager, and Kristen Girard, Principal Food Scientist—to discuss the most recent ingredient developments.

A natural juice SDC was recently introduced which contains no added sugar. The ingredient is sweetened by pineapple juice, which gives it a mild flavor and extends its shelf life. Like its original counterpart, it retains its shape and color throughout manufacturing without color bleeding or loss of moisture.

A reduced-sugar, high-fiber SDC is currently in development. Compared to the original version, it has 50% less sugar, 20% fewer calories, and is a source of fiber. It contains cranberries, sugar, polydextrose, maltodextrin, glycerine, natural flavor, and sunflower oil.

BerryFusions™ Fruits is a line of flavored fruit pieces that combine SDC with natural fruit flavors such as blueberry, strawberry, cherry, orange, raspberry, mixed berry, and mango. The easy-to-use, cost-effective ingredient has high processing tolerance, delivering flavor and texture to bagels, cookies, and other applications. The newest addition to the range is glycerated apple cinnamon, which may be used in cereals, trail mixes, and other lower-water activity products.

Not Just for Thanksgiving
Traditionally, Americans associate cranberries with Thanksgiving, eating more than 80 million lb of the food during this holiday week. However, that perception may be evolving as cranberries find increasing use in a variety of popular foods and beverages.

For example, cranberries can be used as a flavor in bottled water; as a puree in smoothies; and as a flavor twist in carbonated beverages such as ginger ale or lemon-lime. They can also be used as toppings for salads and potatoes; as inclusions for chocolate, breads and baked goods, pancake mixes, and stuffing; as a spicy condiment in combination with chiles; and as an ingredient in healthful snacks such as cereal bars and trail mixes. They are also expected to find increasing use in dairy products, ranging from yogurts to cheeses.

In addition, researchers continue to focus on the health value of cranberries in a number of areas including urinary tract, stomach, heart, lungs, and dental. Emerging studies are particularly looking at the ability of cranberries to prevent harmful bacteria from adhering to the body’s cells. This anti-adhesion property can, for example, reduce bacteria in the mouth, potentially slowing the development of plaque and cavities. If so, then cranberries may find use in chewing gum, as well as toothpaste, mouthwash, and dental floss.

Combine this anti-adhesion property with cranberry’s antioxidant potential, and some interesting nutraceutical applications can result. Extracts are being produced using the whole berry, and it is possible that certain components of the berry may be isolated and further developed.

So, this holiday enjoy that cranberry sauce, but also keep in mind that this berry’s potential—from both functionality and health perspectives—is still rising to the surface.