Drying is a mature unit operation in many areas of processing, including foods. It may be one of the earliest methods of food preservation discovered. In addition to preserving foods from spoiling by reducing water activity to levels at which harmful microorganisms cannot grow, drying can significantly alter the physical properties of foods, including weight, volume, color, texture, and flavor. Some of these alterations may be desirable, while others are not. It is usually a goal of a drying process to minimize the harmful changes while also minimizing costs. 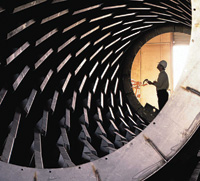 Costs arise from the capital cost of the equipment, the energy used to remove water and to circulate the drying medium (usually air), and losses of the raw material. Other costs include labor, primarily for material handling, and sanitation. Generally, the lowest capital cost occurs for relatively simple tray or belt dryers, while the higher-quality products are produced by somewhat more complex and more expensive types of dryers, such as puff or freeze dryers.

There are numerous types of dryers and their applications (see table), and in addition to the distinctions suggested by the various names, dryers can differ in how energy is applied, water is removed, feed and product are handled, and the drying rate achieved. Typically, operating costs are reduced as drying rate is increased (i.e., residence time is reduced), but there often are limits on the degree to which drying rate can be increased.

Drying Mechanisms
Drying is a case of simultaneous heat and mass transfer, coupled by the relationship between temperature and vapor pressure for the material being removed, usually water from foods. There are four transport steps, any one of which can control the drying rate:
• External heat transfer from an energy source to the surface of the piece being dried.

• Internal heat transfer from the surface of the piece to the location of "free" water.

• Internal mass transfer of water vapor through the dried layer of solid.

• External mass transfer from the surface to a sink for moisture.

At the beginning of drying, water is near the surface, so internal resistances are small and the external transfers dominate. As drying proceeds, the internal resistances become more important and, typically, the drying rate decreases. Empirically, it is often observed that the drying rate (slope of the curve) stays constant (i.e., weight vs time is a straight line) until a certain moisture content is reached, then decreases. The moisture content at which the change seems to occur is called the critical moisture content and is characteristic of the material, the dryer, and the conditions.

In trying to mathematically model drying, a different equation is needed before and after the critical moisture content. For simple geometries (slab, cylinder, sphere), the drying time is proportional to the square of the characteristic dimension—half thickness for slab, radius for cylinder or sphere. This results from modeling the internal mass transfer as diffusion of water vapor through a porous solid.

Since the solutions of the theoretical equations for heat transfer and mass transfer are quite similar, differing only in the respective driving forces and coefficients, the same conclusion results from modeling the internal heat transfer. Singh (2001) gives the detailed equations. The practical consequence is that small particles dry much faster than large ones, which is why fruits and vegetables to be dried are often sliced very thin in at least one dimension. Powders, granules, and crystals can be dried quickly in fluid bed dryers or flash dryers because of their small size.

The fact that much of the drying of many foods is controlled by internal resistance to heat and mass transfer means that little is gained by excessive air velocities or very high temperatures. Air velocity is usually limited by the risk of blowing light product away. Temperatures are usually limited by scorching or color development. Air circulation is usually dictated by the heat requirements of drying rather than by the moisture-carrying ability of the air, so it is often practical to recirculate warm air with some reheating to save energy, as compared with once-through discharge of the hot and moist air.

In many dryers, air is heated by direct combustion of natural gas, which is used because it burns cleaner than other fuels. Some dryers, such as tray or cabinet dryers and freeze dryers, may heat product by circulating steam or hot fluid through hollow shelves. Flow of hot air can be cocurrent, through the product, or countercurrent. Some air must be exhausted to remove moisture. It is usually necessary to ensure that the air that is discharged is above the temperature of its saturation point so that there is no condensation on the product or in the exhaust stack.

Drying Equipment
There are many vendors of drying equipment. Some have relatively standard designs, while others provide more proprietary types. In recent years, some of the previously independent suppliers have consolidated into fewer companies. Tom Barber, Regional Director for food and feed in North and South America for Aeroglide, Raleigh, NC (phone 919-851-2000) gave the following history of the industry and described some of the differences among brands.

Many current brands of dryers, especially belt conveyor dryers, he said, are descended from C.G. Sargent, which began by making textile dryers in New England. Proctor & Schwartz, now combined with Wolverine, and National, now part of Aeroglide, were formed by former employees of Sargent. Early users of large belt conveyor dryers were heavy industry, such as rubber, and textiles. Aeroglide started in the 1940s to build equipment for drying grains and potatoes. National moved into fruits, vegetables, and cereals. FEC in 1960 was descended from Buhler and made equipment for pasta and cereal and is now part of Aeroglide. Wolverine offers an impingement dryer often used for toasting cereal. Wolverine and Proctor & Schwartz were combined and recently were purchased by California Pellet Mill, according to Barber.

Among the dryers offered by the various suppliers, probably the big distinction between industrial and food dryers is that food dryers are typically constructed of stainless steel. The fit, finish, and accessibility of a food dryer might also be different. Barber mentioned that one of the more common challenges of food drying is the stickiness of the material. It is not uncommon for food pieces subjected to elevated temperatures to exude sugars and juices. Some materials, such as cereals, can be coated with sugars before drying. Preventing lumping and removing the product from the belt can be difficult.

Belt conveyor dryers can be single-pass or multi-pass, meaning that after traveling the length of the tunnel, the product falls to one or more return belts. Belts may be perforated or solid. Chambers may have multiple temperature zones. Air flow can be regulated by dampers. Modern dryers have sophisticated controls to maintain conditions. Some suppliers try to offer relatively standard models, says Barber, but Aeroglide prefers to customize each unit, believing that while there can be many options, there is usually one optimal solution.

An interesting drying development is Refractance Window® drying offered by MCD Technologies, Inc., Tacoma, Wash., according to Karin Bolland, President (phone 253-476-0968). Moist product to be dried is placed on the upper surface of the dryer’s conveyor belt, a thin sheet of transparent plastic floating on the surface of almost boiling water. Heat from this circulating hot water is conducted to the belt and then into the moist product to be dried. Additionally, because of the equipment’s patented principle of operation, infrared energy in the water is transmitted directly through the plastic into the moist product to be dried, accelerating this gentle drying process.

As product dries, the conveyor belt/wet product interface (the "refractance window") closes, automatically slowing the drying process and causing most of the infrared energy to be bent back into the water. This leaves only conducted heat as the drying means, which protects product by preventing color and flavor degradation, says Bolland. This drying process, while maintaining product temperatures far below the temperature of the circulating water beneath the conveyor belt, also protects products from oxidation.