Because toxigenic fungi are ubiquitous, mold infestation of susceptible agricultural products such as cereal grains, nuts, and fruits is common in food supplies worldwide. Thousands of mycotoxins exist, but only a few present significant food safety challenges. 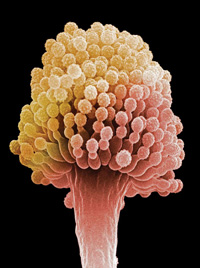 Mold growth can result in reduced crop yields and reduced livestock productivity. Mycotoxins—the toxins produced by molds—also present challenges for analytical detection and destruction via conventional food processing, because they are typically highly resistant. They can also be a hurdle to international trade, with increased regulation of foods and feeds and market removal of commodities not meeting regulatory limits.

The fungal flora naturally associated with foods is dominated by Aspergillus, Fusarium, and Penicillium species, which, except for Fusarium spp., may include commensals as well as pathogens. Fungi have traditionally been identified on the basis of taxonomic characteristics but more recently are classified through genotyping involving nucleic acid sequencing. The effects of their toxic secondary metabolites, when contaminating foods in sufficiently high levels, range from acute to chronic, mutagenic, and teratogenic. Symptoms of mycotoxicoses range from skin irritation to immunosuppression, birth defects, neurotoxicity, and death (ICMSF, 1996).

The Mycotoxins
Among the mycotoxins that affect not only food production but also food manufacturing are the following.
• Patulin. Produced by Penicillium, Aspergillus, and other genera, patulin most commonly infects non-intact apricots, grapes, peaches, pears, apples, olives, cereals, and low-acid fruit juices (notably apple, grape and pear; Sewram et al., 2000; Speijers, 2004). Apple juice has historically been a high concern for contamination, and the focus of many investigations of toxin stability during processing.

• Ochratoxin. This mycotoxin occurs in a large variety of foods because it is produced by several strains of Penicillium and Aspergillus spp. that have varying physiologies and ecologies. Ochratoxin A, the main toxin in this group, is found in infected wheat, corn, and oats, and cheese and meat products of animals consuming ochratoxin-contaminated grains (Aish et al., 2004). Although the toxin is reported to occur in foods around the world, the main regions of concern are Europe and, for some foods, Africa.

The impact of processing on ochratoxin A–contaminated foods is not very well understood.

Because of the large variety of food matrices in which ochratoxin is found, there is no universally suitable method of analysis. Analysis is typically accomplished by high-performance liquid chromatography; liquid chromatography−mass spectrometry is an important secondary confirmation technique.

• Zearalenone. A mycoestrogen, zearalenone has attracted recent attention because of concerns that environmental estrogens have the potential to disrupt sex steroid hormone functions. Genotoxicity is a reported concern. Occasional outbreaks of zearalenone mycotoxicosis in livestock are known to cause infertility. This toxin is found almost entirely in grains, in highly variable amounts ranging from a few nanograms/gram to thousands of ng/g. 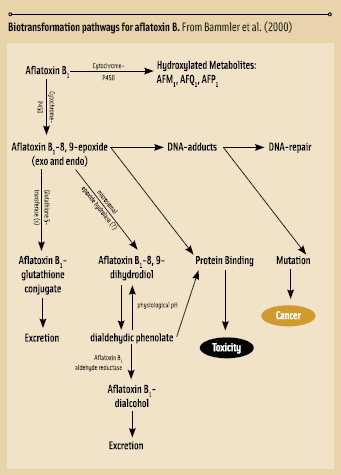 • Aflatoxins. These mycotoxins occur in several chemical forms, designated aflatoxin B1, B2, G1, G2, and M1. The “B” and “G” designations refer to the blue or green fluorescence observed upon exposure of the toxin to ultraviolet radiation. M1 is the predominant metabolite of aflatoxin B1 (AFB1) in milk from lactating humans and animals consuming AFB1-contaminated food or feed.

Aflatoxins may contaminate many crops, including peanuts, corn, cottonseed, Brazil nuts, pistachios, spices, copra (dried coconut), and figs. Contamination may be widespread in hot and humid regions of the world, such as Africa and some parts of China. Human aflatoxicoses continue to be an occasional, serious problem. Some food processing methods can reduce or eliminate aflatoxins. There are reports of reformation or reactivation of aflatoxins post-process.

Simultaneous hepatitis B and AFB1 infections commonly occur in regions with high rates of hepatocellular carcinoma (HCC). Combination of hepatitis B and AFB1 exposure increased relative risk for HCC to 59 (Qian et al., 1994); thus, AFB1 is an independent and possibly strongly potentiating factor for human HCC.

• Trichothecenes. Approximately 180 trichothecenes are known to exist; only a few, of which deoxynivalenol (DON) is the most prevalent, are significant to human health. The related 3-acetyl DON, T-2 toxin, and nivalenol also occur with some regularity, however. Although human DON exposure may be within the range of doses shown to be immunotoxic in rodents, human exposures and responses to this toxin are ill-defined and more work is needed to define the human risk associated with this contaminant. Current food processing techniques do not significantly reduce or detoxify DON.

Two AOAC® Official Methods—thin-layer and gas chromatography assays—exist for DON quantification (AOAC, 1995). High-performance liquid chromatography methods have been peer-reviewed (Trucksess et al., 1998) but are not yet approved by AOAC International. Despite the availability of approved methods, variability in sampling and testing procedures presents difficulties for precise determinations. Inexpensive, rapid assays for DON are not standardized or widely available. Because prevention of DON contamination seems highly unlikely and detoxification methods are far from practical at this point, DON detection deserves greater attention within the food science community.

• Fumonisins. These mycotoxins are produced by the maize pathogens Fusarium verticillioides and Fusarium proliferatum, and, at very low levels, by Alternaria in black end stem rot in tomatoes (Chen et al., 1992), asparagus, and garlic (Seefelder et al., 2002). At least 15 related fumonisin compounds have been identified. Fumonisins are highly water-soluble and are unlike other mycotoxins because they do not have an aromatic structure or a unique chromophore for easy analytical detection. Fumonisins are associated with increased incidence of esophageal cancers in South Africa and China (IARC, 1993) and may be a risk factor in neural-tube and related birth defects (Marasas et al., 2004).

Maize-containing foods are the major fumonisin concern for the food industry. Fumonisin levels in U.S. corn were relatively high between 1988 and 1991, but have been low (<0.5 μg/g) in recent years. There are a few reports of high fumonisin levels (up to 150 μg/g) in home-grown corn consumed in China and South Africa. Most commercial foods, however, contain 500 ng/g or less due to low fumonisin levels in corn and ingredient quality control (Shephard et al., 1996). Fumonisins are extremely stable to a variety of heat/chemical processing operations.

Harvesting control strategies include use of functional equipment and clean and dry collection/transportation equipment, and appropriate environmental conditions (low moisture and full maturity).

Post-harvest measures include use of drying, as dictated by moisture content of the harvested grain, appropriate storage conditions, and dry transport vehicles free of visible fungal growth (CAC, 2003; Quillien, 2002).

These precautions alone, however, do not solve the problem—integration into Hazard Analysis Critical Control Point (HACCP) programs is also important (Lopez-Garcia et al., 1999).

• HACCP. Pre-harvest HACCP programs have been documented to control aflatoxin in corn and coconuts in Southeast Asia, peanuts and peanut products in Africa, nuts in West Africa, and patulin in apple juice and pistachio nuts in South America (FAO/IAEA, 2001). Aldred and Magan (2004) outlined a number of HACCP schemes for wheat-based commodities, and Lopez-Garcia et al. (1999) provided guidance for an integrated mycotoxin management program. Post-harvest control of mycotoxins has been addressed via approved supplier schemes.

• Biological Control Measures. The potential for using microorganisms to detoxify mycotoxins shows promise. Exposure of DON to microbes contained in the contents of the large intestines of chickens resulted in complete transformation in vitro to de-epoxy-DON (He et al., 1992), which is 24 times less toxic than DON (Eriksen, 2003). Similar findings were demonstrated with the microflora of cow intestines (Binder et al., 1998).

• Transgenic Approaches. Traditional grain-breeding strategies to select for preferred genetic traits have shown limited success and are plagued by many hurdles, including inconsistent, labor-intensive inoculation techniques, lack of single genes and resistant control genotypes, and the financial implications of evaluating results (Munkvold, 2003).

Genetic modification of mold-susceptible plants via a number of transgenic approaches holds great promise (Duvick, 2001; Karlovsky, 1999; Munkvold, 2003). One approach involves increasing production of compounds such as antifungal proteins or secondary metabolites that reduce infection by the microorganism. This may be accomplished by introducing a novel gene to express the target compound. Another option is to enhance expression of such a compound by the existing gene, capitalizing on the plant’s own defense mechanisms.

Alternatively, methods to increase production of enzymes that degrade mycotoxins are also being pursued. Efforts are also underway to engineer plants to produce compounds that disrupt mycotoxin synthesis. And Bacillus thermophilus (Bt) genes have been used in corn, wheat, and other cereal grains to minimize insect damage through increased resistance (Munkvold, 2003). This approach is not a long-term solution, however, because Fusarium spp. can enter the kernels regardless of insect injury, and this approach does not control aflatoxin production.

Food Safety Implications
Given the variability in mycotoxin contamination and potential for emergence of novel mycotoxicoses, the prospects for significant human mycotoxicoses are likely, especially in low-income countries where surveillance is less available. In view of ongoing epidemics of immunosuppressive diseases, including HIV infection and chronic protein calorie malnutrition, the additional immunosuppression that may stem from mycotoxins deserves more attention. Very little is known about the effects of long-term, low-level exposure, especially regarding co-contamination by multiple mycotoxins.

Also, due to the heterogeneity of mycotoxin contamination and potential for elevated toxin levels in regional hot spots, consistent sampling and analysis is difficult (Lopez-Garcia et al., 1999). Thus, development of low-tech, inexpensive methods subsequently made widely available for mycotoxin surveillance is a world health imperative. With several novel approaches being developed, such as molecular imprint polymers (Weiss et al., 2003), immunoassays (De Saeger et al., 2002), and bioassays (Widestrand et al., 2003), adoption of such methods is within reach.

Prevention of mycotoxin contamination of human foods could have a significant effect on public health in low-income countries, and deserves significant attention. The food industry should take the lead in these efforts because such action will improve economic sustainability of the industry, enhance food safety efforts, enhance international trade, and improve public health.

CAC. 2003. Code of practice for the prevention and reduction of mycotoxin contamination in cereals, including annexes on ochratoxin A, zearalenone, fumonisins and tricothecenes. Codex Alimentarius Commission. CAC/RCP 51-2003. www.codexalimentarius.net/web/standard_list.do?lang=en.

IARC. 1993. Toxins derived from Fusarium moniliforme: Fumonisins B1, B2 and Fusarin C: Monograph on the evaluation of carcinogenic risk to humans. 56: 445-466. Intl. Agency for Research on Cancer.

Karlovsky, P. 1999. Biological detoxification of fungal toxins and its use in plant breeding, feed and food production. Nat. Toxins 7: 1-23.