At one-billionth of a meter, a nanometer is miniscule—much too small for the human eye to see. And for most humans, anything measuring 100 nm or less may be impossible to comprehend as significant. For this reason, it would seem illogical that structures measuring 1–100 nm would not only exist but would also have implications and applications that could be essential to humankind.

Nonetheless, scientists have embarked on a field of science that could literally fit on a person’s fingernail: nanotechnology. A derivative of chemistry, engineering, physics, and microfabrication techniques, nanotechnology involves manipulating matter at the nanoscale level. It is responsible for determining not only that biological and nonbiological structures measuring less than 100 nm exist but also that they have unique and novel functional applications. In fact, the National Nanotechnology Initiative (NNI, 2006) defines nanotechnology as “the understanding and control of matter at dimensions of roughly 1 to 100 nanometers, where unique phenomena enable novel applications.”

Because applications with structural features on the nanoscale level have physical, chemical, and biological properties that are substantially different from their macroscopic counterparts, nanotechnology can be beneficial on various levels. Research in biology, chemistry, engineering, and physics drives the development and exploration of the nanotechnology field. Consequently, certain industries such as microelectronics, aerospace, and pharmaceuticals have already begun manufacturing commercial products of nanoscale size. Even though the food industry is just beginning to explore its applications, nanotechnology exhibits great potential.

Food undergoes a variety of postharvest and processing-induced modifications that affect its biological and biochemical makeup, so nanotechnology developments in the fields of biology and biochemistry could eventually also influence the food industry. Ideally, systems with structural features in the nanometer-length range could affect aspects from food safety to molecular synthesis (Chen et al., 2006).

A new Scientific Status Summary issued by the Institute of Food Technologists covers some of the developments in nanotechnology and their applicability to food systems. Written by Jochen Weiss, Paul Takhistov, and D. Julian McClements, the Summary, “Functional Materials in Food Nanotechnology,” presents some of the nanoscale-sized structures that are uniquely relevant to the food industry, the different food-manufacturing techniques that could benefit from nanotechnology, and nanotechnology’s applicability to the formulation and storage of food. This article presents a synopsis of the Scientific Status Summary.

Potential Food Applications
All organisms represent a consolidation of various nanoscale-size objects. Atoms and molecules combine to form dynamic structures and systems that are the building blocks of every organism’s existence. For humans, cell membranes, hormones, and DNA are examples of vital structures that measure in the nanometer range. In fact, every living organism on earth exists because of the presence and interaction of various nanostructures. Even food molecules such as carbohydrates, proteins, and fats are the results of nanoscale-level mergers between sugars, amino acids, and fatty acids.

As it applies to the food industry, nanotechnology involves using biological molecules such as sugars or proteins as target-recognition groups for nanostructures that could be used, for example, as biosensors on foods (Charych et al., 1996). Such biosensors could serve as detectors of food pathogens and other contaminants and as devices to track food products. Nanotechnology may also be useful in encapsulation systems for protection against environmental factors. In addition, it can be used in the design of food ingredients such as flavors and antioxidants (Imafidon and Spanier, 1994). The goal is to improve the functionality of such ingredients while minimizing their concentration. As the infusion of novel ingredients into foods gains popularity (Haruyama, 2003), greater exploration of delivery and controlled-release systems for nutraceuticals will occur (Lawrence and Rees, 2000).

Although nanotechnology can potentially be useful in all areas of food production and processing, many of the methods are either too expensive or too impractical to implement on a commercial scale. For this reason, nanoscale techniques are most cost-effective in the following areas of the food industry: development of new functional materials, food formulations, food processing at microscale and nanoscale levels, product development, and storage. The Scientific Status Summary focuses on the nanoscale applications within these areas that have a greater chance of commercial viability now and in the near future.

Nanodispersions and Nanocapsules
As the fundamental components of foods, functional ingredients such as vitamins, antimicrobials, antioxidants, flavorings, and preservatives come in various molecular and physical forms. Because they are rarely used in their purest form, functional ingredients are usually part of a delivery system.

A delivery system has numerous functions, only one of which is to transport a functional ingredient to its desired site. Besides being compatible with food product attributes such as taste, texture, and shelf life, other functions of a delivery system include protecting an ingredient from chemical or biological degradation, such as oxidation, and controlling the functional ingredient’s rate of release under specific environmental conditions. Because they can effectively perform all these tasks, nanodispersions and nanocapsules are ideal mechanisms for delivery of functional ingredients. These types of nanostructures include association colloids, nanoemulsions, and biopolymeric nanoparticles.

Used for many years to deliver polar, nonpolar, and amphiphilic functional ingredients (Golding and Sein, 2004; Garti et al., 2004, 2005; Flanagan and Singh, 2006), association colloids range in size from 5 nm to 100 nm and are usually transparent solutions. The major disadvantages to association colloids are that they may compromise the flavor of the ingredients and can spontaneously dissociate if diluted. 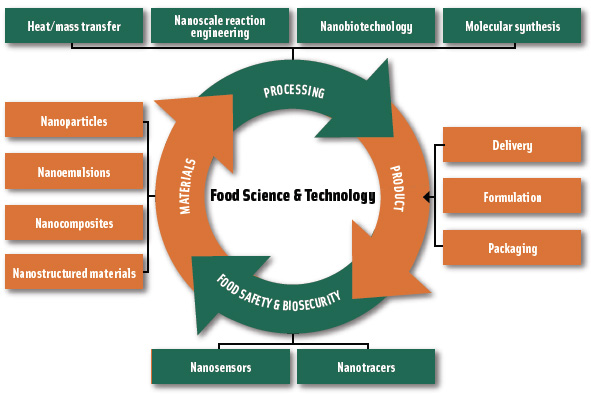 • Nanoemulsions. An emulsion is a mixture of two or more liquids (such as oil and water) that do not easily combine. Therefore, a nanoemulsion is an emulsion in which the diameters of the dispersed droplets measure 500 nm or less. Nanoemulsions can encapsulate functional ingredients within their droplets, which can facilitate a reduction in chemical degradation (McClements and Decker, 2000). In fact, different types of nanoemulsions with more-complex properties—such as nanostructured multiple emulsions or nanostructured multilayer emulsions—offer multiple encapsulating abilities from a single delivery system that can carry several functional components. In structures such as these, a functional component encased within one component of a multiple emulsion system could be released in response to a specific environmental trigger.

• Biopolymeric Nanoparticles. Food-grade biopolymers such as proteins or polysaccharides can be used to produce nanometer-sized particles (Chang and Chen, 2005; Gupta and Gupta, 2005; Ritzoulis et al., 2005). Using aggregative (net attraction) or segregative (net repulsion) interactions, a single biopolymer separates into smaller nanoparticles. The nanoparticles can then be used to encapsulate functional ingredients and release them in response to distinct environmental triggers.

One of the most common components of many biodegradable biopolymeric nanoparticles is polylactic acid (PLA). Widely available from a number of manufacturers, PLA is often used to encapsulate and deliver drugs, vaccines, and proteins, but it has limitations: it is quickly removed from the bloodstream, remaining isolated in the liver and kidneys. Because its purpose as a nanoparticle is to deliver active components to other areas of the body, PLA needs an associative compound such as polyethylene glycol to be successful in this regard (Riley et al., 1999).

Nanolaminates
Besides nanodispersions and nanocapsules, another nanoscale technique is commercially viable for the food industry: nanolaminates. Consisting of two or more layers of material with nanometer dimensions, a nanolaminate is an extremely thin food-grade film (1–100 nm/ layer) that has physically bonded or chemically bonded dimensions.

Because of its advantages in the preparation of edible films, a nanolaminate has a number of important food-industry applications. Edible films are present on a wide variety of foods: fruits, vegetables, meats, chocolate, candies, baked goods, and French fries (Morillon, 2002; Cagri et al., 2004; Cha and Chinnan, 2004; Rhim, 2004). Such films protect foods from moisture, lipids, and gases, or they can improve the textural properties of foods and serve as carriers of colors, flavors, antioxidants, nutrients, and anti-microbials.

Currently, edible nanolaminates are constructed from polysaccharides, proteins, and lipids. Although polysaccharide- and protein-based films are good barriers against oxygen and carbon dioxide, they are poor at protecting against moisture. On the other hand, lipid-based nanolaminates are good at protecting food from moisture, but they offer limited resistance to gases and have poor mechanical strength (Park, 1999). Because neither polysaccharides, proteins, or lipids provide all of the desired properties in an edible coating, researchers are trying to identify additives that can improve them, such as polyols. For now, coating foods with nanolaminates involves either dipping them into a series of solutions containing substances that would adsorb to a food’s surface or spraying substances onto the food surface (McClements et al., 2005).

While there are various methods that can cause adsorption, it is commonly a result of an electrostatic attraction between substances that have opposite charges. The degree of a substance’s adsorption depends on the nature of the food’s surface as well as the nature of the adsorbing substance. Different adsorbing substances can constitute different layers of a nanolaminate; examples are polyelectrolytes (proteins and polysaccharides), charged lipids, and colloidal particles. Consequently, different nanolaminates could include various functional agents such as antimicrobials, anti-browning agents, antioxidants, enzymes, flavors, and colors.

Produced by a manufacturing technique using electrostatic force, nanofibers have small diameters ranging in size from 10 nm to 1,000 nm, which makes them ideal for serving as a platform for bacterial cultures. In addition, nanofibers could also serve as the structural matrix for artificial foods and environmentally friendly food-packaging material. As advances continue in the area of producing nanofibers from food-grade materials, their use will likely increase.

As with nanofibers, the use of nanotubes has predominantly been for non-food applications. Carbon nanotubes are popularly used as low-resistance conductors and catalytic reaction vessels. Under appropriate environmental conditions, however, certain globular milk proteins can self-assemble into similarly structured nanotubes (Graveland-Bikker and de Kruif, 2005, 2006; Graveland-Bikker et al., 2006a, b).

Regulations
In the United States, no special regulations exist for the use of nanotechnology in the food industry. In contrast, the European Union has recommended special regulations that have yet to be accepted and enforced. The Food and Drug Administration says that it regulates “products, not technologies.” Nevertheless, FDA expects that many products of nanotechnology will come under the jurisdiction of many of its centers; thus, the Office of Combination Products will likely absorb any relevant responsibilities.

Because FDA regulates on a product-by-product basis, it emphasizes that many products that are already under regulation contain particles in the nanoscale range. Accordingly, “particle size is not the issue,” and any new materials will be subjected to the customary battery of safety tests. 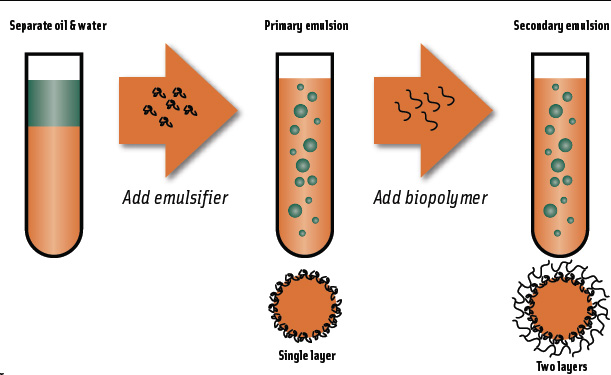 The Institute of Food Science and Technology, a United Kingdom–based independent professional body for food scientists and technologists, has a different view of nanotechnology. In its report (IFST, 2006), the organization says that size matters and recommends that nanoparticles be treated as potentially harmful until testing proves otherwise. Still, it is the European Commission’s intention to apply existing food laws to food products using nanotechnology. Consequently, the European Commission says that the technology will likely require some modification for it to adhere to existing laws.

Commissioned by the UK to assess the potential effects of nanotechnology, the Royal Society and the Royal Academy of Engineering recommend indicating nanoparticles in the lists of ingredients. The UK government agrees that the inclusion of nanoparticles on ingredient labels is necessary for consumers to make informed decisions; thus, updated ingredient labeling requirements will be necessary. The UK government plans to consult with its EU partners to determine whether IFST’s recommendation to scrutinize nanoparticle ingredients for safety is valid.

Increasing Applicability to Food
As developments in nanotechnology continue to emerge, its applicability to the food industry is sure to increase. The success of these advancements will be dependent on consumer acceptance and the exploration of regulatory issues. Food producers and manufacturers could make great strides in food safety by using nanotechnology, and consumers would reap benefits as well. More than 200 companies are conducting research in nanotechnology and its application to food products (IFST, 2006), and as more of its functionalities become evident, the level of interest is certain to increase.