The number of retail products intended to increase energy levels is increasing. From energy shots and powdered mixes to energy drinks and bars, this innovative functional food segment just keeps going and going … . 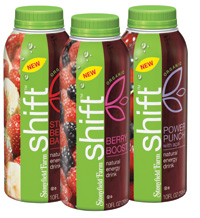 One energy product, Sports Beans™ jelly beans, from Jelly Belly Candy Co., Fairfield, Calif. (phone 800-522-3267, www.sportsbeans.com), was shown to be just as effective as popular sports drinks and gels in maintaining blood sugar levels and improving exercise performance among competitive endurance athletes, according to a press release from the company. The functional confectionery product is formulated with electrolytes, carbohydrates, and vitamins B and C "to sustain and replenish your energy during intense exercise."

Even chocolate is reported to have energy-boosting qualities. A study conducted at Hull and East Yorkshire Hospitals showed that consuming a small amount of dark chocolate each day may help combat the symptoms of chronic fatigue syndrome, according to a press release from the hospitals. Subjects in the study reported feeling significantly less fatigued after eating a daily dose of 45 g of a specially formulated dark chocolate for eight weeks. The chocolate contained 85% cocoa solids and was rich in polyphenol flavonoids.

Here is a closer look at some ingredients that are said to help boost energy levels.

B Vitamins
B vitamins are often used in energy beverages and foods. Several are essential for the breakdown of carbohydrates into glucose, which provides energy, and the breakdown of fats and proteins. Information from Fortitech Inc., Schenectady, N.Y., (phone 800-950-5156, www.fortitech.com), provides insight into why several B vitamins are used in energy-stimulating products.

Vitamin B-1 (thiamine) plays a role in the conversion of blood sugar to energy in the Krebs cycle and is involved in the synthesis of acetylcholine. Vitamin B-2 (riboflavin) is essential for normal growth and development, reproduction, lactation, physical performance, and well-being. It participates in essential biochemical reactions, especially those that yield energy.

Vitamin B-6 (pyridoxine) is a water-soluble B vitamin that functions as a cofactor in more than 100 enzyme reactions. Many of its activities are related to the metabolism of amino acids and other proteins including hemoglobin, serotonin, hormones, and prostaglandins.

Vitamin B-12, an essential growth factor, plays a role in the metabolism of cells, especially those of the gastrointestinal tract, bone marrow, and nervous tissue. Vitamin B-3 (niacin) functions metabolically as a component of two important co-enzymes known as the pyridine nucleotides: nicotinamide adenine dinucleotide (NAD) and nicotinamide adenine dinucleotide phosphate (NADP). These niacin-containing co-enzymes play an essential role in more than 200 chemical reactions in the body.

Vitamin B-5 (pantothenic acid) is involved in the production of some hormones and neurotransmitters and the metabolism of carbohydrates, fats, and proteins.

Guarana is often used in energy-boosting products because it contains caffeine. According to the American Botanical Council, Austin, Tex., (phone 512-926-4900, www.herbalgram.org), Asian (Chinese and Korean) ginseng is renowned for its ability to increase energy and endurance. Eleuthero (Siberian ginseng), a distant relative of true ginsengs, is grown in Siberia, Manchuria, China, and Northern Japan. In Germany, Siberian ginseng is approved for use in a tonic to invigorate and fortify the body during fatigue or weakness and to increase concentration.

"Ginseng has been used for its energy-enhancing benefits in Chinese medicine for 2000 years," says Antoine Dauby, Marketing Manager, Naturex, Inc., South Hackensack, N.J., (phone 201- 440- 5000, www.naturex.com). The company offers GinseniPure® extracts, which are standardized up to 15% ginsenosides. They are also available in a water-soluble form for use in beverages.

Yerba mate is also used to increase energy, Dauby adds. "Originating from South America, yerba mate is a tree cultivated in Paraguay. For centuries, yerba mate has been consumed as a traditional tonic and natural stimulant beverage." Naturex manufactures YerbaLean®, standardized to 2% caffeine and 0.2% theobromine.

D-Ribose
D-ribose, a sugar made by the body, synthesizes many important compounds, including DNA, RNA, and ATP. According to Bioenergy Inc., Minneapolis, Minn., (phone 763-757-0032, www.bioenergy.com), the physiologically functional form of ribose, 5-phosphoribosyl-1-pyrophosphate (PRPP), regulates the metabolic pathway that synthesizes energy compounds in all living tissue. PRPP is required to initiate the metabolic pathway that is used by the body to replenish the energy pool. Supplemental ribose bypasses the slow and rate-limiting Pentose Phosphate Pathway, forms PRPP, and quickly begins the process of energy synthesis. If this compound is not available in sufficient quantity, energy synthesis slows. If the cellular energy pool is depleted by disease or exercise, it must be replaced.

Taurine
Taurine is classified as a conditionally essential amino acid, according to Fortitech. Humans can synthesize it from methionine or cysteine, but under certain conditions some individuals are not able to make enough. Thus, it is an essential nutrient for them. Taurine is an essential nutrient for pre-term and newborn infants because they have not yet developed the enzyme system that allows them to synthesize taurine. Taurine is concentrated in parts of the body that have high electrical activity such as the eye, brain, and heart.

Xenergy, a beverage from Xyience Inc., Las Vegas, Nev. (phone 800-994-3623, www.xyience.com), is formulated with taurine, caffeine, ginseng, and L-carnitine as well as ingredients that support energy, focus, vitality, and endurance. According to the company, taurine has several critical functions and can act, like creatine, to expand cells by helping the muscle cell itself hold more water, thus increasing cell volume. It has been shown to elevate mood, increase energy, and give a positive sense of well-being.

Information on the company’s Web site discussed a Maastricht University study that compared a sports drink containing 4.2 g of PeptoPro and 8.2 g of carbohydrate/100 mL with a "normal" sports drink containing 8.2 g of carbohydrate/100 mL. During a training session of exhausting exercise followed by a 5-hr recovery period, the subjects were given the drink (330 mL) every half hour. This was followed by a second training session. The test drink doubled the production of insulin after exercise and significantly reduced plasma glucose levels, showing that the uptake of the glucose into the muscle was accelerated. The faster the glucose is taken up by the muscle, the faster the muscle produces glycogen.

During the recovery period, blood samples were taken 11 times to measure the concentrations of insulin and glucose. The hydrolysate, PeptoPro, boosted insulin production. As a result, the glucose in the blood was absorbed faster by the muscles, so that their energy reserves were topped up more rapidly.