Solid foods such as spices, herbs, and teas can be contaminated with bacteria, molds, and insects because they are agricultural products and are often grown and harvested under dusty conditions in developing parts of the world. To avoid transmission of plant pests and potential contamination of foods and mixtures in which the materials are used, they are often treated to reduce the microbial load and to kill insects, eggs, and larvae.

Another instance in which solids may require thermal treatment is fresh and ready-to-eat meats, which may have surface contamination by salmonellae or Listeria. Ready-to-eat meats, such as frankfurters or lunch meat, are fully cooked but are subject to post-processing contamination before packaging. Fresh meat, especially chicken, is likely to have Salmonella because it is common among chickens. It is desirable to reduce the microbial load to extend shelf life and to reduce the risk of cross-contamination from people handling raw meat and then contacting other foods.

Many imported spices and herbs are treated by irradiation or by exposure to chemical sterilants, such as ethylene oxide. While these treatments are well accepted in the United States, there can be objections to them in Europe and elsewhere. Also, foods treated by irradiation or chemicals may not be considered "organic." Ethylene oxide is toxic and flammable, so care is required in its application. Irradiation requires special facilities for applying gamma radiation from isotopes or an electron beam, which has limited penetration capability and so requires that the material to be treated be presented in a relatively thin layer.

Thus, there is an opportunity for an alternative treatment that leaves no residue but is effective in reducing microbial and insect contamination. For treating meat, it is desirable to deliver a microbial kill without cooking fresh meat or overcooking ready-to-eat meat. For spices, herbs, and teas, it is important to retain the delicate flavors, color, and essential oils.

Microbes are more vulnerable to wet heat than to dry heat, so live steam is a promising treatment agent. However, many of the foods needing treatment are dry and could be vulnerable to caking or deterioration caused by excess moisture. Some clever techniques have been developed to apply steam to dry materials without causing damage from excessive heating or moisture.

The Safesteril Process
The Safesteril process was developed by a French company, ETIA, Compiegne Cedex, France, which is represented in the U.S. by BNW Industries, Tippecanoe, Ind. (phone 574-353-7855). Aaron Norris is owner and Vice President, Sales of BNW, which primarily manufactures the Belt-O-Matic conveyor dryer. Norris says that the Safesteril is used widely in Europe, China, and Japan on herbs and spices but has not yet been installed in the U.S.

The heart of the process is the Spirajoule, an electrically heated screw turning in a Teflon-lined trough. The screw heats the powder being treated and prevents condensation of the live, atmospheric steam to which it is exposed. Residence time is controlled by screw speed and ranges up to 20 min. The trough is 6–8 m long and 600 mm in diameter. Volumetric capacity is 1.6–4.8 m3/hr.

After heating, the powder passes to the Frigomix cooling unit, where chilled water is passed through a screw while cool, dry air is passed through the product. In both the heating and cooling steps, the heat transfer is between the screw and the material being processed. It is not entirely clear what the steam does, because the major thermal contribution from steam is usually from condensation, giving up the latent heat. In this process, there should be no condensation. The steam does help exclude air which could cause oxidation and helps keep the equipment hot.

After cooling, the material is packaged, which requires a clean environment to avoid recontamination.

In this process, as in the others described below, the specific conditions required to achieve a desired reduction in microbial load depends on the initial load and the properties of the specific material. The rate of reduction is generally a first-order process in which the rate constant increases exponentially with temperature. However, for a mixed load of microbes, there can be a wide diversity in thermal sensitivity. It is common to design a process for the most thermally resistant microbe, but it is not always clear what that may be.

When present, spores are generally the most resistant form of microorganism, and spores of Clostridium botulinum are a special concern for low-acid foods that may encounter an anaerobic environment. Molds, yeasts, and insects are generally fairly sensitive to heat and may be the targets of concern in many dry foods. A constraint on permissible conditions is the retention of flavor, color, texture, and volatile essential oils. 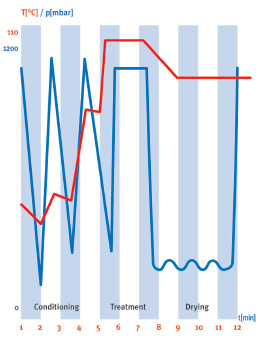 The SteamLab Approach
Another approach to steam sterilization of solids was displayed at the 2006 IFT Food Expo® by SteamLab Systems GmbH, Hamburg, Germany (phone +49 40 28804850, www.steamlab.de). Gerard Markerink, Global Sales Manager, described the system as using specially constructed chambers ranging in volume from 400 to 12,000 L, producing 200–6,000 kg of powder/hr. Products are loaded in special equipment, which guarantees treatment of every particle and prevents cross-contamination in the machine. Loading equipment could be trays, porous packages such as cloth bags, or specially designed bins.

A vacuum is applied, which helps to remove some surface contamination and, more important, removes air from the chamber. Then saturated steam is introduced, which, at the reduced pressure, is at 150–270ºF, depending on the goal of the treatment. Sensitive herbs are treated very gently at 165–210ºF, and powders with heat-resistant spores at >250ºF. For disinfestation of insects and eggs, 160ºF is sufficient, because the effect of the very deep vacuum helps destroy the eggs.

The saturated steam becomes superheated at lower pressures because its temperature is above the boiling point of water at a lower pressure and so can deliver some sensible heat before reaching its saturation condition at a given pressure. By removing air, the system removes a potential insulating layer around the material, permitting rapid access of the steam to the pores. The product is held for a predetermined time, then vacuum is again applied, rapidly cooling the product and exhausting the steam.

Atmospheric pressure is then restored, and the product is moved through a second door to a clean room where it is conditioned if necessary and packaged. The system is able to treat almost all powders, although some may cake or lump from the treatment and therefore require milling or screening before packaging.

Units have been installed at customers’ plants in Europe, the Middle East, Africa, and Asia. The company operates systems at two sites for contract treatment and has experience with more than 300 kinds of ingredients, including herbs, spices, dried mushrooms, cereal, nuts, and dried fruits. Cycle times are about 30 min, and the chambers can be filled about 50%.

The technology provides full traceability, treatment of every particle, maximum flexibility when treating many different products without stopping the process for cleaning, and no cross-contamination.

Flash Pasteurization
A system using principles similar to those applied in SteamLab’s system was conceived by and is still being studied at the Eastern Regional Research Center of the U.S. Dept. of Agriculture’s Agricultural Research Service, Wyndmoor, Pa. (phone 215-836-3754). Chris Sommers, Lead Scientist in Food Safety Research, explained that the process has evolved so that vacuum is not used until after steam exposure, where it accelerates cooling.

The original focus of the work was reduction of surface contamination on chickens, a particularly challenging target because of the odd shape and roughness of the skin. The original researchers included Arthur I. Morgan Jr., James Craig, Michael Kozempel, Richard Radewonuk, and Neil Goldberg. A prototype was constructed that automatically cycled between vacuum and steam application, with a goal of 1.5 sec/treatment. The technology, described by Kozempel et al. (2003), was transferred to Alkar-RapidPak, Inc., Lodi, Wis., for commercialization. The company commercialized flash pasteurization using updated equipment designs in fall 2006.

Given the difficulties posed by treating chickens, the research turned to smooth surface products such as frankfurters and sausages, where 2- to 3-log reductions in Listeria were achieved. Alkar-RapidPak was able to eliminate the vacuum step, using a blast of steam alone, followed by vacuum cooling. The commercial unit treats eight packages of franks at a time just before the packages are sealed.

Other smooth-skinned products, such as fruits, can also be treated successfully.

According to Sommers, this treatment, combined with use of growth inhibitors, may meet USDA’s Food Safety and Inspection Service requirements for Alternative 1 Listeria testing and certification and relieves the manufacturer of some testing requirements. The usual antimicrobial growth inhibitors are sodium diacetate and potassium lactate, which Sommers says do not affect the flavor of sausages.

Process Development Paradigm
The general idea of using direct steam contact for surface sterilization and pasteurization of solids has been implemented in several distinct ways that have been commercialized. The challenge has been to avoid damage from moisture and overheating while achieving the required time and temperature regimen. Vacuum and a chilled screw have been used to achieve rapid cooling after steam exposure.

Two of the systems discussed here are by European companies now looking for U.S. applications, while the other was developed in a USDA lab and has been commercialized by a U.S. equipment manufacturer. In a way, the story is a paradigm of food process development, in that solutions are found for specific problems and then used for other applications.