A leading cause of death, cardiovascular disease (CVD) remains one of the top consumer health concerns. Major risk factors for CVD include high cholesterol levels, high blood pressure, and obesity. According to the American Heart Association, of Americans age 20 and older, 140 million are overweight or obese, 72 million have high blood pressure, and 105.2 million have total blood cholesterol levels of at least 200 mg/dL. 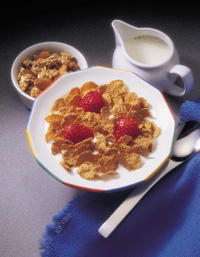 Functional food manufacturers have addressed CVD with products that offer heart-health benefits. Products ranging from beverages and nutrition bars to confectionery and prepared meals have been tailored for heart-health–conscious individuals. These products contain ingredients—fiber, whole grains, phytosterols, soy proteins, omega-3 fatty acids, and flavonoids—that are said to lower the risk factors for CVD. Here is a look at some of the latest research and ingredient offerings.

In November 2006, GTC Nutrition, Golden, Colo. (phone 800-522-4682, www.gtcnutrition.com), began offering OatVantage™, an oat bran concentrate that is a soluble fiber that is high in oat beta-glucan, dispersible in water, highly viscous, and nondigestible in the small intestine.

According to a press release (Orafti, 2006) from Orafti Active Ingredients, Malvern, Pa. (phone 610-889-9828, www.orafti.com), prebiotic fibers, inulin, and oligofructose, helped to inhibit atherosclerosis in mice with a predisposition to heart disease. The researchers showed that diets supplemented with oligofructose-enriched inulin (Orafti’s Beneo™ Synergy1) or 10% long-chain inulin (Beneo HP) inhibited the build-up of fatty deposits in the animals’ arteries.

Behall et al. (2006) showed that increasing the consumption of whole-grain foods high in soluble or insoluble fiber can reduce blood pressure and may help to control weight. The researchers gave seven men, nine premenopausal women, and nine postmenopausal women a controlled Step I diet for 2 weeks, then replaced about 20% of energy in the diet with whole-wheat/brown rice, barley, or half wheat-rice/half barley for 5 weeks each. The subjects’ systolic pressure was lower after consuming the wheat/rice and half-and-half diets. The diastolic and mean arterial pressures were reduced after consuming any of the three whole-grain diets.

The United Soybean Board reported that new research indicated that soy may contribute to heart health through a process referred to as "decreased platelet aggregation" (USB, 2006). The researchers gave 29 post-menopausal women a daily supplement of 100 mg of isoflavones or a placebo for 3 mo. The subjects who received the isoflavone supplement showed a significant decrease in the density of a particular platelet receptor known as TxA2. The density of TxA2 was mostly unchanged in the subjects who took the placebo. The researchers said that decreasing the density of platelet receptors reduces the risk of forming a blood clot that could lead to a heart attack or stroke.

Kerry Ingredients, Beloit, Wis. (phone 800-328-7517, www.kerryingredients.com), launched a new phytosterols line in January 2007. A proprietary encapsulation process allows manufacturers to use free sterols as an ingredient during the manufacturing process without the use of special equipment or any organoleptic effects in the finished product.

Recent studies have backed up omega-3 fatty acids’ heart benefits. Wang et al. (2006) conducted a systematic review of studies and found that increased consumption of omega-3 fatty acids from fish or fish-oil supplements reduced the rates of mortality from all causes, cardiac and sudden death, and possibly stroke. Theobald et al. (2007) indicated that a moderate increase in the daily intake of DHA to ~0.7 g lowered diastolic blood pressure. And Yokoyama et al. (2007) showed that EPA is a promising treatment for the prevention of major coronary events, especially non-fatal coronary events, in Japanese hypercholesterolemic patients.

Gorinstein et al. (2007) compared the influence of hesperidin and naringin, the main flavonoids of orange and grapefruit, on plasma lipid profile and antioxidant activity in rats fed a cholesterol-containing diet. After 30 days, they found that diets supplemented with hesperidin and naringin significantly hindered the increase in plasma lipid levels caused by dietary cholesterol.

More to Come
Research is pointing to other ingredients said to lower blood pressure and cholesterol.

A vegetarian form of superoxide dismutase, GliSODin® from PL Thomas & Co., Morristown, N.J. (phone 973-984-0900, www.plthomas.com), was shown to be a preventive agent against atherosclerosis in individuals with metabolic syndrome (PL Thomas, 2007). The subjects who took GliSODin had a significant improvement in antioxidant status and a reduction in malondialdehyde, a measure of lipid oxidation. They also had a significant reduction in intima media thickness (thickening of the artery).

The company also offers MenaQ7, which provides natural vitamin K-2 as an extract of natto, a fermented soy food from Japan. Vitamin K-2 was recently shown to reverse arterial calcifications in rats (PL Thomas, 2006). Arterial calcification is generally regarded as an independent risk factor for cardiovascular morbidity and mortality.