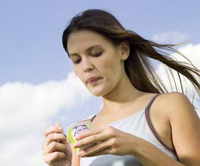 Fiber, such as polydextrose, inulin, and resistant starch also affect weight. For example, King et al. (2005) showed that the polydextrose Litesse®, from Danisco, Elmsford, N.Y. (phone 913-764-8100, www.litesse.com), can promote satiety. They gave eight female and seven male subjects various yogurt formulations that contained either polydextrose, xylitol, or both for 10 days. They concluded that the usefulness of xylitol and polydextrose for appetite control is a result of the ingredients’ lower energy content and suppression of appetite.

Abrams et al. (2007) showed the long-term benefits of an oligofructose-enriched inulin, Beneo™ Synergy1, from Orafti Active Food Ingredients, Malvern, Pa. (phone 610-889-9828, www.orafti.com), on modulating BMI and body composition changes during pubertal growth. They gave 100 healthy, non-obese adolescents age 9–13 years a daily supplements of either 8 g of Beneo Synergy1 or a maltodextrin placebo (both via orange juice or milk) together with their breakfast for one year. The subjects were then kept under study for another year without the supplementation. The increment in BMI over the intervention year was much lower for the experimental group. Body weight and body fat mass were also signifi cantly lower in this group compared to the control group. During the followup period, the difference in BMI between the two groups was maintained and even increased after stopping the supplement for an entire year.

Research presented at the 2006 Annual Meeting of NAASO, The Obesity Society showed that fermentation of natural resistant starch derived from corn is an important and previously underestimated mechanism in weight management (National Starch, 2006) Previously, it had been assumed that energy dilution and bulking were the dominant mechanisms responsible for dietary fi ber’s benefi ts. Additional research by the same team of researchers showed that the dietary consumption of Hi-maize® resistant starch from National Starch Food Innovation, Bridgewater, N.J. (phone 800-743-6343, www.foodinnovation.com), signifi cantly increased important satiety hormones and reduced abdominal fat in animal models.

Fat-Based Ingredients
Lipid-based ingredients affect weight by promoting satiety and increasing lean body mass. A patent-protected combination of oat and palm oils that is formulated in a novel emulsion, Fabuless™, from DSM Food Specialties, Parsippany, N.Y. phone 610-650-8480, www.dsm-foodspecialties.com, www.resisttemptation.com), is said to promote satiety. Its microstructure prevents the digestion of palm oil droplets until relatively deep in the small intestine. Undigested fat arriving in the latter part of the small intestine triggers an “appetite satisfi ed” signal to the brain.

Diepvens et al. (2007) showed that consumption of yogurt containing Fabuless improved weight maintenance in 50 overweight women age 18–58 years. The researchers assigned them to an initial 6-week weight-loss period followed by randomization to receive either a daily dose of yogurt containing Fabuless or a placebo for 18 weeks. After the initial weight loss stage, the control group regained an average of 3 kg while the experimental group did not experience a signifi cant increase in body weight. The experimental group was less hungry 4 hr after yogurt consumption at the end of the study.

In August, Lipid Nutrition, Channahon, Ill. (phone 815-730-5200, www.lipidnutrition.com), announced that its CLA, Clarinol™, would be included in Jamba Juice’s Weight Burner™ Super Boost and Fit ’n Fruitful™ Smoothie. Lipid Nutrition also offers PinnoThin™, a Korean pine nut oil–derived ingredient that suppresses the desire to eat. The ingredient stimulates the release of the hunger-suppressing hormone cholecystokinin and a glucagon-like peptide, which not only helps the body digest fats better but also sends a “full” feeling to the brain.

Neobee ® medium-chain triglyceride (MCT) from Stepan Company, Northfi eld, Ill. (phone 847-446-7500, www.stepan.com), is a readily absorbed, low-calorie fat source that travels directly to the liver and is metabolized in one-eighth as long as long-chain triglycerides. As a result, MCTs are preferentially burned for energy and do not accumulate in the body as fat, making them ideal ingredients for products targeting weight-challenged consumers.

Proteins
High-protein diets are benefi cial in weight maintenance because of their satiating and thermogenic effects. Classens et al. (2007) investigated the effect of soy protein hydrolysate (SPH) with and without a carbohydrate pre- and afterload on energy metabolism and hormonal secretion in eight healthy, non-obese subjects. The results showed that the larger diet-induced thermo-genesis (DIT) that occurred after consuming protein rather than after consuming CHO may be related to the glucagon response that is induced by protein but not by CHO.

A University of Illinois study compared the effects of SPH and soy peptides with those of leptin, hypothesizing that soy might behave in the body in a similar way (Illinois, 2007). Leptin is a hormone produced in adipose tissue that interacts with receptors in the brain and signals a sense of fullness. The researchers found that soy affected these mechanisms and hormones by boosting metabolism, not by reducing food intake.

Extracts
Berkem Inc., New York, N.Y. (phone 646-274-1292, www.berkem.com, www.svetol.com), offers Svetol®, a natural plant extract of decaffeinated green coffee. It is rich in chlorogenic acids and caffeic acid, which limits the oxidation of lipids in the liver. A recent study conducted at Bordeaux University showed that the extract inhibited glucose-6-phosphatase, a hepatic enzyme involved in glucose release from the liver into the bloodstream (Berkem, 2007).

In December 2006, Pharmachem Laboratories Inc., Kearny, N.J. (phone 800-526-0609, www.pharmachem.com), announced that the Food and Drug Administration did not object to weight control and starch reduction claims for the company’s Phase 2 Starch Neutralizer® dietary ingredient and fi nished dietary supplement products containing the ingredient. The structure/function claims for the proprietary extract of the white kidney bean are “May assist in weight control when used in conjunction with a sensible diet and exercise program” and “May reduce the enzymatic digestion of dietary starches.”