The National Aeronautics and Space Administration will renew flights to the moon and establish an outpost for habitation for at least six months during the next ten years and will launch a manned mission to establish an outpost on Mars about ten years later. This new venture, the Constellation Program, builds on our experiences in space exploration with wholly new technologies. We are no longer in the wondrous science fiction of Star Trek but are entering the realm of reality in reaching out to learn of our neighbors, our origins, and our futures. 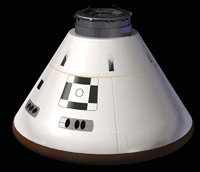 There is a relative paucity of information in the popular publications on just how the astronauts are to be nourished during the very long months and years aboard the Orion capsule. Not that food is being ignored, but rather that feeding is not the priority of the writers—there’s nary a mention in, for example, “The Future of Exploring Space” (Scientific American, October 2007) or “Space Age Turns Fifty” (National Geographic, October 2007). How so like today’s Earthbound folks to take for granted our safe, abundant, and diverse food supply.

The complexity of feeding six astronauts for the round trip to Mars—more than three years, with no resupply, as there is on the International Space Station (ISS)—should mandate daring probes and innovative technologies that, not incidentally, should benefit all mankind. Professionals at NASA’s Advanced Food Technology, led by Michelle Perchonek ([email protected]), will rise to the challenge.

Food Requirements
NASA is providing 147 food and 53 beverage items and the Russians 130 items (about half food and half beverages) to the ISS, currently the longest-duration life-support operation, suggesting that feeding astronauts is truly a significant program. Considering that the ISS is supplied on a regular basis by, for example, the Shuttle missions, the variety is much greater than offered at your local restaurant.

Foods for the ISS and the Shuttles include dehydrated, thermostabilized, intermediate-moisture, and “natural form” such as nuts or raisins. Almost all are in hermetically sealed barrier packages specially engineered for safety, yet be easy to open and access the contents. Although the astronauts relish very high-quality food, and the providers strive to deliver their “customers’” desires, sometimes the eating is not necessarily gourmet dining. But the technologists try—and will try harder for the deep-space missions which cannot be reprovisioned by an evening pizza delivery.

The moon mission will involve four astronauts in an Orion capsule—about 1.5 times the size of Apollo—on a six-month journey by 2020. In one scenario, some food will be cached on the moon in anticipation of the arrival of the astronauts to establish the base. Food therefore must have a shelf life of at least one year. Although many preserved packaged foods on Earth already have a one-year shelf life, food loses top quality rather rapidly at the ambient-temperature conditions that will exist on the mission.

Regardless of the destination, each crew member must consume food for sustenance and to meet nutritional needs, safe food to ensure against illness, and good-quality food for psychological satisfaction (the powerful link to home) and to foster maximum efficiency.

Simultaneously, because the capsule is not large and launch power is relatively limited for weight thrown into space—and is costly, at about $ 50,000/lb—the food delivery system must minimize resources and package material weight. Thus, the food system must balance volume, mass, waste, power, cooling, air, and crew time—they are unlikely to be preparing and cooking from scratch or using fresh ingredients to bake cookies. With limited volume and resources aboard, galley decisions must be made: hot, cold, or ambient water? food serving temperature? where and how can 10,000 kg of food be stowed to be accessible every day for months and years? will the crew accept nutrient-dense foods? how willing will crew members be to compromise the food system?

On the outposts, consideration is being given to combinations of stored and bioregenerative food systems. Crops may be grown from human and other wastes and converted into foods that in turn may be prepared for astronaut consumption. Among the crops that might be grown are salad vegetables that can be eaten fresh and potatoes, soybeans, rice, beans, peanuts, algae, mushrooms, and wheat that must be processed prior to consumption. It should be evident that this option requires use of the limited water supply and limited power availability, plus increased waste and possibility of microbiological contamination.

Packaging Considerations
Current packaging for the relatively short missions is generally multilayer to achieve high barrier against water vapor, oxygen, and recontamination. Much of the multilayer packaging is aluminum foil/plastic lamination, often with multiple mechanical vacuums drawn on the interior prior to hermetic sealing. While aluminum foil, when properly protected, is an excellent barrier, it is relatively heavy and difficult to dispose of, in a space vehicle sense. And if microwave reheating becomes desired, aluminum foil is obviated.

Because of the duration of the missions—and obviously the Mars mission, especially if the outpost is pre-provisioned—shelf life of the food is required to be 3–5 years. In transit vehicles, environments will be zero gravity, elevated oxygen, and reduced pressure, along with some exposure to radiation, among other variables. Little to no food preparation is almost a mandate on transit vehicles.

• Safety. Shelf life of packaged foods is a critical issue. The current prime preservation/package integer is thermostabilized pouches, more commonly called retort pouches. It must be axiomatic that the product/packages do not at any time during the missions cause a microbiological problem. Sterility and hermetic seals that do not permit recontamination are indispensable.

• Quality Retention. Food product quality, including biochemical (i.e., flavor), invariably deteriorates at ambient temperature over time. NASA has so far limited storage temperatures to ambient, i.e., no refrigeration. Shelf-life tests on military Meals, Ready-to-Eat (MREs) and some foods for space travel have been or are being conducted. Some have been demonstrated to be acceptable for one year, but acceptability is not necessarily what astronauts prefer. A confined space capsule where eating is both physiologically essential and psychologically needed is no venue to compromise food eating quality.

Minimization of product quality change may be effected by reduction of the thermal process and reduction of oxygen within the product and its package. Heat and oxygen are two major influences on packaged food product quality. By addressing both in a holistic hurdle manner, sensory and nutritional attributes may be better—or, hopefully, optimally—retained.

The retort pouch thermal process may be successfully reduced since the surface-to-volume ratio permits less thermal input to achieve sterility. The oxygen issue requires much more attention because this gas today is present in the food and the processing environment, and conventional packaging operations reduce headspace oxygen only to parts per million—still more than enough to trigger and perpetuate invariably adverse oxidative reactions. Furthermore, any entry of atmospheric oxygen by permeation or transmission through the package structure compromises the oxygen integrity of the contents.

• Microoxygen Packaging. One key variable is significant reduction in oxygen present in the package by processing and packaging under inert gas conditions, a program underway at the University of Georgia’s Dept. of Food Science and Technology under the direction of Louise Wicker ([email protected]) with NASA contractor Infoscitex, which is studying glass coating of plastic films. Working with the team are several organizations, such as MOCON, measuring oxygen levels in the ppb range, and Grace Darex, addressing the entry of atmospheric oxygen through sides of the heat seals.

Addressing the Problem
Active planning is underway for both missions. Mission Control in Houston is already practicing Constellation missions. The NASA workshop reflected that real concern exists for life-support systems, including, of course, food.

That food and food packaging technologists are addressing the problem with even more intelligence and vigor than their relatively tentative efforts for Mercury, Gemini, Apollo, Space Shuttle, and ISS should embolden us to believe that some well-fed astronauts will indeed populate the moon and Mars during the next two decades.