Growing, manufacturing, buying, and preparing food would be impossible without a safe and abundant supply of water. Countless food items that are staples of American meals either contain water or require consumers to add water.

From farm and field to restaurants and dining-room tables, water is a key component of food production and food processing. Incontrovertibly, whether used as a primary ingredient in numerous food and beverage items (e.g., canned soup, frozen vegetables, or soft drinks), as the source of irrigation for farmland and hydration for food animals, as a conduit for transport of raw materials, or as a means to quench the thirst of farmers, crop workers, and food plant employees, water is integral to every aspect of the food industry.

Unfortunately, the type of water necessary for food and drink—freshwater—is a limited resource. Of the earth’s water, 97% is salty and unsuitable for drinking, leaving only 3% as freshwater. Of that 3%, two-thirds is frozen in ice caps and glaciers, which means that only 1% of the earth’s water is available for drinking, food production, and other uses. Factor in the myriad of domestic and industrial activities that consume and pollute this natural resource, and it becomes clear that nature and the hydrological cycle can do only so much to maintain the purity of the most common ingredient.

For this reason, a safe water supply is dependent on clean water standards, disinfection treatments, and conservation (or preservation) strategies. Appearing in the January-February 2008 issue of Journal of Food Science, the Institute of Food Technologists’ Scientific Status Summary “Just Add Water: Regulating and Protecting the Most Common Ingredient” discusses drinking water standards and regulations, freshwater resources, water pollution and predominant sources of contamination, and the effects of agriculture and food processing on water quality and wastewater treatment.

• The Clean Water Act governs the control of water pollution. With the objective of maintaining and restoring the chemical, physical, and biological integrity of the nation’s waters, the CWA requires state and local jurisdictions to monitor the quality of waters within their regions. Even though the CWA allows state and local officials to develop their own water quality standards, the standards must be at a level that renders all publicly accessible waters safe for fishing and swimming (EPA, 2002).

To facilitate water assessments, EPA developed minimum testing schedules for specific pollutants in public drinking water systems to ensure that contaminants in drinking water do not exceed maximum levels (EPA, 2003b). The SDWA applies to all public water sources used for drinking purposes; it does not apply to private water sources serving fewer than 25 people (EPA, 2003b, 2004a).

Surface water is any body of water that is exposed to the atmosphere, such as lakes, oceans, rivers, and streams. There are two forms: saltwater and freshwater. Both are suitable for the sustenance of aquatic life and recreational activities such as swimming, but only freshwater is suitable as an immediate source for drinking water. While desalination of ocean water is possible, it is a highly expensive procedure whose effectiveness has been neither perfected nor proven environmentally sound. Besides being the source for most drinking water in the U.S., surface water is also the main source for irrigation systems, such as dams, canals, and sprinkler systems.

Approximately 74% of the freshwater used in the U.S. comes from surface water sources, and 26% comes from ground water sources (Hutson et al., 2004; EPA, 2006). Located underground in the crevices and spaces between sand, soil, and rocks, ground water is the only source of drinking water for many parts of the U.S. that have limited or no access to surface water. Approximately 46% of U.S. residents rely on ground water for drinking water (EPA, 2002). Moreover, most of the water used for self-supplied domestic use and agricultural purposes (such as watering crops and livestock) is ground water.

Water Pollution and Wastewater Management
Whether from surface or ground water sources, water usually encounters some form of pollution, so it must go through water treatment plants before it can be distributed via taps or bottles. Water pollution dramatically increases the cost and amount of treatment needed to provide safe drinking water to consumers (EPA, 2002).

Water that comes in contact with pollutants such as human and animal waste, food scraps, chemicals, oils, and so on is called wastewater. While domestic wastewater infuses the U.S. water supply with problematic pollutants such as unused pharmaceuticals and personal care products discarded via sinks and toilets, wastewater from the production and processing of food yields other problematic contaminants (Raloff, 2000; Kinney et al., 2006). 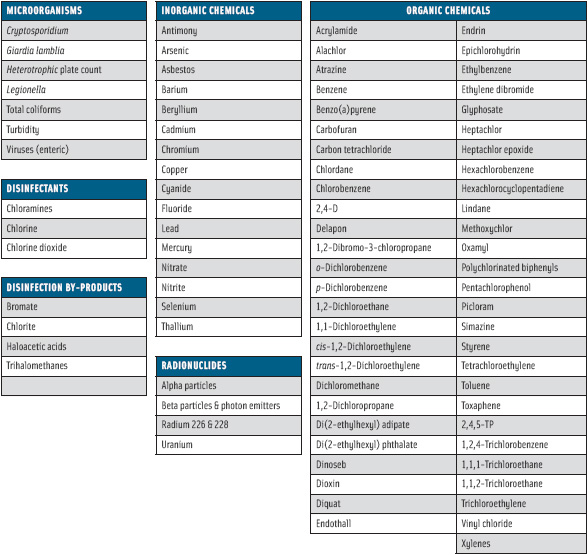 • Agricultural Wastewater. Agricultural activities are the most predominant source of pollution for U.S. lakes, rivers, and streams. Certain agricultural practices introduce pollutants that adversely affect aquatic animals or otherwise hamper public use of millions of gallons of surface water (EPA, 2002).

For example, in typical animal feeding operations, the raising of animals occurs in confined situations: animals are kept on a small parcel of land which they share with their feed, their manure, production operations, and any dead livestock. Leaks or spills from waste-storage structures (such as manure lagoons, holding ponds, or injection wells) or runoff from manure stacks can enter water sources, causing adverse effects on aquatic ecosystems (EPA, 2007a).

The nitrogen, phosphorus, organic solids, and microorganisms contained in manure result in increased algae growth, which may eventually lead to fish kills, reduced biodiversity, and unpleasant tastes and odors in water (EPA, 2003a). Moreover, livestock carry microorganisms such as Cryptosporidium, Escherichia coli O157:H7, Giardia lamblia, Listeria, and Salmonella, which are harmless in livestock but pose human health hazards if present in the water supply (EPA, 2007b). This leads to elevated costs for drinking water treatment (EPA, 2003a).

Animal husbandry is not the sole origin of agricultural wastewater: crop production regularly introduces contaminants that can adversely affect water quality. For example, the tilling of crops erodes top layers of soil, leading to soil sediment. A significant source of pollution for surface waters, soil sediment reduces the clarity of water, thereby creating a less than ideal environment for aquatic organisms (Burkart and Jha, 2007; Helmers et al., 2007). Similarly, repetitive planting of the same crops on the same land routinely exhausts the natural supply of nutrients in soil (Burkart and Jha, 2007). Fertilizer applications, though beneficial for crop soil, create a runoff of nutrients that impairs water sources. Excessive levels of nitrogen and, in particular, phosphorus cause surface water quality problems by serving as food for algae and other aquatic plants.

Expensive water purification technologies can remove nitrogen and phosphorus from water to prepare it for human consumption, but aquatic residents are less fortunate (Burkart and Jha, 2007). When the overgrown aquatic vegetation dies, the process of decay usurps a disproportionate amount of oxygen in the water, which may lead to the death of fish and other aquatic organisms.

• Food Processing Wastewater. In the food processing industry, besides being used as an ingredient in food and beverage products, water is also used as a means for heating and cooling, a medium for transporting in-process raw materials, an initial and intermediate cleaning source for produce, meat, seafood, and poultry, and the principal agent for cleaning and sanitizing plant machinery and surrounding areas. In fact, washing and rinsing make up 50% of the water used in the fruit and vegetable sector, and the U.S. Dept. of Agriculture has established minimum requirements for the amount of water used to clean poultry products (USAEP, 1997).

As a result of these and other uses, the food processing industry utilizes a significant amount of water and generates turbid wastewater that contains high concentrations of nutrients, organic matter, and residual chemicals. For example, the slaughtering of meat and poultry and the skinning and eviscerating of fish create wastewater containing blood by-products; fats, oils, and greases; loose flesh and tissue; and pathogenic organisms such as E. coli and Salmonella. Wastewater from the produce sector may contain sugars and starches, other organic matter such as seeds and rinds, and residual pesticides. And in the dairy sector, wastewater pollutants typically include milk waste and sanitary cleansers (USAEP, 1997).

The excessive amount of organic suspended solids, oily substances, and nutrients in food processing wastewater creates high biochemical oxygen demand (BOD). Biochemical contaminants usurp oxygen in water, so higher levels of BOD greatly reduce the oxygen content of water, which impairs aquatic ecosystems (EPA, 2004b). For some municipality-based food processors, this translates into costly sewage surcharges levied by municipal wastewater treatment plants for the supplemental treatment this type of wastewater demands. For other food processors, wastewater with high BOD levels translates into investment in either pretreatment systems that reduce BOD before discharging wastewater into publicly owned wastewater systems or full-treatment systems that completely treat wastewater before reusing it or discharging it directly into receiving waters (EPA 2004b; Colic, 2007).

Regardless of the route to treatment, wastewater from food processing contains a load of contaminants that would render surface and ground waters unsuitable for drinking, recreational use, or aquatic habitats without undergoing treatment.

What Can the Food Industry Do?
Water safe for human consumption and use is a life-sustaining necessity that businesses and individuals often take for granted. Few consider that this privilege is the result of federal, state, and local entities enforcing laws and setting standards aimed at maintaining safe, clean water.

Nonetheless, the severe drought currently being experienced by Southeastern states illustrates that an abundant supply of safe water requires more than just the passing and enforcing of laws by federal, state, and local officials. It requires the diligence of the nation’s residents and businesses to abide by the laws and follow safe practices that conserve water and minimize water pollution: For the average household, perhaps this means installing low-flush toilets and refraining from discarding unused prescriptions and personal care products in them.

For agricultural operations, minimizing water pollution may mean exploring ways to reduce fertilizer and pesticide applications to crops and promptly cleaning spills and sealing leaks from waste-storage structures. And for food processors, investigating and utilizing methods to reduce the amount of organic suspended solids in wastewater, using more-robust wastewater pretreatment systems, and increasing efforts to reclaim and reuse water may be effective ways to minimize water pollution.

Ultimately, clean water is not merely a necessity for providing water safe for human consumption and use. Unpolluted water is vital for the habitats of countless aquatic organisms and is essential for the producing, processing, and preparing of food. Even though modern water treatment facilities remove a sizable amount of impurities from water, there are still aspects of water quality monitoring that are beyond the control of utilities and authorities. It is thus everyone’s responsibility to follow good-sense practices for improving the quality (and availability) of water.

Scientific Status Summary Online
The IFT Scientific Status Summary, “Just Add Water: Regulating and Protecting the Most Common Ingredient,” by Toni Tarver, appears in the January-February 2008 issue of Journal of Food Science and is also available online at www.ift.org. The Scientific Status Summary discusses the topics covered in this synopsis and related topics in more detail and also includes an extensive table listing types of contaminants, sources, maximum allowed levels, and potential health effects if the maximum levels are exceeded.