Support facilities refer to the areas of a food plant used for purposes other than direct manufacturing. These include space and equipment for utilities, space for employees to change clothes and to eat, and offices and labs. This column discusses a few of the utilities and is based on material in a forthcoming book, Practical Design, Construction and Operation of Food Facilities, to be published by Elsevier. The remaining utilities and other areas will be covered in a future column. 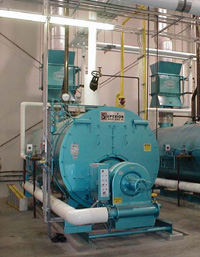 • Steam is usually raised in a boiler. Good practice is to have at least two boilers, each capable of providing about 75% of the required total load, so that the plant can operate—perhaps at reduced capacity—if one boiler is down for maintenance or suffers a failure. Boilers for food plants normally produce steam at 100–150 psi, which is reduced as needed at the point of use. It is rare to need much higher-pressure steam in food processing.

Steam is normally distributed in carbon steel pipe with threaded connections. Good practice installs steam traps at low points in the lines to remove condensate. Discharge of steam traps should be direct to drains or to condensate-return systems. Condensate is recovered to save heat and specially treated water. Boiler feedwater may be softened in order to reduce scale formation, which adds to processing cost by reducing heat transfer rates and by clogging pipes. Steam and condensate in carbon steel pipe pick up rust and corrosion products, which will quickly stain the floor if they are discharged there.

Boilers often are fired with natural gas, but may use coal, fuel oil, or waste material. Fuels other than natural gas may require special boilers. Boilers that use wastes, such as paper, wood, or crop residues, need special controls to compensate for the variable heating values of such fuels. With the rising cost of fossil fuels and the increasing emphasis on sustainability, it may become more common for food plants to use unconventional fuels in steam boilers.

A high-pressure, stationary boiler usually requires a licensed operator in attendance. This can be a specially trained member of the maintenance staff, who may have additional duties. Steam below 15 psi does not require a licensed operator and is often adequate for food processes.

Other heat sources for processing include closed-loop hot-water and hot-oil systems. These use steam or fuel to heat a circulating medium, such as water, under pressure (so it can exceed 212°F) and heat-stable oils, which can exceed 500°F. Circulating fluids may be preferred over steam because they do not pose the potential hazards of steam and, in the case of oil, can reach higher temperatures than are practical with steam. They also can provide good temperature control in processing equipment. While boilers commonly are located in a relatively central place, circulating systems are usually located close to the use point in order to minimize distribution costs and are considered part of the process.

Boilers should be located on an outside wall with access to outside air for combustion and with room to pull tubes, if necessary. Often, a large, louvered panel is used both for air intake and potential access. An air-emissions permit is usually required for the boiler stack. Most natural gas does not require treatment of its combustion products before discharge, but coal or waste fuels may, depending on their sulfur content and the efficiency of the boiler.

There are situations in which a food plant can get steam from an outside source, such as a co-generation plant or a neighbor with excess steam. This can save on capital, but makes the plant dependent on another party for an important resource. In such a case, it might be wise to install a standby boiler or to establish in advance a source from which to obtain a replacement boiler. There are firms that promise to deliver a boiler on a trailer in less than 24 hours.

• Electricity is usually supplied to the site by a high-voltage line from the local utility. The plant needs to install a step-down transformer and then an electrical distribution system with several voltage levels; 440 V, 220 V, and 120 V are common. The higher the voltage is, the less expensive the wiring and the more efficient the conversion of electricity to useful work in equipment motors or to light from fixtures. Equipment and areas of the plant are usually wired separately so individual pieces can be isolated. Switchgear and motor starters generate heat and so should be in rooms that are ventilated. Much of the switchgear is rarely accessed and thus may be located relatively remotely.

Control and communications wiring is normally relatively low-voltage and should be isolated from power wiring. Wire in a food plant is normally contained in metal conduits, which protect it from accidental damage as well as from water, dust, insects, and rodents. Conduits should not be over-filled. Local codes usually dictate good practice. Conduits should not be installed too close together for ease of cleaning. Conduits should be one inch away from walls for the same reason, and hangers should be of the same sanitary design as that used for utility and process piping—that is, no perforated channel and no all-thread rods because these products are hard to clean, and all-thread rods can cause injury with their sharp threads.

Given the importance of computers to modern manufacturing plants, a reliable power source is critical. One approach is to have power supplied from two independent substations so that at least one will always be available, but this is not always possible to arrange. Another approach is to have a standby electrical generator fueled by natural gas or diesel fuel. Often, the generator is supplemented by a large, battery-operated uninterruptible power supply (UPS) that can detect a drop in incoming voltage, supply power temporarily, and switch to an alternate source.

Few food plants are self-sufficient in electricity, but this may become more common in the future, especially for situations where the plant can also use the waste heat from a generator. This is called co-generation. The generator may be driven by a gas turbine or a large diesel engine. In some areas, local utilities are required to buy surplus power generated by private parties. Unless otherwise required by law, the utilities may not pay a very high price because most utilities want to discourage co-generation since it means a loss of business for them. The threat of investing in co-generation is often effective in negotiating favorable electricity rates for a new plant.

• Water is important in food processing as an ingredient, for cooling, and for cleaning. Water must be potable, meaning suitable and approved for drinking, but even potable water may require additional treatment to remove chlorine and suspended matter. As previously mentioned, boiler feedwater is often treated by ion exchange to remove hardness (calcium and magnesium salts that can form scale). Water for cooling may be reused either for cooling again by returning it to a cooling tower or for other purposes, such as cleaning. Water in a closed cooling circuit may have chemicals added to reduce scale and corrosion, in which case care must be taken so that such water does not contaminate food.

Water may be supplied by a public or private utility or from a well or surface water source, such as a lake or river. If a firm supplies its own water, then it is responsible for testing and treatment to ensure that it is potable and suitable for processing. Water quality often varies with seasons and weather, although water from an underground source varies less than that from other sources.

Most of the water that enters a plant eventually is discharged to a sewer and then to the environment. The exception is water that is used in the product. If this is substantial, it is prudent to meter incoming and discharge water separately and to negotiate fees based on actual use. Otherwise, it is common to base sewer charges on incoming water rates, assuming that incoming and discharge rates are approximately equal. Water may be distributed in carbon steel pipe, plastic pipe, or copper tubing. In process areas, ingredient water should be distributed in stainless steel tubing.

Food scientists and technologists rarely need to design food plants, but they often need to direct architects, engineers, and consultants or to help select them. If this is the case, it is helpful for the food scientists to understand some of the challenges and constraints in food-plant design.