The tremendous variety of seafood calls for a wide range of processing approaches, nearly all highly labor-intensive. Think of shellfish—clams, oysters, and mussels; crustaceans, such as lobsters, shrimp, crabs, and crawfish; and fin fish, including tuna, cod, salmon, halibut, and tilapia. Some species and varieties are successfully cultivated, while many must be caught in the wild. Properly managed, most types of seafood are sustainable resources, but pollution of habitats and overfishing threaten many traditional fisheries, such as oysters and crabs in the Chesapeake Bay and cod in the North Atlantic. 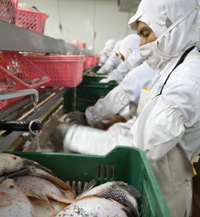 Seafood deteriorates rapidly after it is removed from water, so processing must occur quickly, as well. Some processing occurs aboard fishing vessels or factory ships that receive raw material from supporting fishing boats. The most common technique is chilling on ice or in brine to retard decomposition, but sorting by species and size and heading and gutting may also be performed.

Shellfish
Further processing, such as shucking shellfish and filleting fin fish may occur in shoreside plants capable of docking fishing boats. Shellfish last longest if merely cleaned and sold in their shells, but there is a market for the meat, as well, usually for further processing, such as in soups or breaded and fried products. Clams are washed and then shucked by exposing to flames, steam, or, more recently, high pressure. Mild heat kills the clam and causes the muscle that holds the shell closed to relax. High pressure also kills vegetative microbes, permitting sale of a fresh-like meat without cooking.

In one process, shells are ground up and separated by density in a salt brine, where the meat floats and the shell fragments sink. After washing, the meat may be sold in containers or frozen. In a case several years ago, a clam processor saved a significant amount of water and corresponding waste discharge by converting from using fresh water at every step to a counter-current reuse system in which fresh water was introduced to wash the final product and then used several times, finally to remove the mud from incoming clams, before being treated for discharge. Oysters are sold in the shell or shucked by hand.

Crabs and Shrimp
Many crabs are cooked and then sold chilled, while others may be sold live. There is a market for picked crabmeat, used in crab salad and as filling for more-elaborate fish dishes. The crabs are cooked in steam-heated retorts, and then the meat is picked by hand. Some is packed in cans and cooked again under relatively mild conditions.

Shrimp are the most popular seafood in the United States and are commonly sold as frozen tails with or without shells. Shrimp are categorized by size, expressed as the count/lb, with smaller values indicting larger shrimp. A common size is 41–50. Shrimp may be caught in the wild by net, but this source is vulnerable to overfishing and to natural forces, such as pollution and storms. Most shrimp in the U.S. now comes from aquaculture in Southeast Asia—Thailand, Viet Nam, China, and Indonesia. The warmer the climate, the faster the shrimp can grow. There are shrimp farms in the U.S. (in Texas and Hawaii), but the growth rate is lower compared with the rate in Asia. Labor costs are also lower in Asia, as well.

Another factor is the intensity of culture, expressed as crustaceans per square meter. In Asia, intensities can often exceed 100/m2, which then requires aeration, sometimes with pure oxygen; provision of formulated shrimp food; and the occasional use of antibiotics to combat diseases that spread quickly under such conditions. Shrimp really are comparable to insects and are vulnerable to pesticides that might be used on adjacent crops. Excessive use of artificial feeds may release nutrients to waterways. Ponds may need to use nets to protect the shrimp from birds. Marine shrimp prefer salt water, so ponds are usually located close to shorelines, which may require removal of mangrove stands.

In Honduras, where I recently visited courtesy of the Foundation for Investment and Development of Exports, a nongovernmental organization that promotes investment in the country, San Lorenzo-based Sea Farms International practices a low-intensity and sustainable form of shrimp culture. The company’s ponds, located in otherwise unusable salt flats beyond the mangrove zone, are stocked with 4–6 shrimp/m2. While some food is supplied, the ponds are essentially self-sustaining, using the naturally occurring algae and invertebrates. Disease is also less likely to spread under such low-density conditions.

One cost of production is refilling the ponds by pumping from the nearby estuary. The ponds are periodically re-graded while they are empty. Ponds are stocked with juvenile shrimp so the crustaceans mature at about the same rate. Otherwise, older shrimp may eat the eggs or larvae.

Sea Farms harvests shrimp by draining the ponds to a low point through nets that are then lifted by crane to a truck. The shrimp are taken to a plant for removal of heads and separation by size. The heads are removed by hand labor and are converted to fishmeal by milling and drying. The meal is used in animal feeds as a source of protein, but not in the feed used for shrimp. Tails are packed in ice in plastic totes that hold about 1,200 lb of tails and 600 lb of ice.

In one of the cleanest and most well-designed food plants I have seen, the tails are peeled by hand and then either frozen individually or packed in 5-lb boxes with a small amount of water and frozen as a block. Head-on shrimp are processed in a separate area because they have sodium metabisulfate added as a preservative, while the majority of products are chemical-free. Sea Farms also has its own version of "easy peel" shrimp, which are prepared by machine in Asia with a cut along the back. The Sea Farms version is cut on the belly by hand labor.

Tilapia
Aquafinca Saint Peter Fish S.A. is a Honduran firm operating a tilapia farm in San Francisco de Yojoa. The founder, Israel Snir, says the firm is the largest tilapia producer in the world. Tilapia is a versatile fresh-water fish, also called St. Peter fish because it is said to be the species caught in the Sea of Galilee in a significant Biblical episode. Aquafinca raises a hybrid of four parental varieties in ponds and then in cages located in two lakes. It takes about 8 mo to reach market size.

Like the shrimp-processing plant, the tilapia-processing facility in this developing country is about as fine a food plant as I have seen. Details of construction include epoxy-coated floors, fiberglass-reinforced polymer panel walls and ceilings, and stainless steel trim. Equally impressive are the sanitary precautions taken in both plants: Workers and visitors wear rubber boots and walk through deep sanitizing foot baths; all are robed, capped, and masked. Workers wear color-coded smocks designating where they belong within the plant. Work spaces are separated and kept refrigerated. It takes about one hour for a wriggling, live fish entering the plant to leave as two filets in a 10.3-lb corrugated box.

Fish harvested into tubs of water are dumped, outside the plant, into a water-filled hopper, from which they are conveyed into the plant. The fish are killed and bled by eight men with knives and promptly conveyed to tumbling scalers in which they finish bleeding. This takes about 15 min. A large group of workers, perhaps 100, then cut off the filet from each side of the fish and load them into a basket. The remaining carcass is removed to a tote and trucked to the on-site meal plant.

The filets are skinned by machine and put in another basket. These are conveyed to an adjacent room, where another large team trims them, removing pin bones. There is one quality assurance worker for every three trimmers. Reloaded into fresh plastic baskets, the inspected filets are immersed in chilling water and conveyed, submerged, to a third room.

Here they are inspected again and sorted by size and weight. Most are chilled by a 6-min passage through a belt freezer, while some are frozen by slower passage through the same equipment. At the exit, the filets are carefully loaded by weight into fresh plastic baskets, color coded by size. All of the contents of a given basket are placed in polymer foam shipping containers that have been pre-labeled with a color-coded tag corresponding to the basket color. The filets are stacked so that any remaining blood does not contact the flesh side of other pieces. Shipping is at 38–40° F and can take a few hours by air to Miami or two days by ship. The frozen product is mostly sold locally.

Almost as impressive as the technical excellence of the operation is the fact that the farm is self-sufficient in energy, making biodiesel and boiler fuel from the oil pressed from the carcasses and selling the meal for animal feed. The firm has established a credit union and operates literacy programs for its workforce, as well as many other social services.