According to the Food and Drug Administration, more than 160 foods can cause allergic reactions, and eight foods account for 90% of these reactions: milk, eggs, fish (e.g., bass, flounder, cod), crustacean shellfish (e.g., crab, lobster, shrimp), tree nuts (e.g., almonds, walnuts, pecans), peanuts, wheat, and soybeans. Because allergic reactions can be severe and life-threatening, Congress passed the Food Allergen Labeling and Consumer Protection Act of 2004. The law, which went into effect on January 1, 2006, requires that food labels identify whether a product contains any of these major food allergens or ingredients containing protein derived from them. 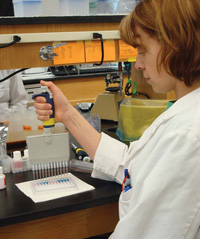 Since products not specifically formulated with these allergenic ingredients may still contain traces of them as a result of cross-contamination during processing—e.g., as a result of incomplete cleaning during changeover of equipment—food and beverage manufacturers and ingredient suppliers must therefore test for the presence of these allergens in their products.

• Swab kits are simple and easy to use. These methods yield qualitative results at 5 ppm and are often used to assess cleanliness of equipment surfaces. These tests are designed for in-plant use.

• Lateral-flow devices are convenient and easy to use, and users really like the approach, Taylor said. Where available, these tests are supplanting swab kits. However, they generally provide only qualitative results—indicating whether the product contains at least a threshold level of the allergen. For example, if a lateral-flow test is designed to give a positive or negative result at a level of 5 ppm and the dipstick shows a line indicating the presence of the allergen, you won’t know whether the allergen is present in the sample at 5, 7, 10, or 25 ppm. The line appears faster, however, if the level is higher.

And test kits are not yet available for all allergens, he added. “It’s not as easy as it might seem to develop lateral-flow tests for certain allergens, such as milk and peanuts.” He said that companies began coming out with test kits for residues of allergens several years ago. “We have reasonably decent test methods for major allergenic foods that companies want to test for,” he said. “New tests are being developed for other, minor allergens, e.g., mustard, but they have a much more limited market.”

Two other testing approaches, Taylor said, are polymerase chain reaction (PCR) and ATP. PCR detects DNA rather than protein, so it is considered less relevant for detection of allergens, which are protein residues. It also is not easily quantified. ATP methods are widely used and effective for the assessment of sanitation, since they detect residual soil very easily, but ATP levels may not correlate with allergen levels. Nevertheless, Taylor said, inexpensive ATP tests can be used as a first-pass system, but if ATP is negative, then specific allergen testing should be done.

Challenges Ahead
Taylor said that several challenges lie ahead. One is harmonization. Different test kit companies might use different criteria for judging the success of their methods, and the user might not know which test works best for their purposes. Another challenge, Taylor said, is obtaining consensus on threshold levels, setting a baseline for analytical sensitivity for these tests. FDA has talked about setting threshold levels for allergen tests but hasn’t yet. FDA’s Threshold Working Group in 2006 issued a report titled “Approaches to Establish Thresholds for Major Food Allergens and for Gluten in Food” (www.cfsan.fda.gov/~dms/alrgn2.html) and published an article of the same name in the May 2008 issue of Journal of Food Protection. The report and article provide an excellent discussion of the topic.

A third challenge, Taylor said, is the fact that we don’t yet have good methods for some allergens. For example, it is very difficult to develop a soybean test, since different forms of soy proteins, such as soy protein isolate and soy protein concentrate, differ immunologically, and all forms of soy are being used by the food industry. Another problematic allergenic food is fish. There are many different species, and the allergenic proteins differ with the species.

We’re also missing tests for some minor tree nuts: pistachio, Brazil, macadamia, and pine nuts, he added. His laboratory has developed ELISAs for almond, hazelnut, walnut, peanut, cashew, and pecan, but only the almond and hazelnut tests are available in commercial kit form. His laboratory is the only one that offers tests for the other tree nut allergens.

Another key question, he said, is which commercial test kit is best for a food company’s needs. For example, for testing milk, the kits available from three major suppliers differ in what they test for. Neogen Corp. tests for both casein and whey; r-Biopharm has separate tests for the key milk fractions casein and the whey protein beta-lactoglobulin; and ELISA Systems tests for casein but not whey. Depending on the application, one or the other might be best.

Whether a test kit for some of these allergens will be developed is really a financial consideration, Taylor said. First, is it worth the investment to have a graduate student devote several years to develop an immunoassay with a limited market? And second, even if a test kit for a minor allergen is developed, it might not be in high-enough demand to make it worthwhile for a company to commercialize it.

Harmonization Activities
Samuel Godefroy ([email protected]), Director of the Bureau of Chemical Safety at HealthCanada’s Food Directorate and Cochair of AOAC International’s Presidential Task Force on Food Allergens, said that his task force—consisting of representatives of regulatory agencies in the U.S., Canada, Japan, Australia, and New Zealand, test kit manufacturers, and others with food industry expertise—expects to complete development this month of a harmonized validation protocol for ELISA-based methods to determine food allergen markers. The document will provide guidance to manufacturers of test kits on how to design and validate their studies and submit the results for acceptance as an AOAC official method. 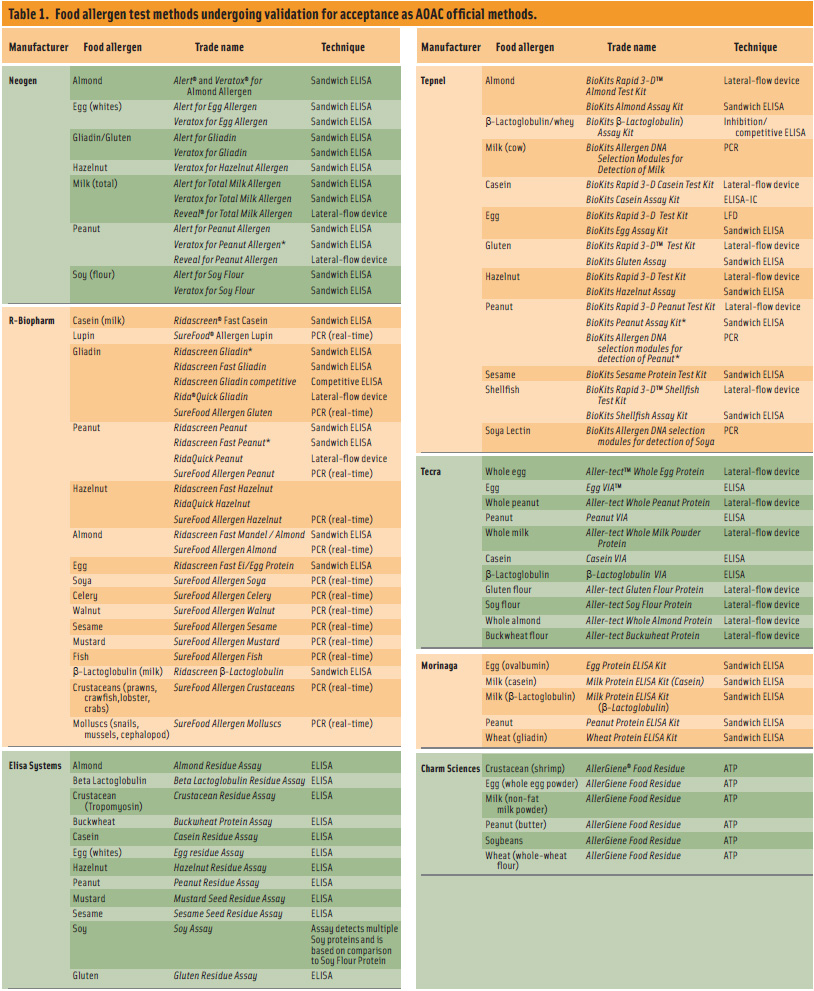 Another international effort on harmonization is being conducted by the MoniQA Network of Excellence (www.moniqa.org), a European Union–funded network of more than 30 partners whose goal is to make food safer by harmonizing methods for food analyses. MoniQA (for “monitoring and quality assurance in the food supply chain”) was organized last year and will hold its 1st International Conference, “Increasing Trust in Rapid Analysis for Food Safety and Quality,” on October 8–10, 2008, in Rome, Italy. Details are available at www.moniqa.org/rome2008.

• Almonds. Researchers at the National Center for Food Safety and Technology, Summit-Argo, Ill., studied ways to improve the extraction of almond proteins from processed foods to improve ELISA accuracy. They determined that combining temperature with sonication increased the total amount of protein extracted.

• Buckwheat. Researchers at the University of Nebraska, Lincoln, have generated highly specific polyclonal antibodies against buckwheat for use in sandwich ELISAs for detection of undeclared buckwheat residues in food. Buckwheat is used in Western countries as a substitute for wheat flour for gluten-sensitive subjects, but recent studies indicate that some buckwheat proteins are potent allergens.

• Corn. Researchers at the University of Nebraska, Lincoln, stated that reports of allergy to corn are rare but a number of people experience significant reactions to corn lipid transfer protein. The researchers concluded that this protein is localized in the outer pericarp of corn grain and suggest that removing the seed coat and pericarp may lower the risk of allergy.

• Fish. Researchers at Florida State University, Tallahassee, used non-competitive indirect ELISA to examine the immuno-reactivity of soluble proteins extracted from 51 common species of cooked food finfish, 3 types of shellfish, and 13 species of meat and poultry to anti-parvalbumin antibodies. They found that MAb 3E1 is specific to fish parvalbumin, which would be a useful probe for the detection of the major fish allergen in processed food.

• Milk. Researchers at Alabama A&M University, Normal, studied the use of pulsed ultraviolet light—a nonthermal technology that has been shown to inactivate peanut allergens—to reduce allergens in cow’s milk and concluded that it has the potential to reduce the allergenicity of milk.

• Mustard. Researchers at the University of Nebraska, Lincoln, have developed and validated a specific and sensitive ELISA for the detection and quantification of mustard residues in foods.

• Soy. Researchers at Alabama A&M University, Normal, and the U.S. Dept. of Agriculture’s Southern Regional Research Center, New Orleans, are studying the use of pulsed UV light to reduce the allergenicity of soybeans, since the allergens are thermostable and traditional thermal treatments are ineffective.

by Neil H. Mermelstein,
a Fellow of IFT, is Editor Emeritus of Food Technology
[email protected]