Whole grain consumption is on the rise. According to information from the Whole Grains Council, Boston, Mass. (phone 617-421-5500, www.wholegrainscouncil.org), new product launches of foods making a “whole grain” claim have grown sharply since 2000. “In 2007, nearly 15 times as many new whole-grain products were introduced worldwide as in the year 2000,” reports the Mintel Global New Products Database. In addition, by tracking restaurant menus across the country, Mintel Menu Insights identified the top eight restaurant trends for 2008, with “Grain Goodness” as No. 4. 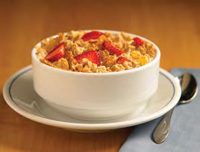 This rising interest is due, in part, to increased consumer awareness of whole-grain health benefits. According to the International Food Information Council’s 2007 Consumer Attitudes Toward Functional Foods/Foods for Health, consumers named whole grains and fiber as two of the top six foods or components that they were aware of with health benefits. The benefits they associated with whole grains related to cardiovascular and intestinal health.

According to the Whole Grains Council, the benefits of whole grains most documented by repeated studies include stroke risk reduced by 30–36%, type 2 diabetes risk reduced by 21–30%, heart disease risk reduced by 25–28%, and better weight maintenance. Nettleton et al. (2008) showed that whole-grain consumption lowered heart failure risk in an observational cohort study of 14,153 African-American and white adults. Katcher et al. (2008) showed a significantly greater decrease in C-reactive protein (CRP) and percentage body fat in the abdominal region in obese adults consuming whole grains than in those consuming refined grains. CRP is an inflammatory marker for cardiovascular disease.

Whole grains contain many components that contribute to their nutritional benefits: dietary fiber, vitamin E, magnesium, sterols, lignans, polyphenolics, and carotenoids. Specific whole grains, from the mainstream to the niche, vary in nutritional profile and offer particular benefits. Here is a look at a few of those grains and the benefits that they provide.

Amaranth
This grain boasts a higher level of protein (16%) than others. It also has no gluten. It is gaining in popularity, appearing in more commercial products such as World of Grains™ cookies from Mars Health and Nutrition, Hackettstown, N.J. (phone 800-207-4548, www.mars.com). The cookies are a blend of eight whole grains: amaranth, brown rice, buckwheat, millet, oats, quinoa, rye, and wheat. Available in Oatmeal Raisin, Cranberry, Blueberry, and Multigrain flavors, a single serving offers 15 g of whole grains.

“These grains were chosen for their exotic appeal, as well as for their functionality, appearance, flavor, and nutrition,” says Elizabeth Arndt, Director of Research & Development, ConAgra Mills. “Compared to wheat, the Ancient Grains also tend to be higher in lipid and mineral content, particularly amaranth, millet, and quinoa.”

Arndt explains that like other grains, Ancient Grains provide protein, fiber, vitamins, minerals, and antioxidants, along with higher protein levels in amaranth and increased calcium levels in amaranth and teff. “Each flour has a unique flavor, from the slightly sweet grain flavor of teff to the lightly nutty, earthy profile of quinoa. The individual flours and blends make it possible to add these grains to almost any application where flour would be used.” She notes that there is also increasing interest in using the Ancient Grain flours and five-grain blend in gluten-free product applications.

Barley
Barley’s fiber content contributes to its cholesterol-lowering properties. In 2005, the Food and Drug Administration authorized the use of a health claim for the role of beta-glucan soluble fiber from barley in reducing the risk of coronary heart disease. To qualify for the health claim, a food made from sources such as whole-grain barley, barley bran, or barley flakes, must contain at least 0.75 g of barley beta-glucan soluble fiber/serving.

Brown Rice
In May 2008, FDA extended the existing whole-grain health claim to include brown rice. The claim states, “Diets rich in whole grains and other plant foods and low in total fat, saturated fat and cholesterol, may help reduce the risk of heart disease and certain cancers.”

Oats
Oats are a mainstream whole grain whose heart health benefits are widely accepted, thanks to oat beta-glucan. According to the Whole Grains Council, recent research reports indicate that oats also have a unique antioxidant, avenanthramides, that helps protect blood vessels from the damaging effects of LDL cholesterol. In addition, Andon and Anderson (2008) discussed how oats may also help control the risk of diabetes, weight gain, and high blood pressure.

Quinoa
Commercially, quinoa is now appearing in cereal flakes and other processed foods. It is a small, light-colored round grain, similar in appearance to sesame seeds. Quinoa is a complete protein, containing all the essential amino acids.

Rye
Rye is unusual among grains for the high level of fiber in its endosperm, not just in its bran, says the Whole Grains Council. Because of this, rye products generally have a lower glycemic index than products made from wheat and most other grains, making them especially healthy for diabetics.

Teff
It is estimated that teff is the principal source of nutrition for more than two-thirds of Ethiopians, who make it into the ubiquitous spongy injera flatbread, according to the Whole Grains Council. Today, it is getting more attention for its sweet, molasses-like flavor and its versatility. Teff has more than twice the iron of other grains and three times the calcium.

Seeds of Change
• Chia seeds. These are an excellent source of omega-3 fatty acids (alpha-linolenic acid), antioxidants, and fiber. Their omega-3 fatty acid stability is a result of the natural antioxidants content, according to information from Chia Farms, Sonoita, Ariz. (phone 520-455-5151, www.eatchia.com). When added to animal diets, chia seed supplementation resulted in a dramatic reduction (up 30.6%) in the saturated fatty acid content of the products produced. Ayerza and Coates (2007) showed that chia seed diets improved the omega-6:omega-3 fatty acid ratio in male Wistar rats.

• Hemp Seeds. Market research obtained by the Hemp Industries Association, San Francisco, Calif. (phone 707- 874-3648, www.thehia.org), shows that hemp food sales grew by at least $3.4 million to a total of $9.7 million from December 2006 to December 2007. The sales data, collected by the market research firm Spins, was obtained from natural food retailers only, excluding Whole Foods Market and mass-market food and pharmacy stores and thus under-represents actual sales by a factor of two to three. HIA estimates that the total value of annual sales of hemp foods in the United States is in the range of $20–30 million.

• Flaxseed. This grain boasts a high alpha-linolenic acid content, about 1.8 g of ALA/tbsp of flaxseed. It is loaded with dietary fiber, with a range of soluble (20–40%) and insoluble (60–80%) fiber, according to AmeriFlax, Bismarck, N.D. (phone 701-663-9799, www.ameriflax.com). The fiber portion of flaxseed contains high levels of lignans, which have been associated with a reduction in hormone-dependant cancers, such as colon, breast, and prostate cancer. For example, a study funded by the National Institutes of Health showed a 30–40% slower cancer cell growth rate in prostate cancer patients taking 30 g of ground flaxseed/day for 30 days (AmeriFlax, 2007).

• Sunflower Seeds. These seeds are packed with healthy fats, protein, fiber, minerals, vitamin E, and phytochemicals. Sunflower seeds are the best whole-food source of vitamin E, according to the U.S. Dept. of Agriculture Nutrient Database. One ounce of oil-roasted sunflower seeds provides 76% of the RDA for vitamin E, according to the National Sunflower Association, Bismarck, N.D. (phone 701-328-5100, www.sunflowernsa.com). In addition, Phillips et al. (2005) indicated that of the nuts and seeds typically consumed as snack foods, pistachios and sunflower kernels had the highest level of phytosterols at 270–289 mg/100 g).