The incessant beat of the tom toms heralding the imminent arrival of biologically derived food packaging materials and structures is heard—actually, read—every day on our virtual communications network called the Internet. Sustain the environment, use our terrific new invention discovered in the remote jungles abutting the Amazon or the upper side of Mount K2 and tested by the government package laboratories of Antarctica. This column has dutifully reported on many of the announcements, as difficult as it might be to comprehend and download each, tracing its source and verifying the claimed results. Recall our January 1995 Food Technology column in concert with the world’s leading expert on the topic of bio packaging films, John Krochta of the University of California, Davis. 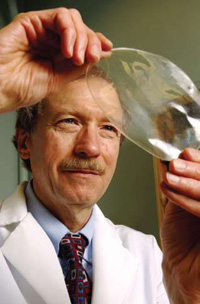 By no small coincidence, the IFT Food Packaging Division honored John during the Annual Meeting & Food Expo® this past June with the Riester-Davis Award, food packaging’s premier accolade for lifetime achievement. Accomplishment and professionalism are the chief criteria for the Riester-Davis Award, and John Krochta’s long and distinguished record is a true reflection of what our founders envisioned as our divisional mission. Each year, the recipient is asked to deliver a brief talk on his lifetime and his vision of the future. This year’s lecture was possibly just a touch more relevant than those of prior honorees because it hit on the contemporary evaluation of biologically derived package materials and structures. With John’s implicit permission, I am extracting the essentials to amplify the drumbeats we are hearing so that we all might learn from a master.

In mapping out a career, said John in his Riester-Davis Award acceptance address, it is possible to consider it from different perspectives, e.g., the presence of a particular area of scholarship, work done on certain problems, the impact of people on personal decisions along the journey, or the different stages of a person’s career.

For his Ph.D. research, John was drawn to the problem of poor efficiency of plant protein utilization due to low levels of certain essential amino acids.

One approach being explored was synthesizing these amino acids and adding them to the plant protein to increase its quality. However, only one of the optical isomers that result from synthesis has biological activity and usefulness. The best approach is to separate the optical isomers and recycle the non-active isomer back into the synthesis process. This experience sensitized John to: a) the critical importance of molecular structure to properties and function of polymers; and b) the importance of the efficient use of resources.

John’s teaching and research at UC Davis have been greatly formed by his chemical engineering education and experience with food harvesting and processing with the U.S. Dept. of Agriculture Agricultural Research Service Western Regional Research Center (USDA/ARS/WRRC.) In particular, his experiences with polymer science, source reduction, and sustainability exerted a great influence on his interest and research in the area of edible films.

Although his edible film research has focused on the use of whey protein separated from the by-product cheese whey, the principles are applicable across all biologically based food package materials. John’s basic research has involved exploration of the relationship of film composition and molecular structure to film properties and function. The applied research has emphasized matching the properties of the films to appropriate applications that result in reduction of conventional packaging or replacement of less environmentally friendly coatings.

Projects initiated, managed, and/or conducted by John have focused on the following areas.

• Protein Structure Effects on Film Properties. Whey protein consists of a number of proteins, all globular. Heat provides the energy necessary to partially open the globular proteins, break internal hydrophobic interactions and di-sulfide bonds, and present the opportunity for the individual protein molecules to form intermolecular cross-linking bonds. Films made from heat-denatured whey protein are stronger, more stretchable, tougher, and better oxygen barriers than films made from native whey protein.

• Plasticizer Effects on Film. As with so many biologically sourced “plastics,” whey protein films are too stiff and brittle without the addition of a plasticizer to mediate hydrogen bonding among protein chains. But again, as appears to be common among bio-films, the improvement in mechanical properties usually comes at the cost of increased oxygen permeability, almost always an undesirable property. However, UC Davis research has shown that plasticizer composition, size, and shape produce widely different relative effects on mechanical and barrier properties, suggesting some promise along these lines.

It’s interesting that the first of the major commercial “plastic” films were cellulose-based, e.g., cellophane, cellulose acetate, etc. However effective they were before and immediately following World War II, before far more functional hydrocarbon polymers entered the scene, cellulose package materials were rapidly supplanted because of their disconcerting deficiencies—paucity of barrier, vulnerability to environmental conditions, and cost. Their recent resurrection is due to the desire to identify structures that are “sustainable.” Is that at the expense of functionality?

• Oxygen-barrier coatings for nuts. Application research at UC Davis has included both pan coating and fluidized bed coating of nuts with whey protein–based formulations. The result has been significant reductions in the rate of oxidative rancidity. Nuts with an oxygen-barrier coating provide a good example of how such a coating might provide opportunity for reducing the amount of conventional packaging required, e.g., by eliminating the need for an oxygen-barrier layer in a flexible pouch.

• Gloss coatings for confectionery products. Other applications research has explored the use of panning for forming whey protein films as coatings on sugar-shell confections. One target has been replacement of existing ethanol-based coatings that engender problems with worker safety and air pollution. The researchers have found that whey protein coatings can match the gloss and produce better oxygen barriers than traditional ethanol-based coatings such as shellac. The closer to the product the protection is, the better, leading to the possibility of reduced-property package structures.

• Integrity-enhancing coatings for fragile foods. Some freeze-dried foods disintegrate during handling and transportation due to their fragile nature. Forming whey protein films as coatings on these foods significantly reduces the tendency of the structures to be disrupted, thus overcoming one challenge of primary packaging—how to maintain product integrity through distribution.

• Oil-barrier coatings for fried foods. Whey protein films are excellent oil barriers. Application research has shown that this attribute can be translated into coatings for fried foods that reduce oil uptake by more than 30%. With “grease-resistant” paperboard additives under investigation for possible adverse health issues, reduction in migrant fat content of the contained product might function symbiotically with the newer spectrum of “fat-barrier” package materials.

Research Agendas
Sometimes, an outsider might ponder if the raw material interests are dictating the research. To date, of course, for practical purposes, no significant wholly bio-based package material has evolved from all of this activity. Might some of the challenge be the multiplicity of conflicting “solutions” proposed from the different raw material agendas and subsequent dilution of effective research?

Major themes running through John’s research have been environmental stewardship, particularly reducing waste; increasing utilization efficiency of resources; and developing sustainable processes and products. So if you seek an expert in biological package materials, call him. But, much more importantly, if you seek the consummate professional, look no further than John Krochta.