Of the significant transport processes—heat, mass, and momentum—heat transfer is often of greatest interest to food processors. Thermal processing—heating foods to sterilize them—speaks for itself. Other examples include dehydration, freezing, cooking, evaporation, frying, freeze-drying, and cooling. In each of these, transfer of energy into or out of food determines rate, costs, and quality. 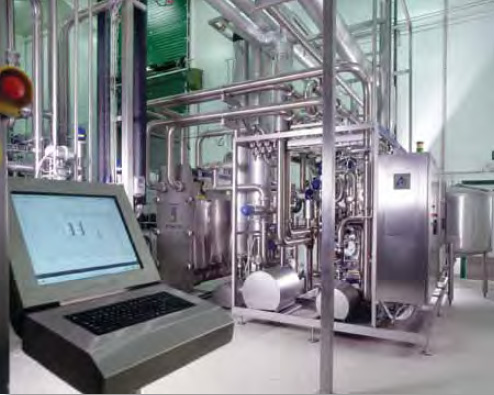 Most people have an intuitive understanding of the law of thermodynamics that says that energy moves from a region of high temperature to one of lower temperature. They may also grasp that materials differ from one another in some property that affects how they conduct heat and therefore how they feel to the touch. Metal, glass, and stone feel cool while wood, plastic, and paper feel warm by comparison, all supposedly at the same temperature. Why is that?

Also intuitive is the observation that stirring a cup of coffee or bowl of soup seems to cool it faster. We all know it is cooler in the shade on a sunny day. Each of these commonplace observations reveals a fundamental fact about heat transfer. Engineers quantify these phenomena to make predictions and calculations useful in design of equipment and processes. Non-engineers can benefit from some understanding of the mechanisms of heat transfer as they assist in troubleshooting and interact with designers and operators.

Conduction Heat Transfer
Conduction refers to the movement of energy within a substance that is at rest, that is, not moving. While the bulk of the material is at rest, the molecules and atoms of which it is composed are restless. They are constantly moving and colliding with each other and with their surroundings. Their average velocity may be zero, but the absolute value of their velocity is a function of the temperature. The average is zero because motion in one direction cancels the motion in the opposite direction. Collision of one atom or molecule with another at a different energy level results in transfer of energy from one to the other. Thus, if a bar of copper is heated at one end by a flame, for instance, it is not very long before the other end is too warm to hold in a bare hand. Energy from the flame has moved along the bar as atoms of copper collide with one another.

Copper is a good heat conductor. If the bar had been wood, a bare hand could have held it until the flame reached the holder, because wood is a poor conductor of heat. Poor conductors of heat are insulators, and have their valuable uses.

The intrinsic property of materials that describes how good or poor a heat conductor they are is the thermal conductivity, symbolized as k, with units in the SI (metric) system as watts/meter degree K (W/m K). Copper has a value at room temperature of 386 while wood has a value of about 0.1 in these units, according to a table in Introduction to Food Engineering (Singh and Heldman, 2001).

Without belaboring the mathematics, it is important to know that the rate of heat flow through a material by conduction is proportional to the temperature difference, known as the driving force, the cross sectional area, and the thermal conductivity, and inversely proportional to the thickness or length of travel.

Conduction heat transfer is important in canning of solid foods, baking, cooking of meats, freezing, and the specification of insulation for freezers, among others. Calculation can become complicated when several materials are involved in layers, when the properties are changing, as in drying, and when phase changes are involved, as in freezing.

Convective Heat Transfer
Convective heat transfer involves the physical movement of a fluid (liquid or gas) in contact with a solid or liquid surface. The fluid and the surface need to be at different temperatures for transfer of energy to occur. The rate of transfer is proportional to the temperature difference, as in conduction, but because the transport of energy is in packets of fluid, as compared with atomic or molecular contact, the rate of transport to the surface can be much greater. Transfer from the surface onward is usually by conduction if the surface is of a solid. Transfer may be by conduction or convection if the surface is of a liquid.

The rate of heat transfer is also proportional to the surface area and to a coefficient, symbolized by h, with units of watts/square meter degree K. Motion of the fluid may be because of density differences, due to temperature differences, in which case it is called natural convection. Alternatively, the motion may be induced by mechanical means, such as a pump or fan. This is called forced convection.

Convective heat transfer coefficients are complex functions of various properties of the fluid (viscosity, density, thermal conductivity, specific heat), velocity, and geometry. In general, heat transfer rates, as indicated by the coefficient, are higher for high velocities, lower for high viscosity, and higher when the surface is rough.

Besides tubular heat exchangers, there are wiped-surface heat exchangers, in which a rotating blade moves viscous fluid past a heated or cooled surface. These are common in aseptic processing and for ice cream freezers. Other devices use embossed patterns on the tube surface to improve the heat transfer coefficient.

Frying
Frying is a special case of convective heat transfer in which foods such as battered chicken pieces, cut slices of potatoes, and other foods are immersed in hot oil. The process is complex, but often water in the food evaporates and is replaced by oil. Fried snacks can contain as much as 30% oil after frying.

Frying is a special case of convective heat transfer in which foods such as battered chicken pieces, cut slices of potatoes, and other foods are immersed in hot oil. The process is complex, but often water in the food evaporates and is replaced by oil. Fried snacks can contain as much as 30% oil after frying.

Color is developed from browning reactions at the relatively high temperature, and texture becomes crisp because of the water removal and thermal reactions on starches and proteins.

In an effort to reduce calories of fried foods, processes have been developed to reduce the retained fat. One approach is to blow the products with superheated steam after draining. Another is to use an edible but indigestible fat, sucrose polyester. SpinFresh, Kelowna, British Columbia (phone 250-764-1796, www.SpinFresh.com), uses centrifugal force to remove excess oil above the fryer, returning the oil to the fryer, according to Rory Millikin, President. Current models are intended for foodservice applications.

Radiation
Radiation heat transfer occurs by the emission and absorption of electromagnetic energy. It does not require a medium between the source and sink; in fact, it can occur in a vacuum. The rate of heat transfer is proportional to the difference of the fourth power of the absolute temperatures of the source and sink. (Absolute temperature is equal to temperature in degrees Celsius or Centigrade plus 273, and is symbolized by K.) The rate is also proportional to the surface area, the Stefan-Boltzmann constant (5.669 x 10–8 watts/square meter K4), and the emissivity. (Stefan and Boltzmann were, respectively, the physicist who discovered the law governing radiative energy transfer and the theoretician who explained it.) Emissivity refers to a surface’s comparison to a theoretical black body, which has a value of 1.0. Ice and water have values close to 1, while polished metal surfaces have low values.

Rates of radiative heat transfer also depend on relative shape factors and the sight lines between source and receiving surface, because electromagnetic waves travel in a straight line. Emissivity is a function of wavelength, which is a function of temperature. Some wavelengths, such as microwaves, can penetrate and be absorbed by certain substances, while others are transmitted without being absorbed, such as radio waves through brick walls. The most effective wavelengths for transmission of heat are infrared and are typically generated by hot sources, such as surface burners, resistance electric wires, and hot surfaces, such as the walls of an oven.

In a typical oven or dryer, heat transfer involve all three major mechanisms— convection from circulating hot combustion can gases, conduction from a metal belt or pan and also within the internal part of the food, and radiation from the burners and hot surfaces. Because dark surfaces absorb radiation better than light surfaces, color development in baking, for instance, can become self-reinforcing, as dark areas absorb even more energy and become darker.

Understanding a little about the mechanisms of heat transfer can help explain phenomena encountered in real processes and why equipment is designed as it is.