Ultrasonic processing is the application of sound waves in the frequency range of 20 kHz—1 Mhz, which is above the threshold of human hearing, according to a useful review in Food Engineering Reviews (Bhaskaracharya et al., 2009). Lower frequencies are associated with higher power levels, resulting in physical effects, while higher frequencies have lower power and are used for diagnostic imaging. Intermediate frequencies with medium power level can lead to free radical formation with effects on solution chemistry. 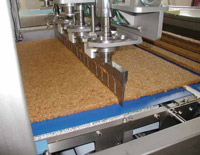 Several international firms offer off-the-shelf and customized systems and components for applying ultrasonic energy in a variety of practical applications.

Mechanism of Action
The primary mechanism by which ultrasonic energy is transmitted is cavitation, which is caused by the rapid formation and collapse of microscopic bubbles in a liquid. Ultrasonic energy is created by the formation of pressure waves. As the low pressure phase of a wave arrives at a location, bubbles form around nuclei. The immediate following high pressure phase promotes the bubble collapse, and the process repeats, tens of thousands times a second. It is estimated that temperatures in the bubble can reach 5,000 K and pressure can exceed 1,000 atmospheres. These are extreme conditions, leading to very high shear forces and the formation of free radicals, which are chemically reactive.

Most of the physical effects of ultrasonic processing are attributed to the shear forces created by cavitation. Some examples include cleaning of surfaces, emulsification of oil and water, and cell disruption. Some other observed effects are more difficult to explain. For example, ultrasonic processing appeared to improve aging of rice wine but not maize wine, according to work cited in the previously mentioned review. Ultrasonic energy also reduces the apparent viscosity of fluids, sometimes permanently, other times temporarily. This effect results from breaking up aggregates or cleaving of macromolecules.

Components of an Ultrasonic Processing System
The components of an ultrasonic processing system include a frequency generator, a transducer, and a sonotrode. Transducers can be piezoelectric or magnetostrictive. A piezoelectric device converts a cyclic electric current into physical vibrations, while a magnetostrictive device converts a varying magnetic field into physical vibrations, in both cases by using specific crystals with special properties. Most commercial systems use piezoelectric transducers because they are more easily scalable.

The sonotrode or probe is the component that is in contact with the medium, usually liquid. Sound waves are attenuated rapidly in air so most applications occur in fluids. Most sonotrodes are fabricated from titanium because it is light in mass and very rigid. The low mass means more energy is transmitted, while the rigidity means less deflection and fatigue. Nonetheless, sonotrodes are wear parts and need to be replaced periodically. Some probes are shaped like knives for cutting sticky or fragile materials; others are nozzles through which liquids are sprayed or dies through which pastes are extruded.

Supplier Overview
There are several international suppliers of systems and components, which compete in some areas while focusing in some different areas as well. Most offer white papers as well as case studies on their websites. Each is described here along with what seems to be the company’s special interest.

• Cavitus (www.cavitus.com) is an Australian firm. The company has developed a system for cleaning and sanitizing wooden wine barrels, a process described in a column that appeared in the March 2007 issue of Food Technology. Cavitus also offers one of the few ultrasonic applications in air—a system for reducing foam while filling beer and carbonated beverages. Sound waves are focused on the foam and cause its collapse. The foam limits filling speed because it prevents complete delivery of the desired volume of liquid. Cavitus claims dramatically improved filling rates and also describes improved extraction of juice from fruits and vegetables and of oil from seeds. Finally, Cavitus describes improved heat and mass transfer in food processing using ultrasonics.

• Innovative Ultrasonics (www.innovativeultrasonics.com) is related to Cavitus, but seems to focus on new applications requiring custom design. The company cites separation by agglomeration of particles at pressure nodal points (achieved by establishing standing waves in a vessel) and improved screening by disrupting boundary layers on screens and filters. Promising ideas mentioned include enzyme and microbial inactivation by cellular disruption, improved fermentation by improved mass transfer and carbon dioxide removal, and acceleration of heating, cooling, and drying due to improved heat transfer.

• Telsonic (www.telsonic.com) is a Swiss company that offers several complete systems that seem appropriate for development and even production scale. The company describes applications in crystallization, where cavitation serves to nucleate fine crystals; particle disintegration; mixing and homogenization; and water treatment. In the last case, ultrasonics supplements UV radiation or ozone treatment. Telsonic’s equipment is also used to seal lids on plastic packages.

• Branson (www.Branson-PlasticsJoin.com) is a Connecticut firm that has focused on ultrasonic welding of thermoplastics, but also supplies systems for cutting and slitting sticky materials. Branson’s systems are designed to be easily cleaned. Applications include candy, cake, gum, and pizza.

• Dukane (www.dukane.com), St. Charles, Ill., appears to focus on food cutting, supplying generators, converters, and blades. The company’s materials emphasize the extended runs that customers experience due to longer times between cleaning for the ultrasonic blades.

The company also offers a unique application for detecting leaks in bottles and cans containing carbonated beverages. The system works by applying a special sonotrode to each container, stimulating carbon dioxide to escape from solution and increase pressure inside the container. If the container leaks, liquid will spray out and the container can be removed.

Hielscher supplies the sonotrode, but other suppliers must provide the leak detection equipment. Some other applications cited by Hielscher include both activation and inactivation of enzymes and cells, degassing, dispersion of dry powders in liquids, and enhanced oxidation.

Additional Research and Applications
Researchers at the University of Valencia (Mulet et al., 1999) reviewed applications of low intensity ultrasonics for measuring the quality of food products or to monitor a process. For example, in process monitoring, ultrasonics can measure liquid level or flow rate. In the lab, ultrasonics can determine physical and chemical properties of foods.

Examples are measurement of texture, composition, and physical state in liquid and solid foods. The commonly measured ultrasonic parameters are velocity, attenuation, and frequency spectrum composition. Velocity is the simplest and most reliable measurement and is directly related to density. In the ultrasonic equivalent of computed tomography, a three dimensional picture of a food structure can be constructed.

Researchers at Bogaziçi University in Turkey (Ince and Belen, 2001) studied the effect of added solids in disinfecting water with ultrasonics. Suspensions of E. coli in water were treated with equivalent weights of ceramic, metallic zinc, and activated carbon powders. Total coliform count was monitored and times for 50% kill were compared. Activated carbon powder was most effective in accelerating kill. The effect faded with increased sonication time and reduced number of bacteria, probably because of the combined effects of reduced probability of bacterial contact with the solid-liquid interface and reduced cavitation because of degassing.

Ultrasonics remains an exciting and somewhat underutilized technique for food processing. There are practical limits to the scale of available equipment, so larger volumes require multiple modules. The equipment is relatively simple, safe, and fairly easy to understand and operate. A promising approach is to combine unit operations, such as juice extraction and size reduction or dispersion and heat transfer. Ultrasonically vibrating an extrusion die to increase throughput is a good model example of such a combination. Increased application of ultrasonic imaging and measurement using lower power ultrasound is another promising topic for research.

In addition to the suppliers mentioned here, there undoubtedly are others with their own perspectives and offerings. The challenge is to imagine and then commercialize new applications of this versatile technology.