James Oxley, Senior Research Scientist in the Dept. of Microencapsulation & Nanomaterials at Southwest Research Institute in San Antonio, Tex. (www.microencapulation.swri.org)—an organization that provides contract research on encapsulation and micronization projects and investigates new encapsulation concepts and improvements to existing technologies—said that about two dozen microencapsulation techniques are being used to encapsulate everything from flavors to active ingredients such as leavening agents and nutrients. 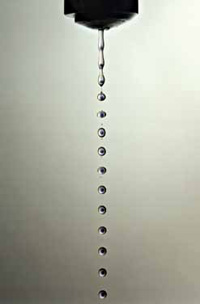 It all started, he said, with encapsulating flavors. Most flavors are oils, so for inclusion in a dry product such as a baking mix, they need to be encapsulated to get them into a powder form. The majority of powdered flavors used in products ranging from snack chips to dry mixes are spray dried with starches or other carriers, he said.

Spray drying accounts for 90% of encapsulated flavors. Spray chilling (also known as prilling) involves atomization of molten wax or fat into a chilled chamber. Fluidized-bed coating and pan coating are used to apply a coating to solid particles; the particles are suspended in a bed of air, and a coating solution is sprayed on. Coextrusion is the encapsulation of liquid droplets through the use of a concentric nozzle system to form an annular jet; the annular jet breaks into core-shell droplets, and the outer droplet subsequently dries, gels, or cools to form a shell. Coacervation, interfacial polymerization, sol-gel, and in-situ polymerization consist of forming a shell around oil droplets dispersed in an aqueous solution. Micelles, liposomes, and microemulsions (nanoencapsulation) encapsulate active ingredients through the stabilization of oil-in-water emulsions through the use of surfactants, lipids, and other colloidal stabilizers. Cyclodextrins are commonly used to form molecular complexes with hydrophobic active ingredients.

The capsule may protect the contents (the payload) against oxygen and water. Fish oil, for example, can be encapsulated for inclusion in such products as baked goods, dry mixes, and beverages, but since fish oil oxidizes rapidly, the challenge is maintaining an acceptable flavor and odor in the product.

The capsule must also protect against heat, which accelerates the diffusion of oxygen and water. Since pasteurization or retorting often destroys the capsule, it is difficult to apply classical emulsification techniques and formulations to products that will be thermally processed. Heating any kind of hydrocolloid greatly increases the hydration and diffusion rate of water, oxygen, or possibly bioactives through a shell, he said.

The capsule must also retain the clarity of beverages the encapsulated material will be added to. This is, in part, a function of particle size and refractive index. Encapsulation may also be used to separate two reactive ingredients, mask taste, and improve bioavailability. There’s no one encapsulation method for all materials, Oxley said. It all depends on the application. 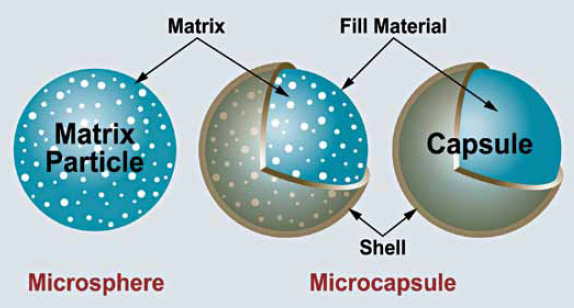 For an encapsulated vitamin, general testing would involve consumer taste tests and product analysis before and/or after production and storage testing, while the true efficacy test would be measuring absorption into the body and proving that the encapsulated ingredient is absorbed more (provides increased bioavailability) than the unencapsulated ingredient. Bioavailability testing is typically done by animal or human trials to measure levels of the active ingredient within a subject after consumption of an active ingredient.

Various methods can be used to measure the efficacy of encapsulation, Oxley said. The first step is to assay for the encapsulated ingredient. How much ingredient a capsule contains can be determined by extraction and chemical analysis by such methods as high-performance liquid chromatography, gas chromatography-mass spectrometry, and thermal analysis. There are also standard physical and chemical techniques.

X-ray diffraction is used to measure porosity. Zeta-potential analyzers measure surface charge, which helps to determine the stability of particles suspended in a solution. Thermogravimetric analysis measures the thermal stability of an encapsulated formulation or determines the solvent or water weight of a capsule. Differential scanning calorimetry quantifies phase changes, such as melting point or glass-transition temperature, of capsule materials.

Chemical analytical techniques such as high-performance liquid chromatography, gas chromatography-mass spectrometry, and spectroscopy are often coupled with a controlled-release test, such as standardized U.S. Pharmacopeia methods (www.usp.org), to establish a release profile.

Structural Design Approach
Encapsulation has become much more important with the development of nutraceuticals and functional foods, David Julian McClements, Professor of Food Science at the University of Massachusetts at Amherst, said. Bioactive ingredients chemically degrade by exposure to light, water, and oxygen, and their breakdown is accelerated once they are incorporated into foods. So there’s a real need for encapsulation, particularly for beverages and water-based foods.

Some compounds are not very biologically available, he said, and encapsulation can increase their bioavailability and make them more effective. However, he added, the capsule structure must be stabilized so it doesn’t break down before it is consumed, changing the performance of the product within the body.

The glassy matrix—usually consisting of proteins, sugars, and/or other carbohydrates—of most powdered capsules can protect against oxygen and other causes of breakdown of encapsulated substances, but once the powders are incorporated into an aqueous product, they lose the encapsulation matrix. Foods contain lots of water, and transparent products let in light. Both lead to breakdown of the delivery system, he said, so going from traditional powder technology to wet systems has many more challenges.

McClements said that the lack of effective delivery systems to encapsulate bioactive lipophilic compounds, such as omega-3 fatty acids, conjugated linoleic acid, tributyrin, vitamins, antioxidants, carotenoids, and phytosterols, which have been identified as providing potential health benefits, is hindering the development of functional foods designed to combat coronary heart disease, diabetes, hypertension, and cancer. Accordingly, he and his coworkers are focusing on design of encapsulation structures for delivery of lipophilic components.

There are technical challenges that must be overcome before a bioactive lipid can be successfully incorporated into an aqueous-based food, he said. Lipophilic bioactive components come in a wide variety of different molecular forms, resulting in differences in their physicochemical and physiological properties, such as chemical stability, physical state, solvent solubility, rheology, optical properties, and bioavailability. Consequently, different delivery systems are usually needed for each type of bioactive lipid component.

McClements said that, among other things, an edible delivery system for lipophilic bioactive components needs to have a high loading capacity (a sufficient amount of bioactive for the purpose) and retention efficiency; protect the bioactive from oxidative or other degradation; not adversely affect the product’s appearance, flavor, texture, or shelf life; be resistant to environmental stresses on the product that occur during production, storage, and transport; and be designed to control the release and/or absorption of the bioactive at a particular site within the gastrointestinal (GI) tract, such as the mouth, stomach, small intestine, or large intestine.

There is a whole range of delivery systems that can be made to encapsulate lipophilic bioactives, he said, including simple solutions, powders, colloids, biopolymer matrices, conventional emulsions, microemulsions (5 nm – 50 nm in diameter), nanoemulsions (10 nm – 100 nm in diameter), multiple emulsions, and multilayer emulsions. Some structures are quite difficult to make and overly expensive, he said, and if they are too sophisticated they can break down in production and storage. So more-sophisticated designs need a more-sophisticated production system. It’s more complex than just mixing, he added.

McClements and his coworkers have been using layer-by-layer electrostatic deposition to prepare nanolaminated coatings. They first prepare an oil-in-water emulsion by homogenizing an oil with an aqueous phase in the presence of an ionized water-soluble emulsifier; then they add an oppositely charged biopolymer so that it adsorbs on the droplets, forming a two-layer coating. They form more biopolymer layers by successively adding charged materials with opposite charges.

Properties affecting the performance of an emulsion-based structured delivery system, McClements said, include the composition of the particles; the type of structure; the size, shape, and thickness of the components used to construct the particle; the ratio of solid to liquid within the structure; partitioning of phases within the structure; the physical integrity of the particle; the permeability of particle components; and the digestibility of the particle. The ability of a structured particle to deliver the payload at the desired location in the GI tract depends on its susceptibility to digestion by lipases, proteases, and amylases. This can be controlled by selecting components with different enzyme digestibility to construct the particle. Since proteins are primarily digested in the stomach or small intestine, dietary fibers and resistant starches primarily in the colon, and starches mainly in the mouth, stomach, and small intestine, he said, the relative positioning of these components within the structured particle is therefore important for controlling digestibility.

McClements and his coworkers have studied the effect of their multilayered nanoemulsion coatings on the digestibility of encapsulated lipids and have found them suitable for controlling the bioavailability of lipids within the GI tract. They are working to better understand the performance of these systems.

Key in testing the efficacy of encapsulation and delivery, McClements said, are the size and charge of particles, normally determined by light scattering. Microscopy (optical or electron) gives morphology. Also important are loading capacity (how much of the active ingredient can be encapsulated), stability (change over time), and optical property (transparent or opaque). Products containing very small particles tend to be transparent, while those with larger particles tend to be opaque. In vitro and in vivo tests can determine how much of the encapsulated material is actually absorbed by the human body. Useful in this context are artificial human GI tracts, the subject of the column “Simulating Digestion” in the December 2010 issue of Food Technology.

McClements and his colleagues want to prevent the physical breakdown of a substance by encapsulating it, he said, but the capsule must be stable and not affect the stability and performance of the product it is in. They also need to make sure that the active ingredient is not encapsulated so well that it is not absorbed by the body, he cautioned.

Encapsulation Conferences Scheduled
Microencapsulation and Particle Coating Course, organized by the Center for Professional Advancement and directed by James Oxley of Southwest Research Institute, will be held in Burlingame, Calif., February 2–4, 2011. For more information, visit www.cfpa.com.

4th International Symposium on Delivery of Functionality in Complex Food Systems, titled “Physically Inspired Approaches from the Nanoscale to the Microscale,” organized by Alejandro G. Marangoni of the University of Guelph, will be held August 21–24, 2011, in Guelph, Ontario, Canada. For more information, visit www.uoguelph.ca/foodscience/content/delivery-functionality-complex-food-systems.